The Metro began operating in Moscow in 1935 with a single 11 km line connecting just thirteen stations, but it has since grown into the world’s fourth busiest transit system, spanning more than 300 kilometers and offering 188 stops along the way.
The Moscow Metro was one of the USSR’s most extravagant architectural projects, with stations constructed as luxurious “palaces for the people”. Built under the command of Stalin, the iron-fisted leader ordered the metro’s artists and architects to design a structure that embodied svet (radiance or brilliance) and svetloe budushchee (a radiant future). He directed his architects to design structures which would encourage citizens to look up, admiring the station’s art, as if they were looking up to admire the sun and—by extension—him as a god. With their reflective marble walls, high ceilings and grandiose chandeliers, many Moscow Metro stations have been likened to an “artificial underground sun”..

Komsomolskaya opened in 1935. The station has tall pillars faced with pinkish limestone and blue-grey marble and the floor is tiled with grey granite. The imposing Baroque celling, painting in yellow is decorated with eight mosaic panels of smalt and precious stones. The theme of the panels represent the Russian fight for freedom and independence throughout history. 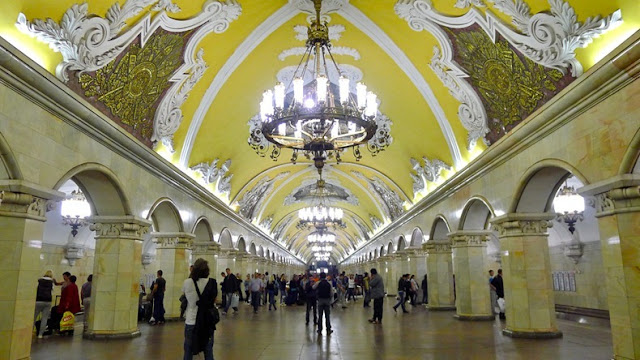 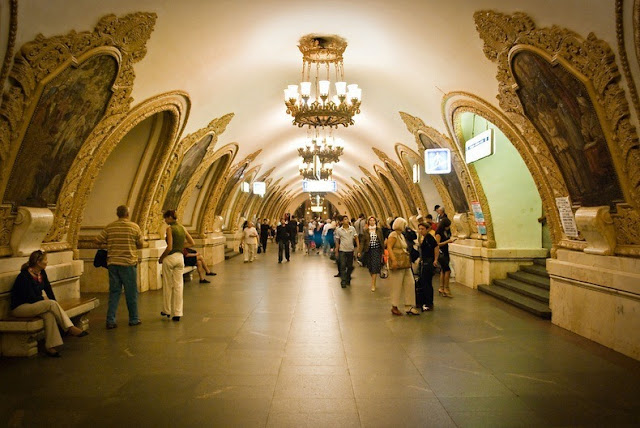 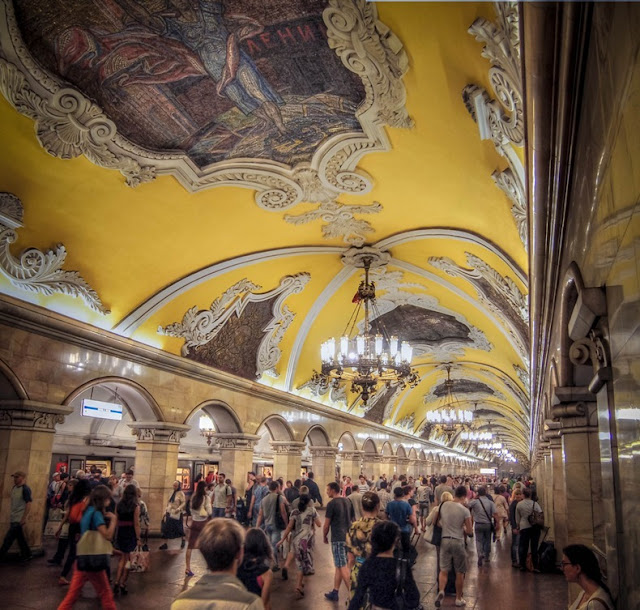 Built in 1952, Novoslobodskaya is best known for its 32 stained glass panels, which are the work of Latvian artists E. Veylandan, E. Krests, and M. Ryskin. Each panel, surrounded by an elaborate brass border, is set into one of the station's pylons and illuminated from within. Both the pylons and the pointed arches between them are faced with pinkish Ural marble and edged with brass molding. At the end of the platform is a mosaic by Pavel Korin entitled "Peace Throughout the World." 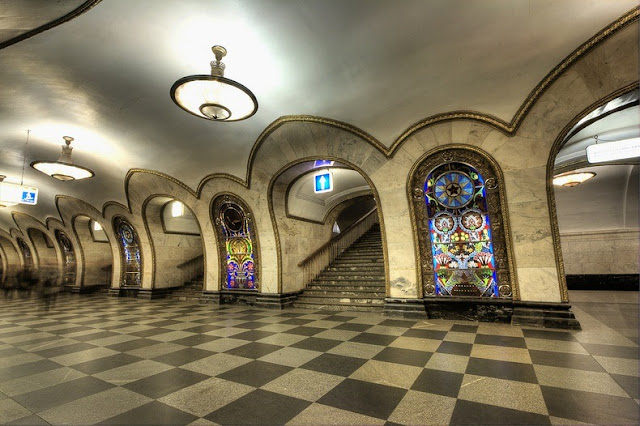 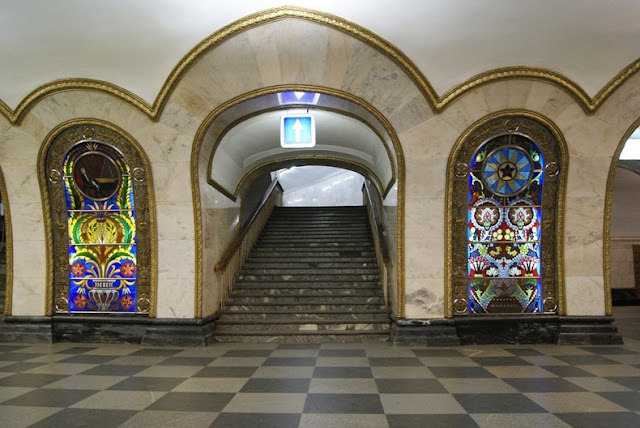 Mayakovskaya is considered to be one of the most beautiful station in the system. Based on a Soviet future as envisioned by the poet Mayakovsky, the station features graceful columns faced with stainless steel and pink rhodonite, white Ufaley and grey Diorite marble walls, a brilliant flooring pattern of white and pink marble, and 35 niches, one for each vault. Surrounded by filament lights there are a total of 34 ceiling mosaics by Alexander Deyneka with the theme "24-Hour Soviet Sky." A passenger can look up and see the bright Soviet future right above him.
Located 33 meters beneath the surface, the station became an air raid shelter during World War 2. On the anniversary of the October Revolution, on 7 November 1941 Joseph Stalin addressed a mass assembly of party leaders and ordinary Muscovites in the central hall of the station. 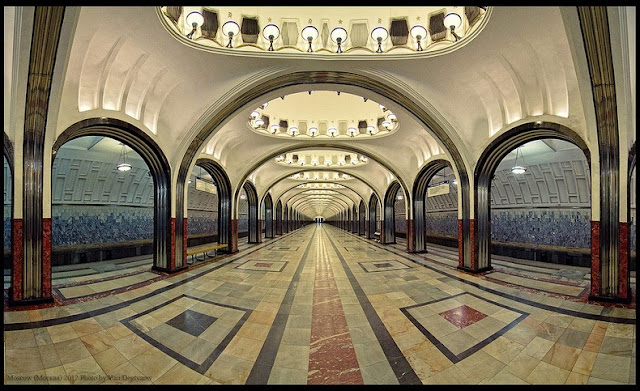 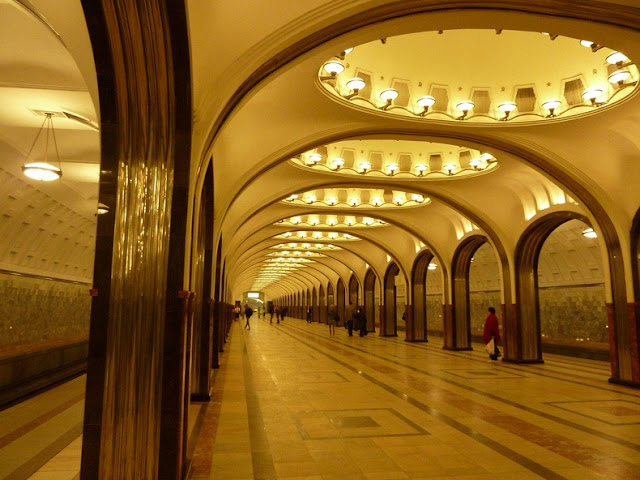 Named after the electric light bulb factory nearby, the ceiling of Elektrozavodskaya is covered with six rows of circular incandescent inset lamps of which there were 318 in total. There are 12 marble bas-reliefs on the pylons highlighting the nation’s struggle in the World War. Other pylons carry decorative gilded grilles depicting hammer and sickle. 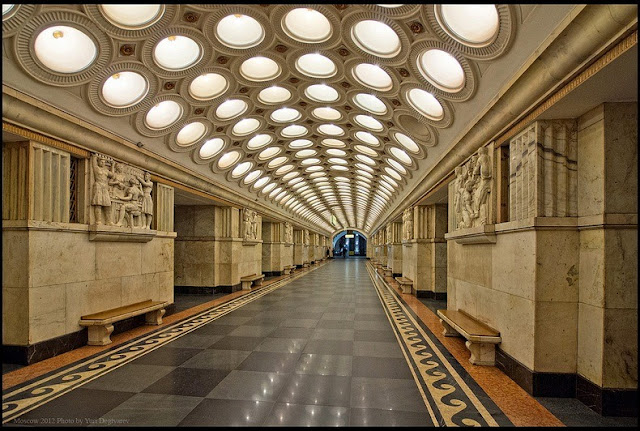 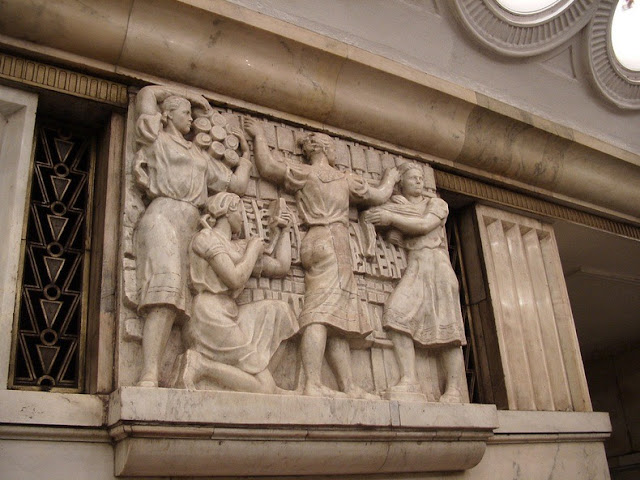 The design theme of the station is the struggle for freedom during Russia's history. Shosse Entuziastov station is decorated in various colours and shades of marble, with colours ranging from dark grey to yellow. Sculptures and pictures relating to revolutionary subjects adorn the walls. On the western end of the central hall there is a large sculpture — "Flame of Freedom" — designed by A. Kuznetsov. 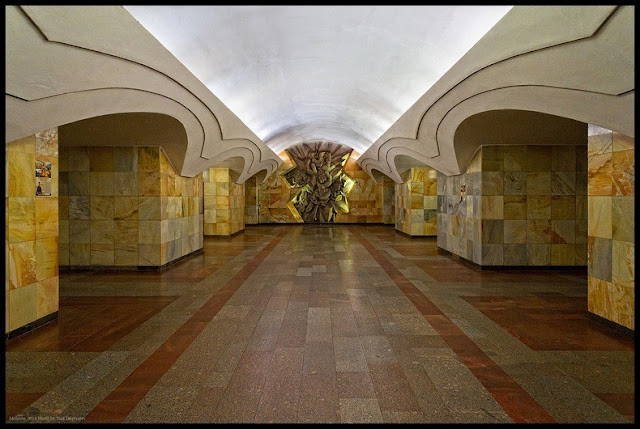 Ploshchad is decorated with 76 sculptures one cut into each corner of each column, arranged thematically moving from parents with their children to athletes, students to farmers, industrial workers to hunters to soldiers. There is also a frontier guard with a dog whose nose people rub for good luck. 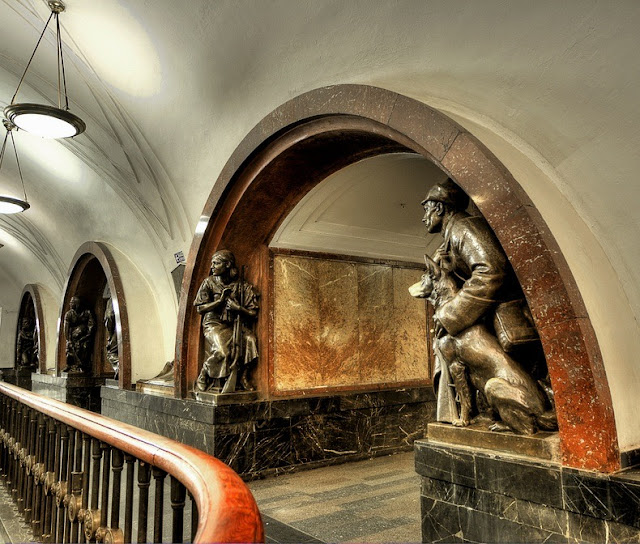 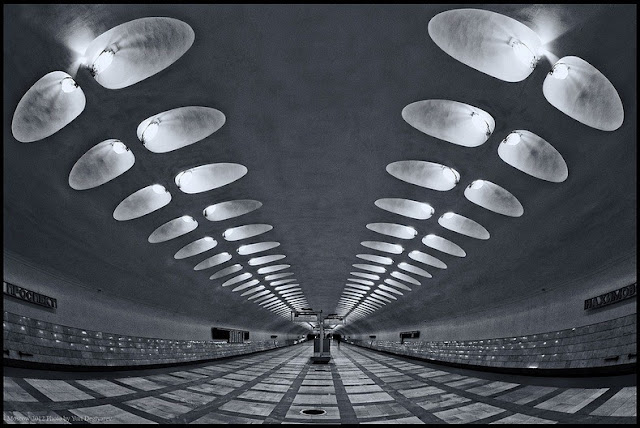 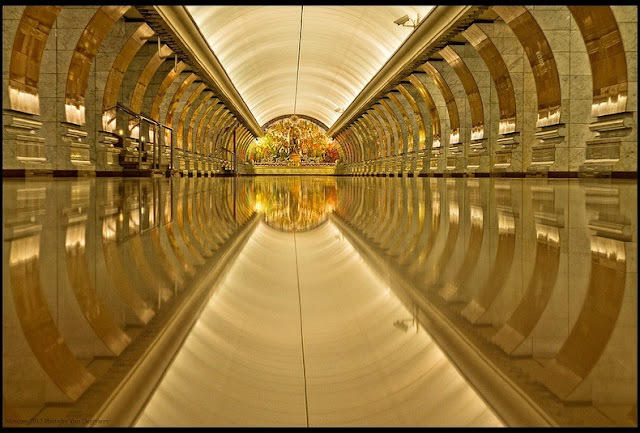 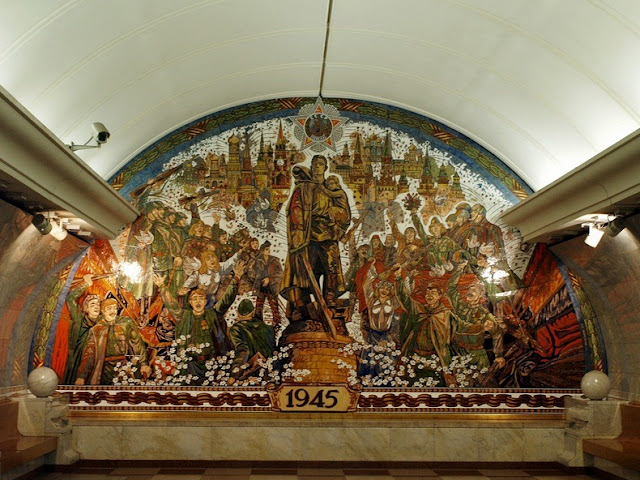 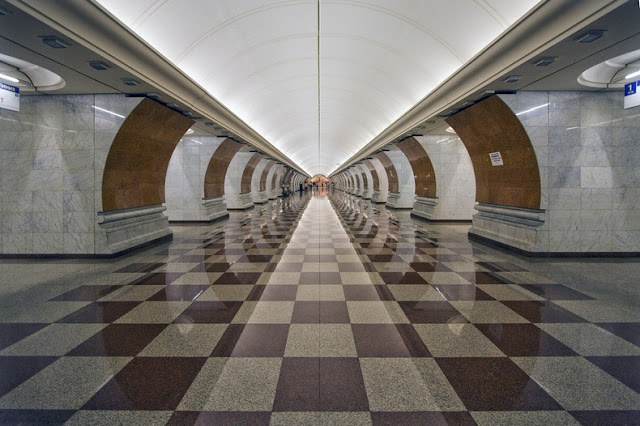 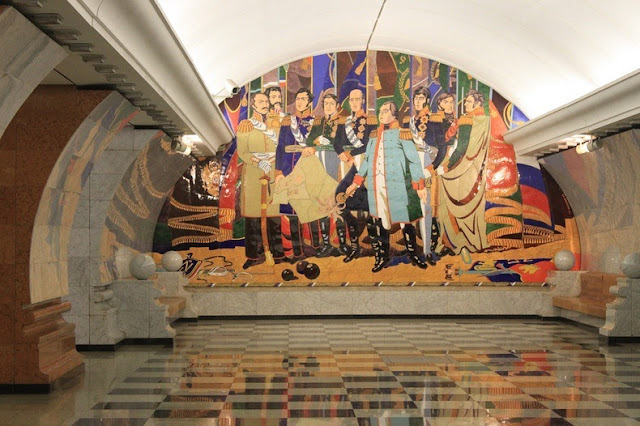 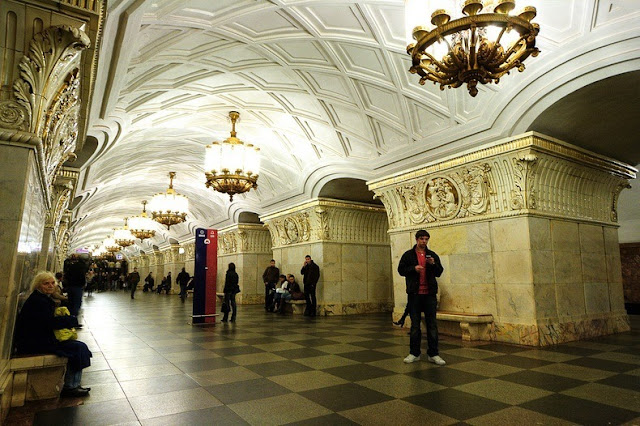