War memorials are a familiar sight in towns and villages across Britain, somberly remembering the sacrifices made by millions of ordinary young men in the First World War. But there are a handful of villages where, until recently, there were no war memorials. Do not be mistaken for these villages did their part in the war, sending their men to fight for their country shoulder to shoulder with others from every other village in the land. But by some extraordinary strokes of good fortune, none of these villages suffered a single casualty. All the men that went off to war from these villages returned back alive to their homes. This was such a statistical improbability that out of 16,000, there only 53 such villages in all of Britain. These villages are called Thankful Villages. 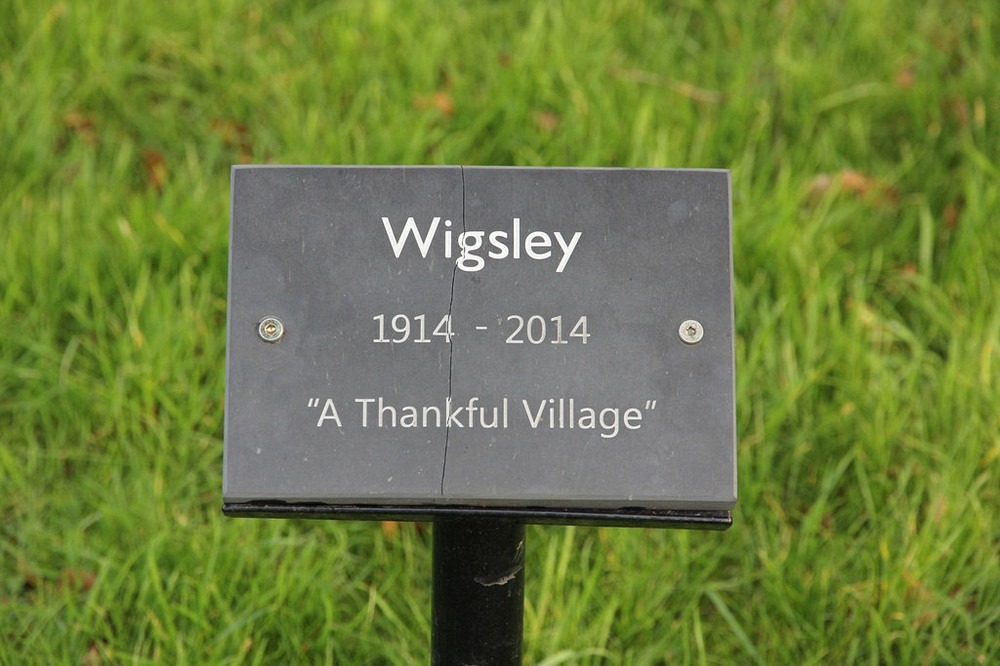 Wigsley's 'Thankful Village' plaque presented to the people of Wigsley by Medwyn Parry and Dougie Bancroft in 2013. Photo credit: Richard Croft
The term Thankful Village was coined by British writer and journalist Arthur Mee in the 1930s in his The King’s England, a guide to the counties of England. Mee initially identified 32 villages, but recent research has found that there are at least 53 such parishes distributed across England and Wales. No Thankful Villages have been identified in Scotland or Ireland yet. Additionally, researchers found 14 parishes that were lucky enough to have lost no men during the Second World War as well. These villages are called “doubly thankful”.
Strangely enough, for decades, these communities found it impossible to celebrate their good fortune. When grief shrouded thousands of communities everywhere, the handful of thankful villages experienced not elation but embarrassment and shame to not be in mourning like everyone else.
“They were surrounded by villages where people were not returning,” explained the Reverend Michael Hampson from the thankful village of Arkholme in Lancashire. “For example, just up the road in Whittington the big landowning family there lost two generations in the war. That was typical around the country; the number who died was devastating. For the thankful villages, it was almost as if they had not joined in the sacrifice. They benefited from the peace after the war but felt like they had not paid the price.”
Few villagers had the stomach for drawing attention to their good fortune. Apart from a plaque here and a lantern there, nothing remotely triumphal, to mark the safe return of all their menfolk, had ever been erected.
“There was a self-imposed silence and censorship; it was felt that it would be quite wrong to celebrate that as some kind of triumph,” Mr. Hampson said. 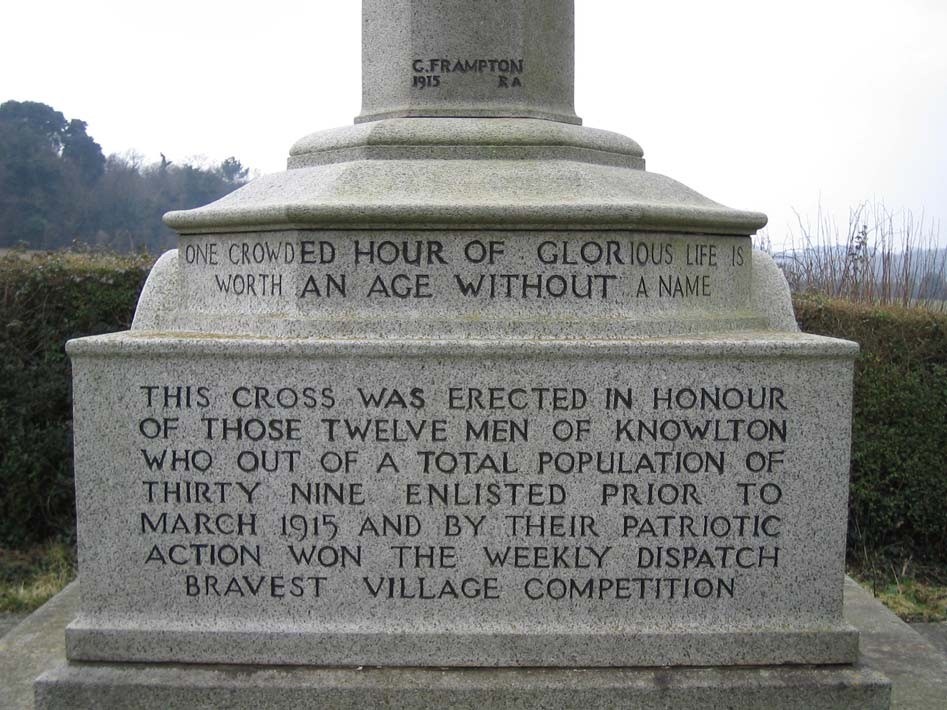 The base of the Knowlton Cross in Knowlton, Kent. Photo credit: warmemorialsonline.org.uk
The most visible memorial is perhaps at Knowlton in Kent where a cross was erected in honour of those twelve men who fought the war and were fortunate enough to return back to their families. Knowlton has another reputation of sending the biggest percentage of its population to the army—12 men, representing 31% of the 39 villagers. For this, Knowlton was dubbed the "bravest" village by a national newspaper. However, the credit for sending the most number of men (among thankful villages) goes to Arkholme, in Lancashire. It sent 59 men out of 320 inhabitants to the war. All of them returned back alive.
Another elaborate memorial is at the village of Catwick, in East Yorkshire, although it never has been on public display. When thirty men from the village went to war, the local blacksmith, a man named John Hugill, nailed a coin for each man to the doorpost below a lucky horseshoe just inside his forge. All the men returned unhurt, except for one who left his arm behind. So John Hugill took one of the coins off, cut a piece out of it, and nailed it back again.
Two decades later, when Catwick's men went off to war again, this time against Hitler’s Germany, John Hugill performed the same coin trick. And guess what? All the men came back again, making Catwick one of those rare “doubly thankful villages”. 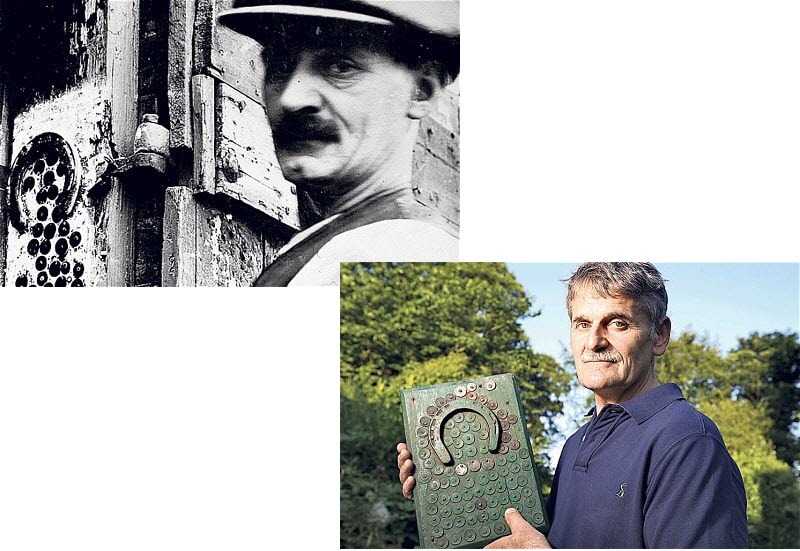 John Hugill’s grandson with the coins and horseshoe in Hull today.
In 2013, two motorcyclists, Medwyn Parry and Dougie Bancroft, toured the nation's thankful villages and presented them plaques celebrating their status.
“The aim was to take a slate plaque to every village because they don’t have a memorial,” Medwyn said. “Their contribution was just as valuable and as valid as anywhere else but there has been a silence of embarrassment because they were fortunate. Each and every one of those who went to war did us proud.”
Outside of Britain, the only other thankful village is located in France. Thierville, in Upper Normandy, was the only village in all of France where no men were lost in World War I. Remarkably, Thierville also suffered no losses in the Franco-Prussian War and World War II, nor in the First Indochina War nor the Algerian War. All the soldiers who took part in these five wars came back home. 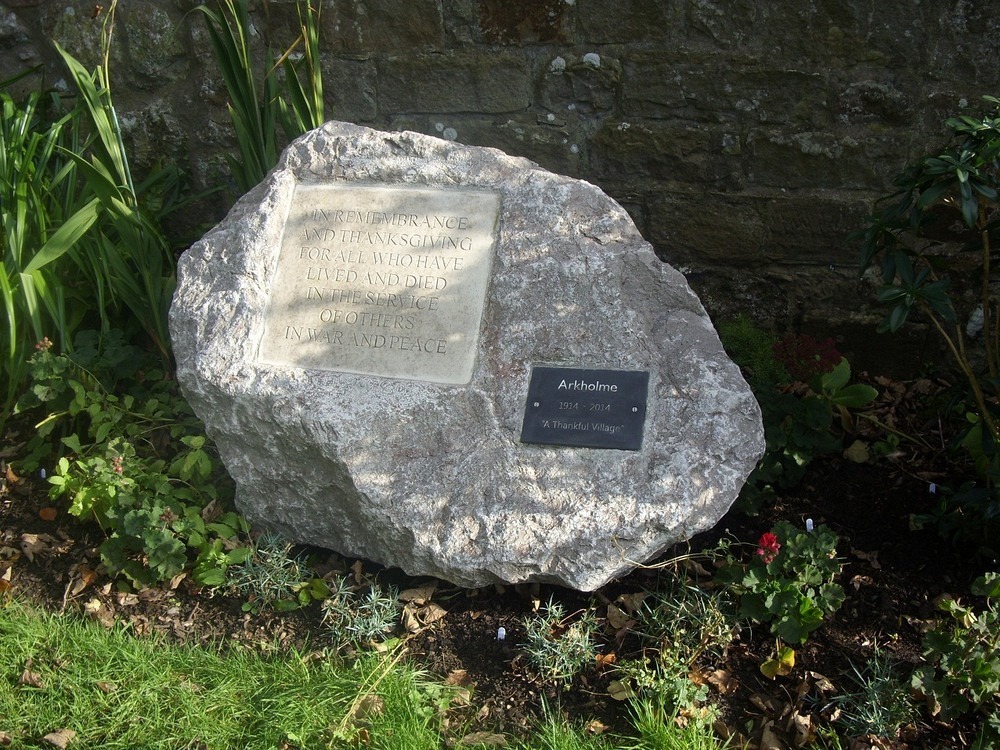 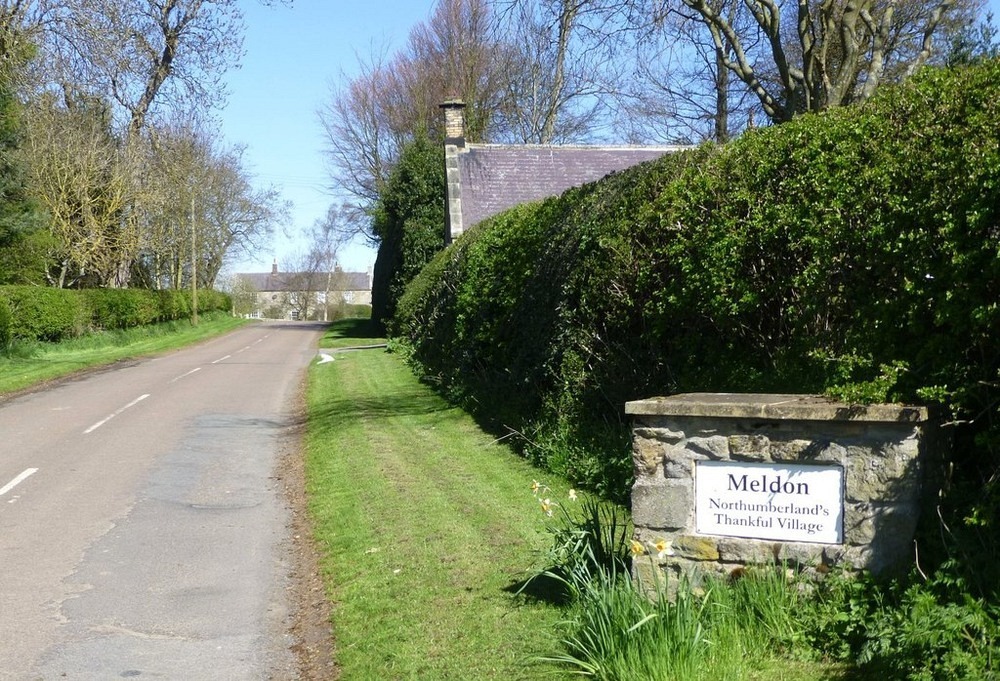 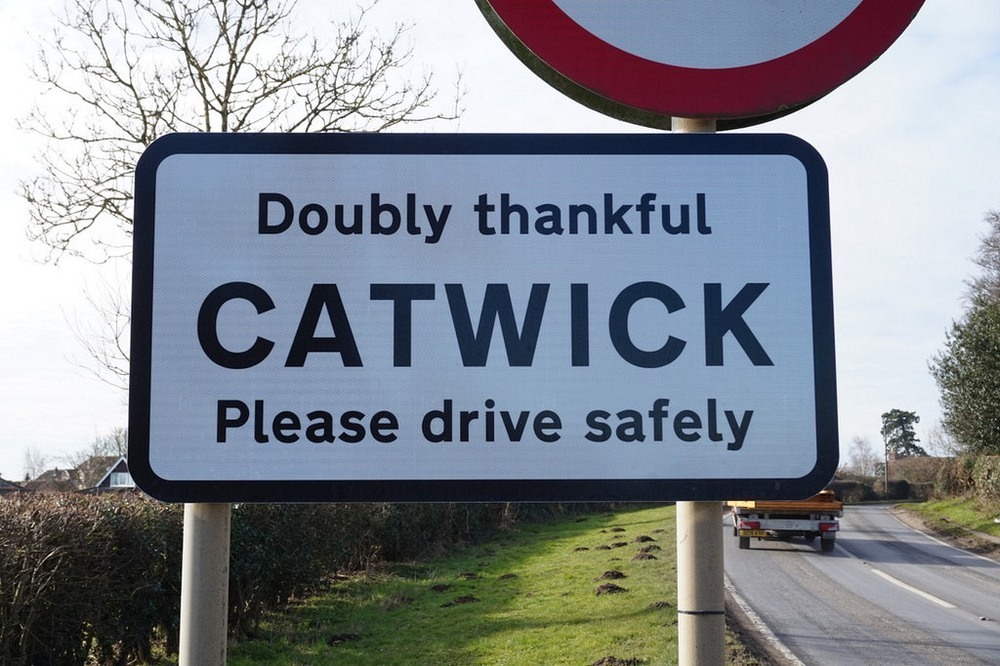 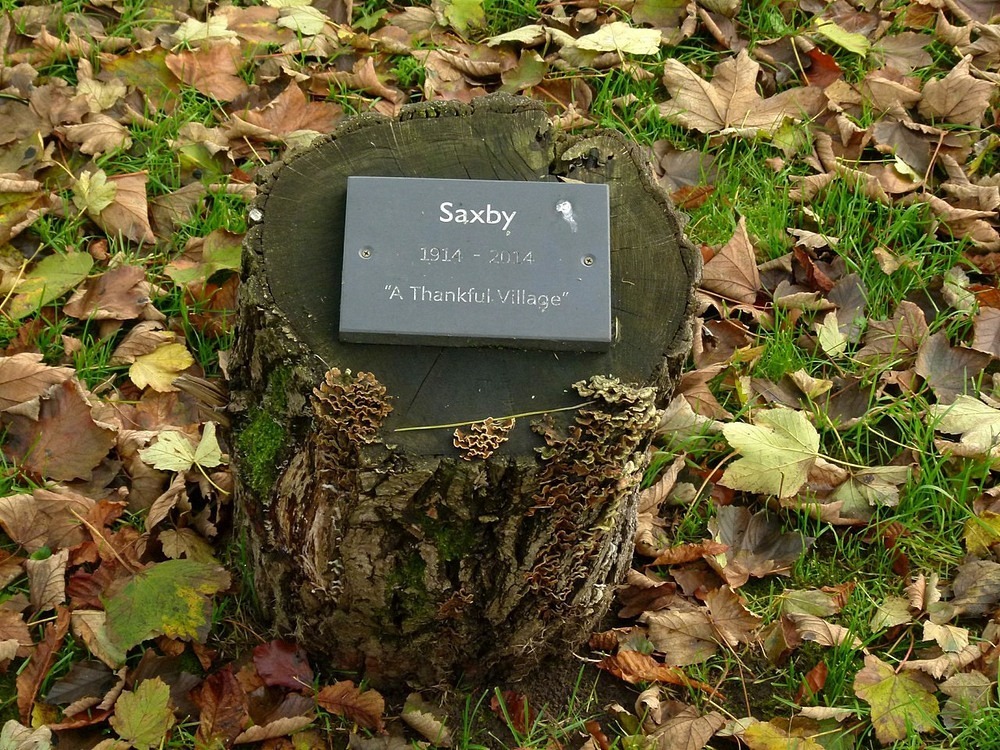 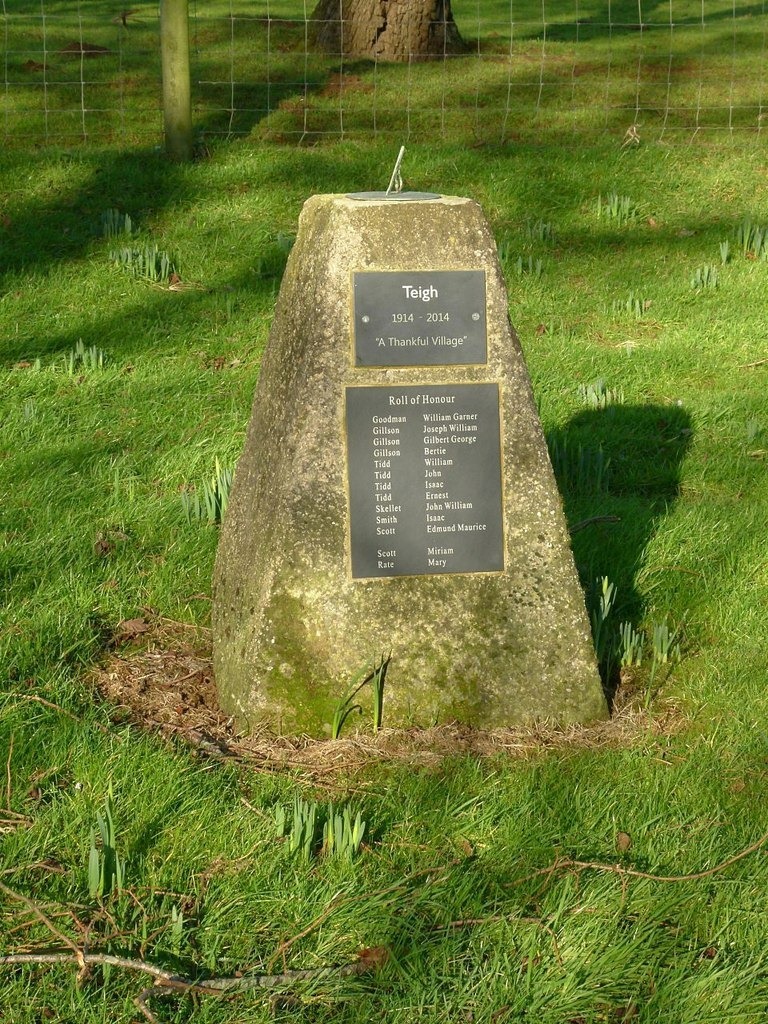 A memorial plaque and a sundial erected in 2014 in Teigh to commemorate the centenary of the start of the First World War. Photo credit: Alan Murray-Rust