In the early morning hours of June 6, 1944, thousands of Allied soldiers stormed into the beaches of northern France in what became the largest seaborne invasion in history. In the space of a single day, Operation Overlord put over 180,000 troops ashore in Normandy, creating a beachhead that eventually allowed more than 3 million Allied soldiers into German occupied Western Europe, setting the stage for the final phase of the war in Europe.
In the months leading up to D-Day, the Allied powers organized a series of training exercises involving full dress rehearsal and live ammunition in order to give the soldiers a small taste of what they would experience during the actual landings. One such rehearsal took place in a small sleepy Devon village named Slapton. 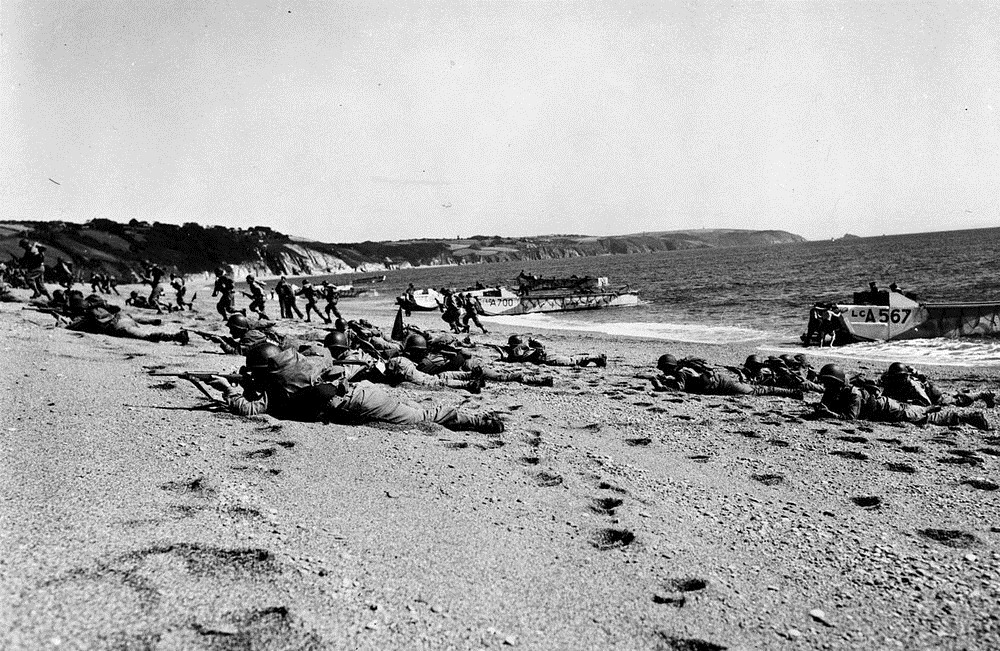 American troops landing on Slapton Sands in England during rehearsals for the invasion of Normandy.
Slapton was located on the southwest coast of England where it meets the English Channel. It was chosen because Slapton’s beach looked very similar to the one in Cotentin Peninsula, the westernmost of the five beaches along Normandy where the real assault would take place. This particular beach was code named Utah.
In late 1943, some 3,000 residents of Slapton were evacuated to make way for “Exercise Tiger”, the code name for the D-Day landing rehearsal scheduled for the following spring. The American troops who were to rehearse there were the so-called “Force U”, tasked with landing on Utah Beach.
General Dwight D. Eisenhower, the Supreme Allied Commander, wanted Exercise Tiger to be as realistic as possible. He insisted that live ammunition be used instead of blanks so that his soldiers could feel, see and even smell what a real battlefield looked like. In order to simulate the Channel crossing, the assault troops were taken on a long winding route through Lyme Bay. General Eisenhower wanted his men to experience the rough sea, he wanted his men to get accustomed to seasickness. Before the landing, there was to be naval artillery bombardment of the beach, and during the landing itself troops placed on land playing the role of German defenders were to fire live rounds over the heads of the incoming men to simulate real battlefield conditions. 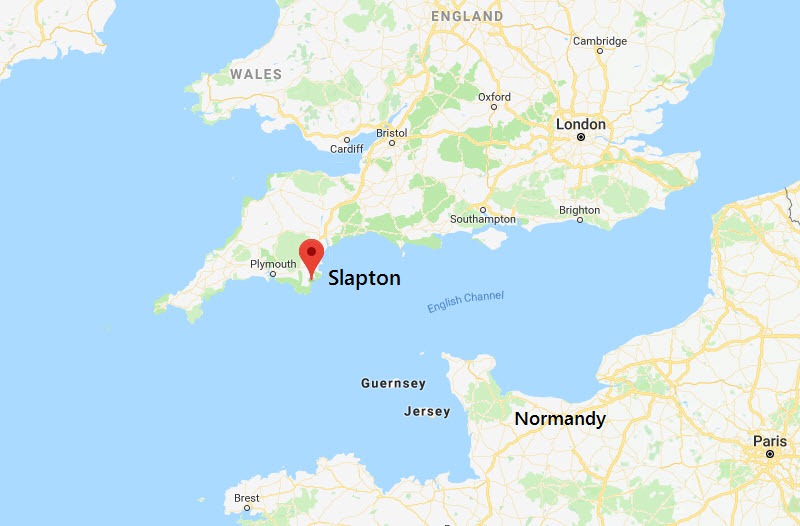 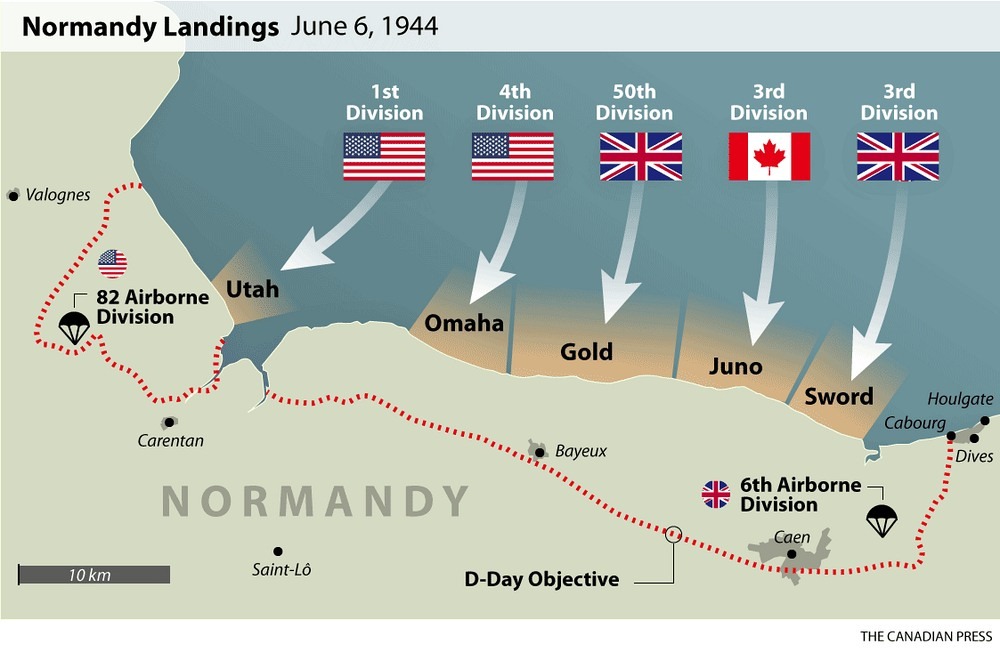 The first phase of the exercise from 22 to 25 April, 1944, went without incident. Trouble began on the morning of 27 April when some of the ships participating in the exercise fell badly behind schedule, forcing the American Rear Admiral Don Pardee Moon to delay the entire exercise by one hour. The landing was now to take place at 8:30 am instead of 7:30 am. Unfortunately, this crucial information was not adequately relayed to all ships.
Some of the landing crafts, unaware of the rescheduling, landed on the beach just when the rescheduled naval bombardment began raining shells down on the unsuspected men. Then for some perplexing reasons, the mock German troops on land began mowing down their comrades on the beach with gunfire.
Royal Engineer Jim Cory watched in horror from an observation post as soldiers streaming from landing craft were 'mown down like ninepins'. Cory counted 150 bodies before he fled.
“What he saw that day tormented him until his death last year,” wrote the Guardian. “His widow, Mary, who recounted his story last week, said: 'He always hoped that one day he would get an official answer.'”
The men’s uncharacteristic behavior was never fully explained. 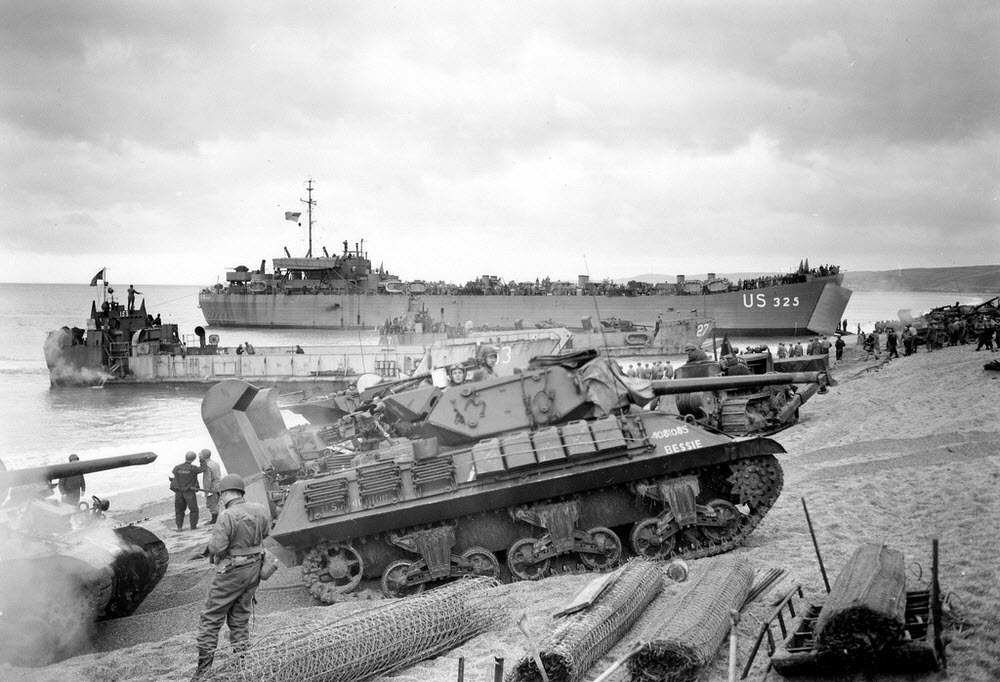 Rehearsal landing in Slapston Sands
As many as 450 men may have been killed on the beach that day. Yet there is not a single official mention of the incident in Army records. The entire exercise was hushed up for fear of embarrassment to the Allies, and those who survived were sworn to secrecy by their superiors. All the dead were hastily buried in a mass grave nearby, and a couple of months later the bodies were secretly transported by trains to an unknown location. It’s only about forty years ago that details of the massacre started to surface as curious locals began to question the skulls and bones, and other military artifacts that periodically washed up ashore on Slapton and on nearby beaches over the decades.
The incident of the ‘friendly fire’ on Slapton beach wasn’t the only fiasco during Exercise Tiger. The very next day, a convoy of eight landing crafts unexpectedly bumped into a group of nine German E-boats patrolling Lyme Bay. Of the two ships assigned to protect the convoy, only one was present; the other was at Plymouth undergoing repairs. The convoy was like sitting ducks. Torpedoes tore into the vessels and blew them apart. 300 more American troops were dead, taking the toll to over 750. 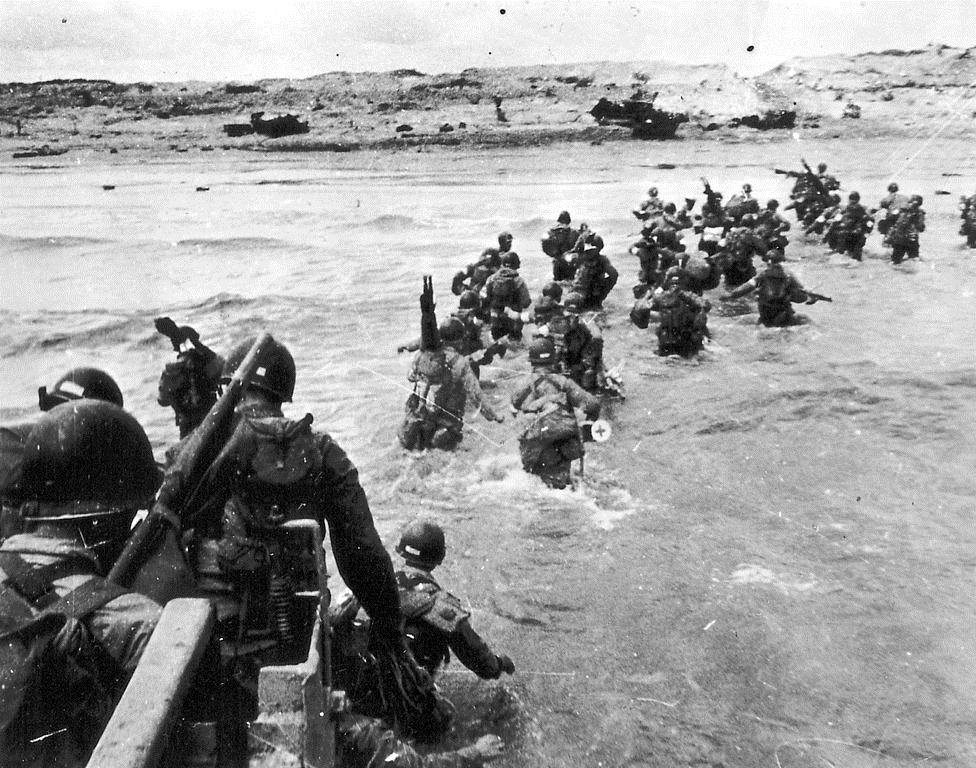 Landing on Utah beach in June 1944.
There’s a surprising amount of confusion about the final death toll. Estimates range from 749 to 946—a figure that is all the more staggering when you realize that more people were killed in the rehearsal for the landing at Utah Beach than the actual landing itself—197 were killed in action at the Utah Beach landing on June 6, 1944.
The lessons learned from that grim episode eventually helped lower casualties during the actual Normandy landings. Many men during the T-4 convoy attacks drowned because they were not properly trained to put on their life vests. Better life jacket training was put into place, and troops were trained how to pick up survivors floating in the water. The most important change was that they fixed their broken communication system by standardizing the radio frequencies so that miscommunication could never happen on the big day. 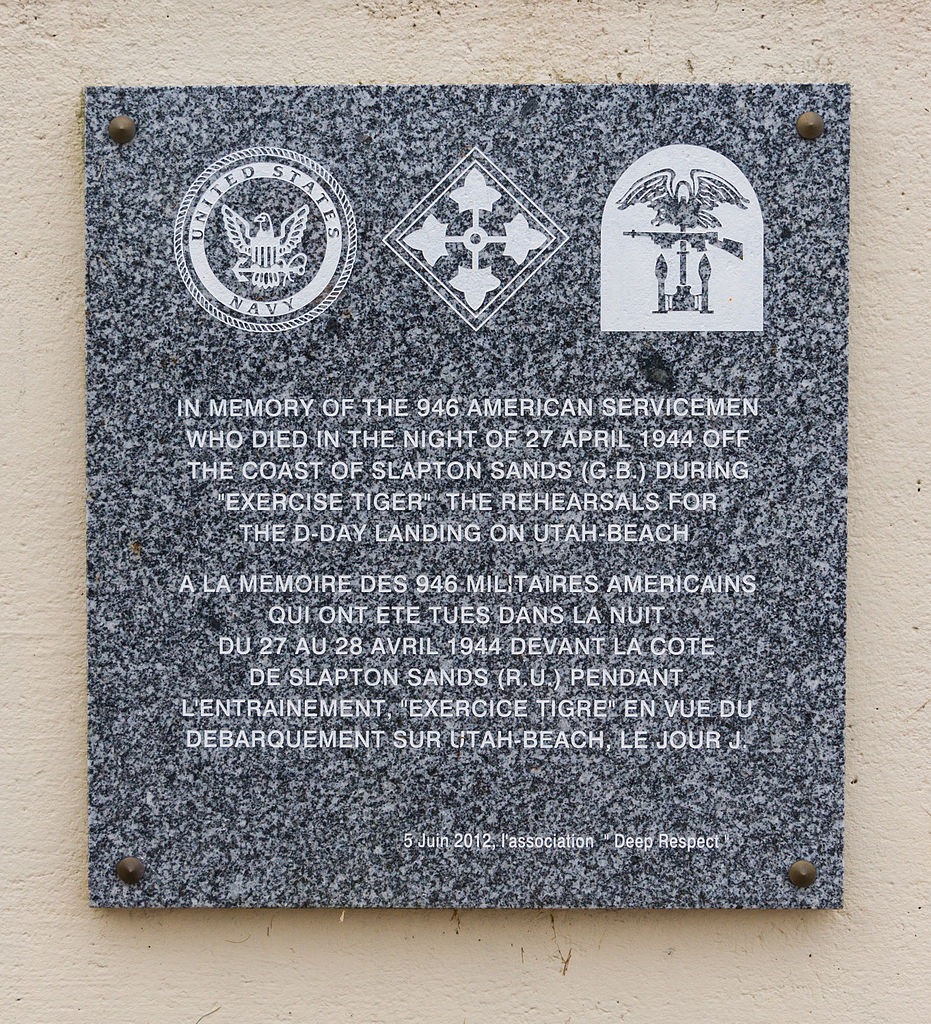 A Memorial plaque at Utah Beach. Photo credit: Jebulon/Flickr
The Allied organized more landing exercise on English beaches over six phases after the Exercise Tiger fiasco. This one was code named Exercise Fabius. The 1st and 29th American Infantry Division returned to Slapton Sands to rehearse the landing on Omaha Beach. As if on a curse, the Omaha beach landing turned out to be the most difficult and bloodiest of all Normandy landings with American troops suffering between 2,000 and 4,700 casualties.
After the war, the US army presented a memorial which now stands on Slapton Sands thanking the villagers who left their homes to “provide a battle practice area for the successful assault in Normandy”. No mention of the lost lives was made on the memorial plaque.
In 1984, locals salvaged a Sherman Tank from the sea bed and installed it at the southern end of the beach at Slapton as a memorial commemorating those who died during Exercise Tiger. 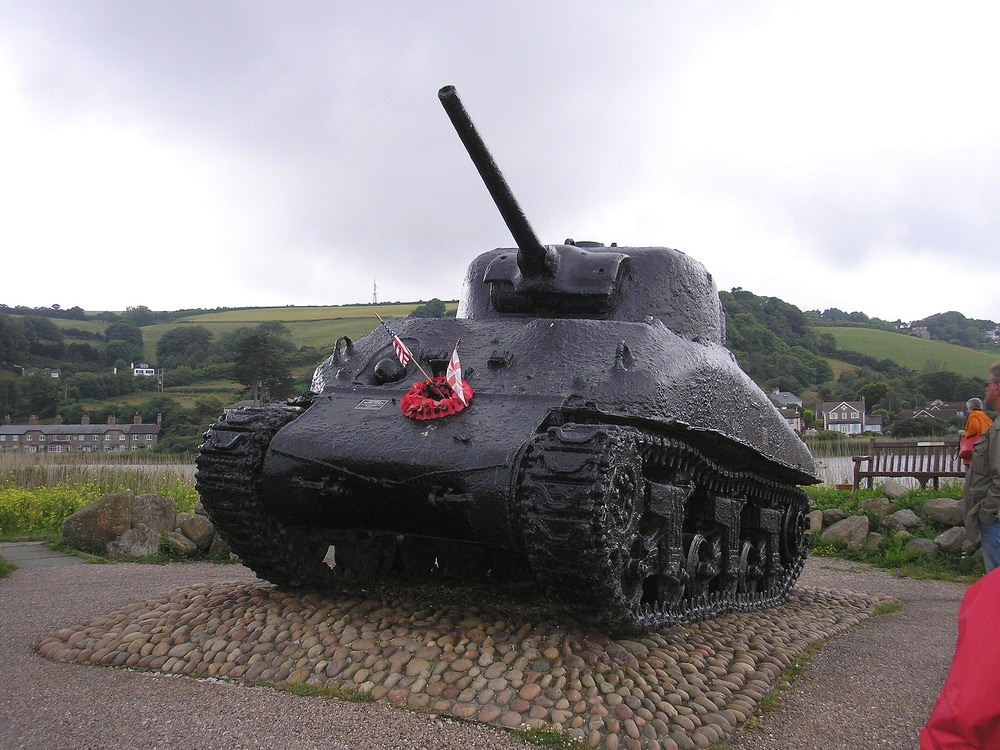 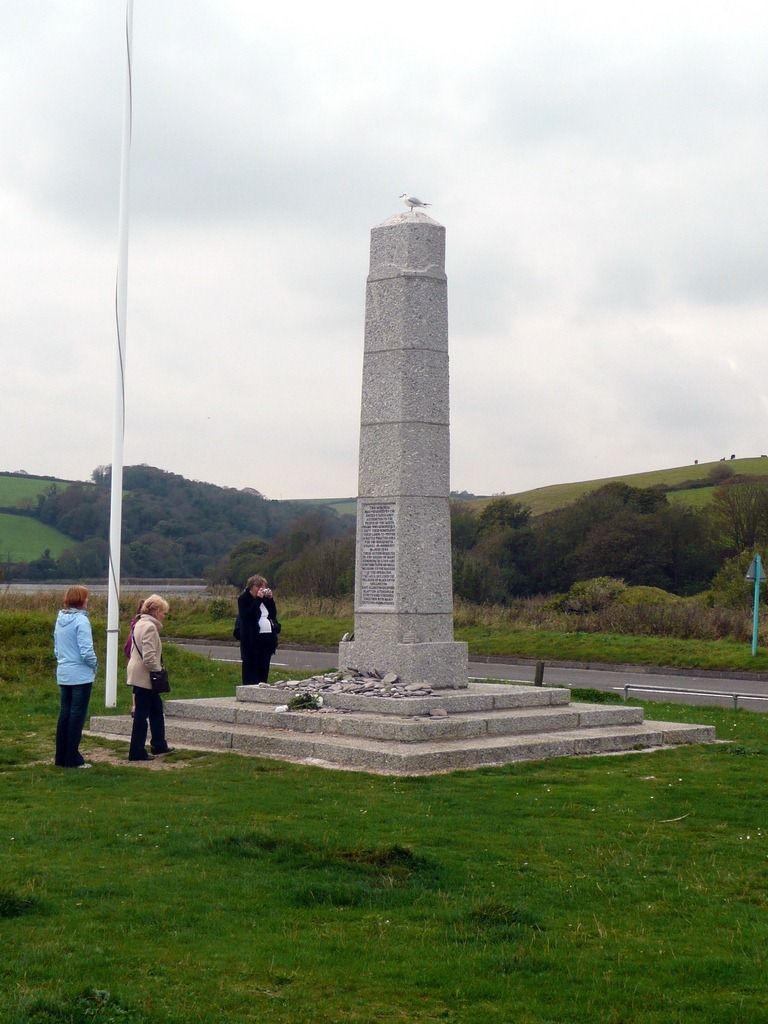 The memorial presented by the US Army to Slapton. 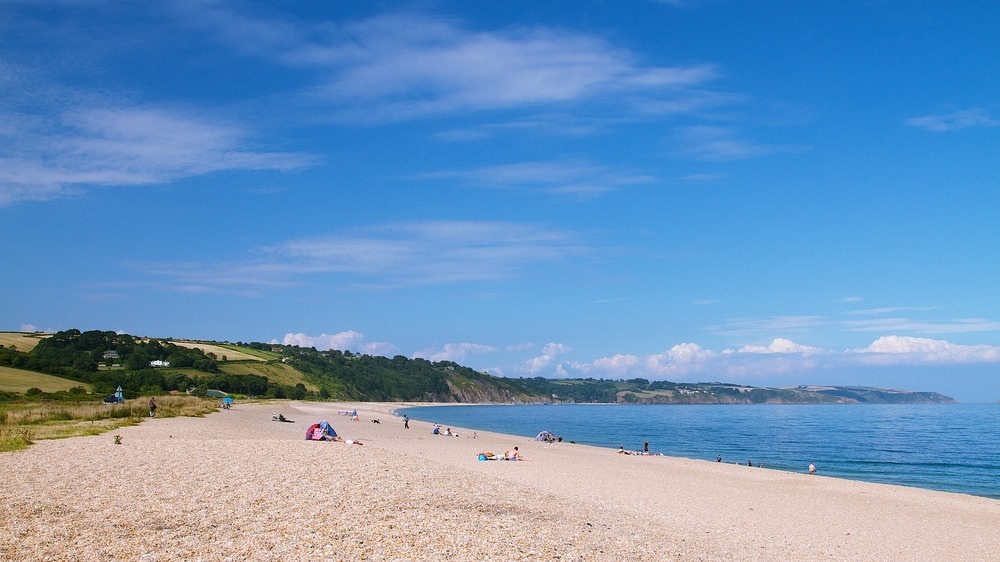