Before the start of the Second World War, women were expected to be 'housewives' or perhaps to do certain 'women's jobs', such as nursing or being a domestic servant or shop assistant. The war changed the world of work for women for ever. When men went to fight, women were called upon to fill their jobs, and this included many jobs that were previously thought of unsuitable for women. Women were called upon to work in factories making bombs and aircraft parts, as air raid wardens, driving tanks, building shops and so on. Life.com published a great collection of photos of women in various activities in the World War 2. 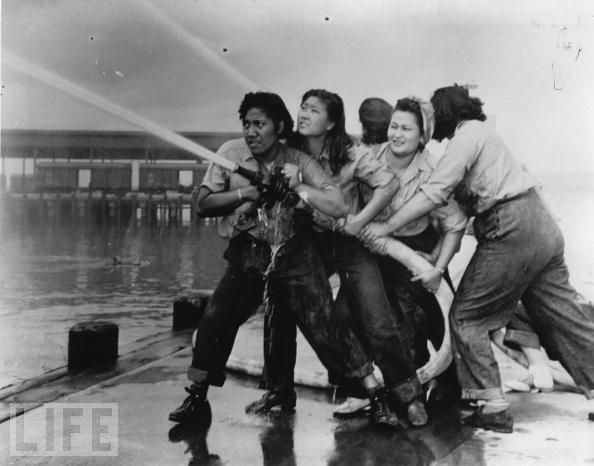 Women are on the front lines of World War II from day one, like these firefighters trying to contain the blaze during the Japanese attack on Pearl Harbor on December 7, 1941. 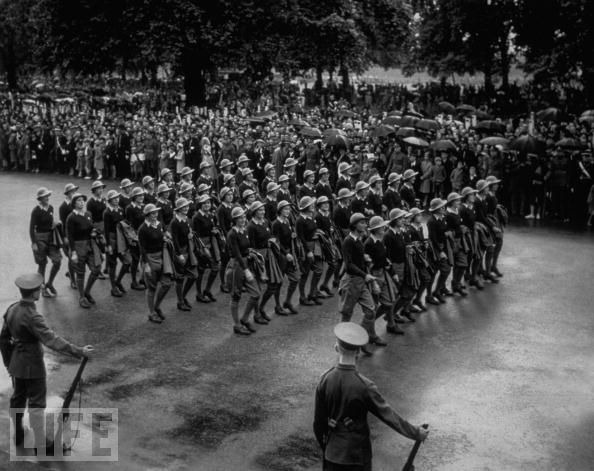 "Land Girls," volunteers in the Women's Land Service, who will replace male farm workers sent to battle, are among the 20,000 volunteers marching before King George VI in this 1939 parade in Hyde Park, London. 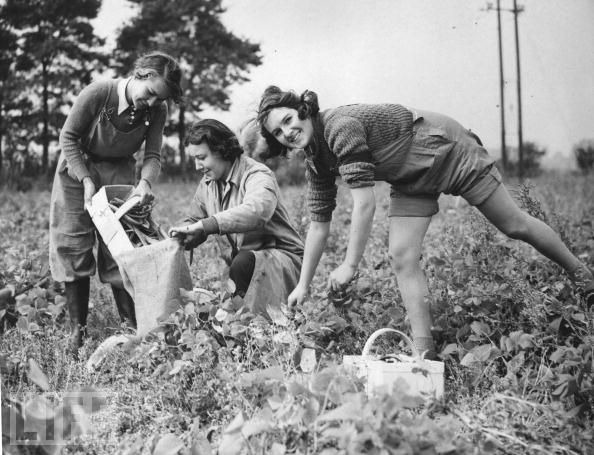 Three salesgirls from the Bourne and Hollingsworth department store in London, auxiliary members of the Womens Land Army, pick beans for the war effort. 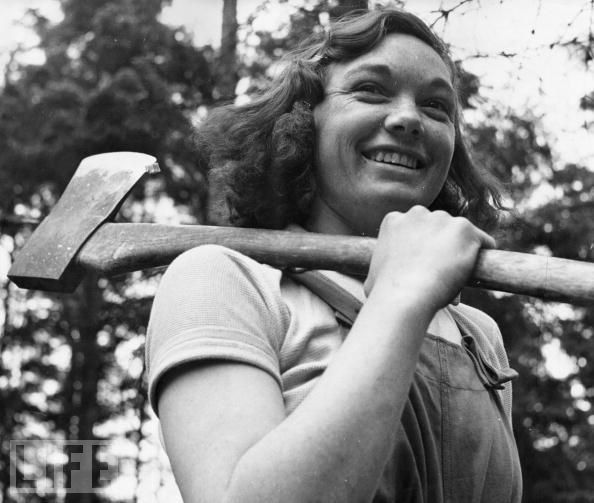 Cicely Clark is one of 4,900 members of The Women's Timber Corps, dubbed "lumberjills," at work in a timber camp in 1942 in Suffolk, England as part of the war effort. 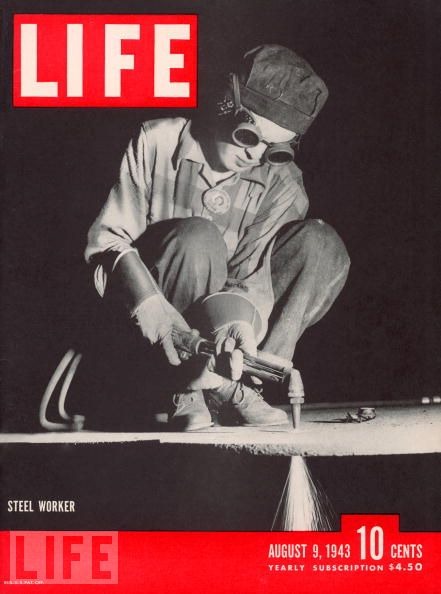 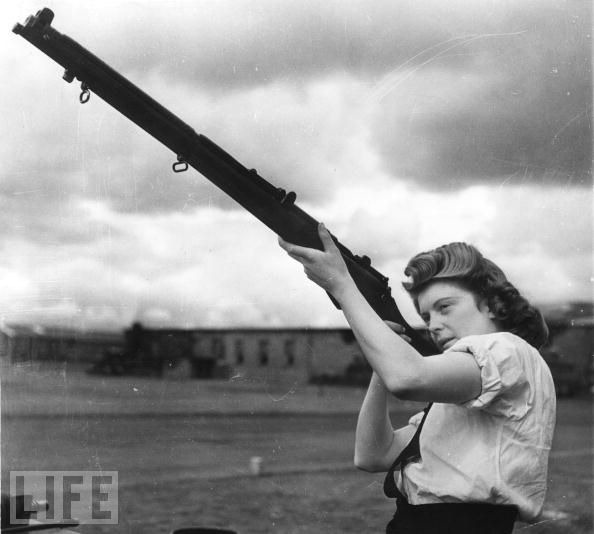 Some 72,000 women would join the Wrens (Women's Royal Naval Service), freeing British sailors for combat duty by taking on home front jobs, like this Wren, an armorer at a Scottish Royal Air Force Base. 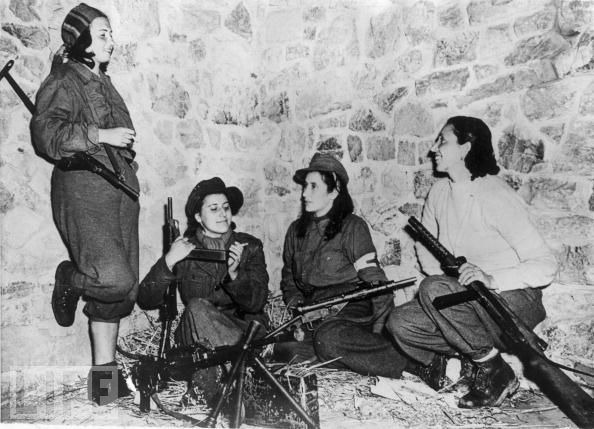 In November 1944, four female Italian anti-Fascist fighters relax as they await orders from their commander during their effort in support of Allied troops on the Castelluccio front. 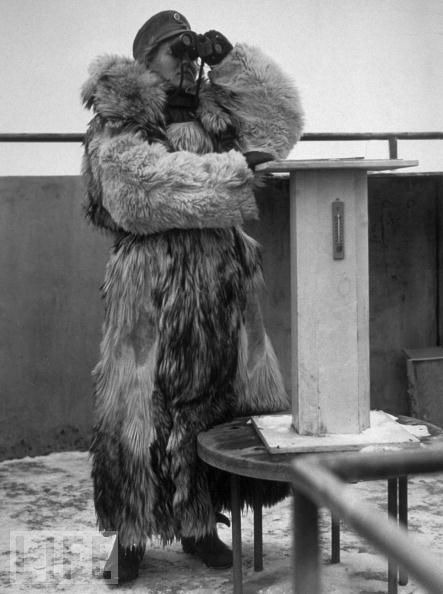 In Finland during World War II, some 242,000 women join Lotta-Svard (named for a fictional Finnish battlefield heroine), making the female paramilitary group the largest volunteer organization in the world. 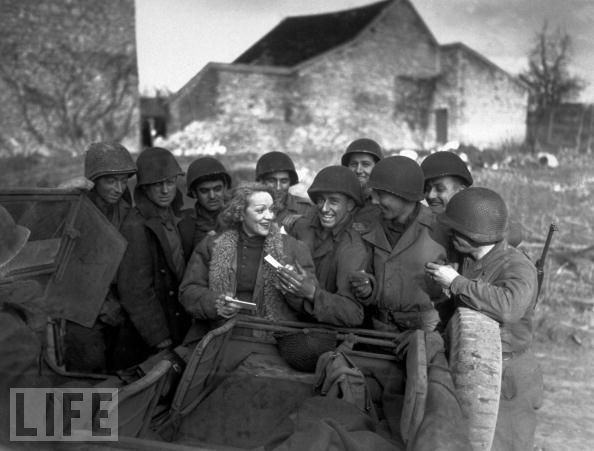 Servicemen, like these GIs in Germany in early 1945, adored Marlene Dietrich, and openly admired her fearlessness when visiting troops far from the safety of Hollywood. A native German, she became an American citizen in 1939. When asked why she traveled to war zones to entertain and comfort Allied troops, she famously and simply replied, "aus Anstand." "It was the decent thing to do." 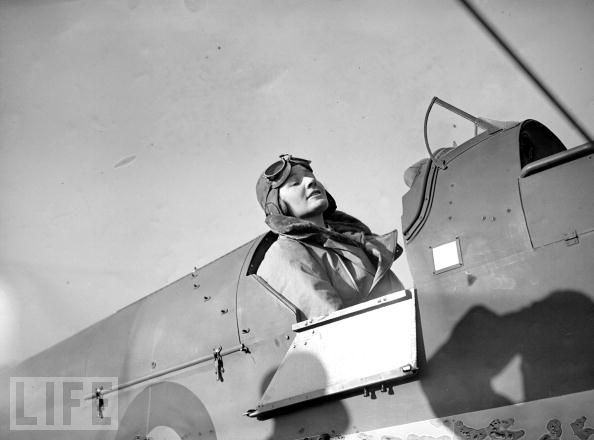 Gower, shown at her base in Hatfield, Berkshire, created the Air Transport Auxiliary's Women's Section, a squad entrusted with ferrying planes for training purposes. 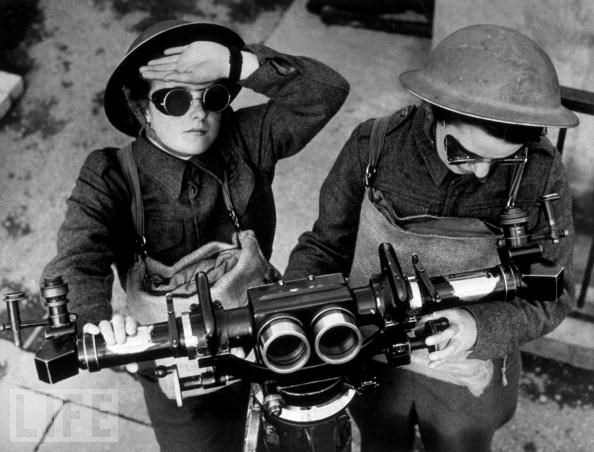 Looking out for enemy aircraft in England. 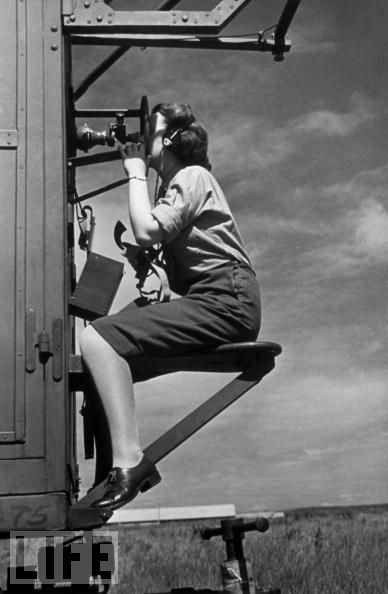 Reporting the position of enemy aircraft to gun crews 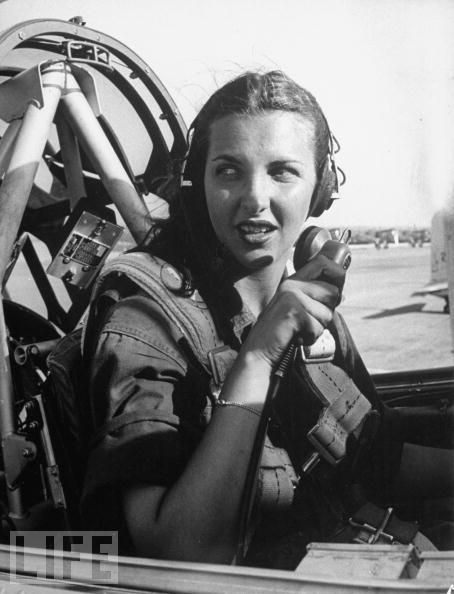 Nancy Nesbit, a pilot trainee in the Women's Flying Training Detachment checks with the control tower from the cockpit of her single engine Army trainer at Avenger Field in Texas. 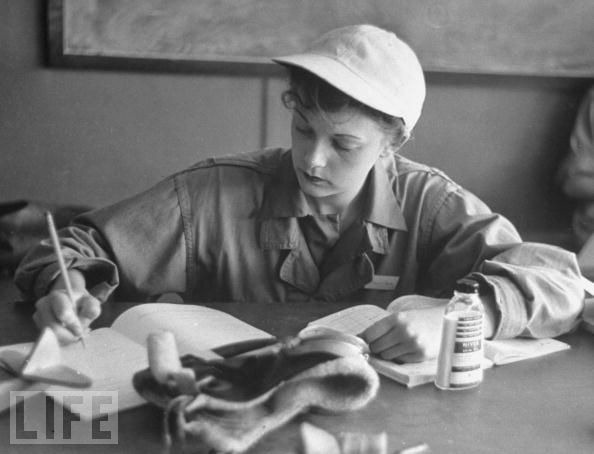 Phyliss Jarman, a pilot trainee in the Women's Flying Training Detachment, wearing her favorite white baseball cap, writes up a report in her workbook during training to fly for the Women's Auxilary Ferrying Squadron at Avenger Field in Texas. 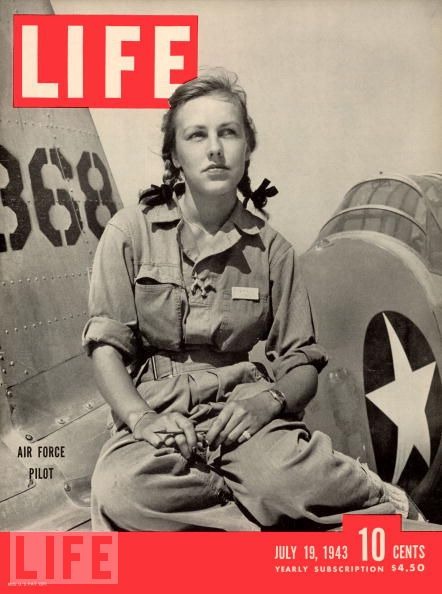 Pilot trainee Shirley Slade she sits on the wing of her Army trainer at Avenger Field, Sweetwater, Texas, July 19, 1943. In September, Slade graduated as part of the Women Airforce Service Pilots Class 43-5. 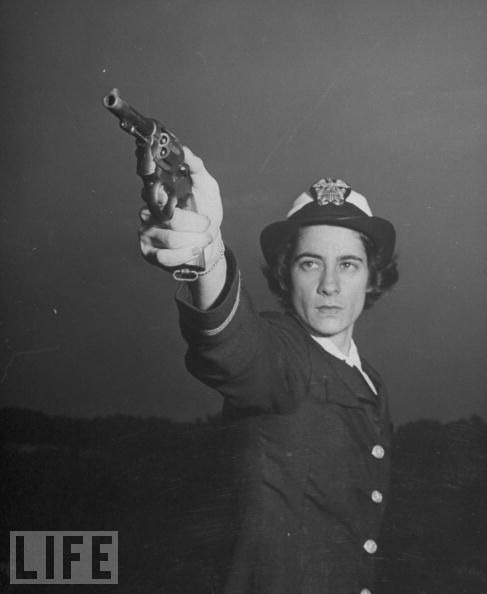 The 90,000 members of the U.S. Navy's WAVES (Woman Accepted for Volunteer Emergency Service) would serve only on the home front, but they would still get marksmanship training. 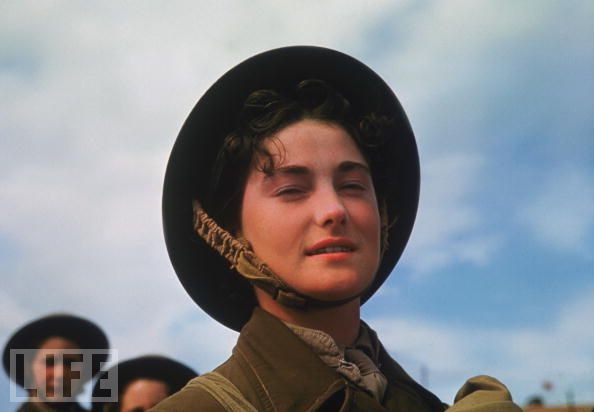 The women who volunteer for the U.K.'s Auxiliary Territorial Services (ATS) are not allowed to fight in World War II, but they do nearly every other job, like this woman at an anti-aircraft emplacement in Britain. 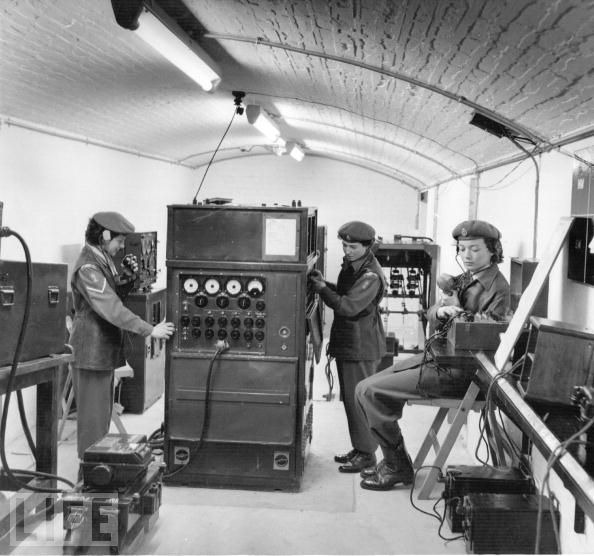 As Britain defends Gibraltar in May 1944, members of the Auxiliary Territorial Service (soon to become the Women's Royal Army Corps) train as controllers of gun batteries. 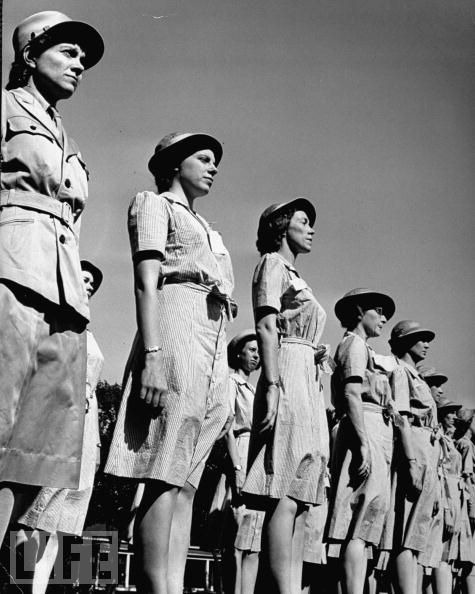 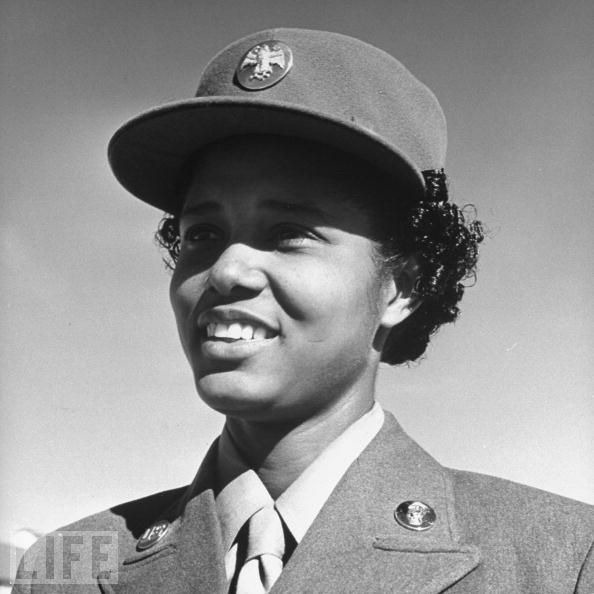 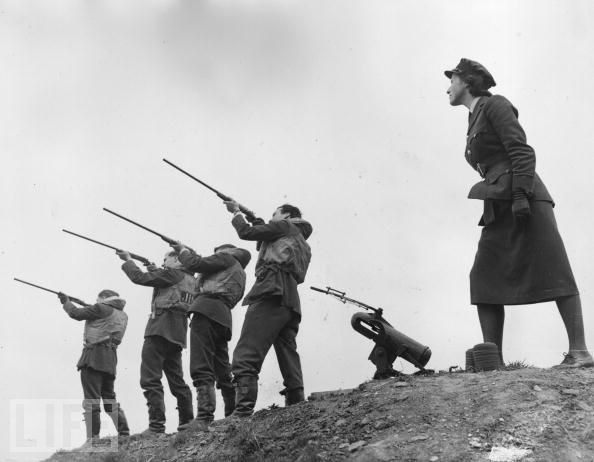 Pilots of a Spitfire fighter squadron, wearing their life-vests to be ready to take off at any time, take part in a clay pigeon shoot. An officer of the Women's Auxiliary Air Force assists them by operating the clay pigeon trap. 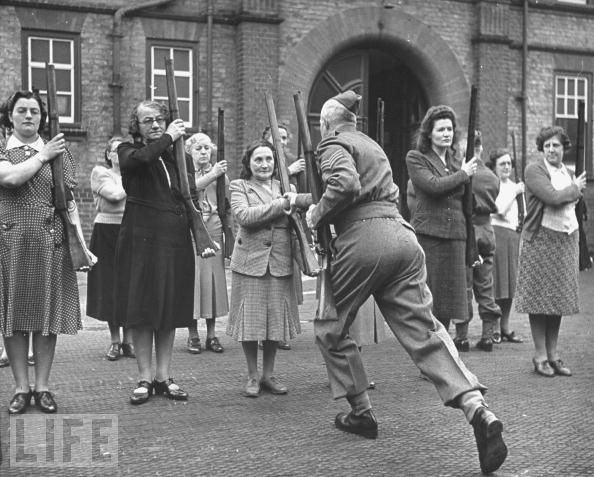 A sergeant drills civilian women, members of the Women's Home Defence Corps, in the use of rifles. 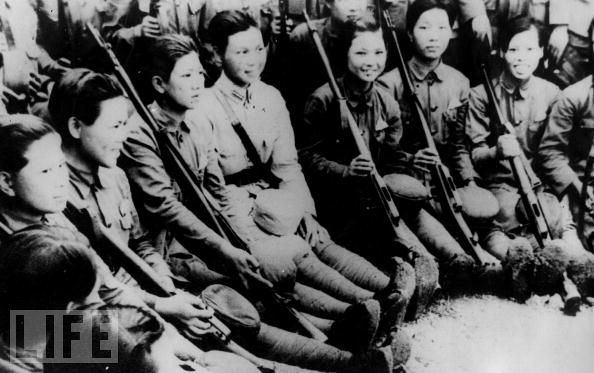 These women, shown at a their barracks, are among the 20,000 who received riflery training in China's army so far during World War II. 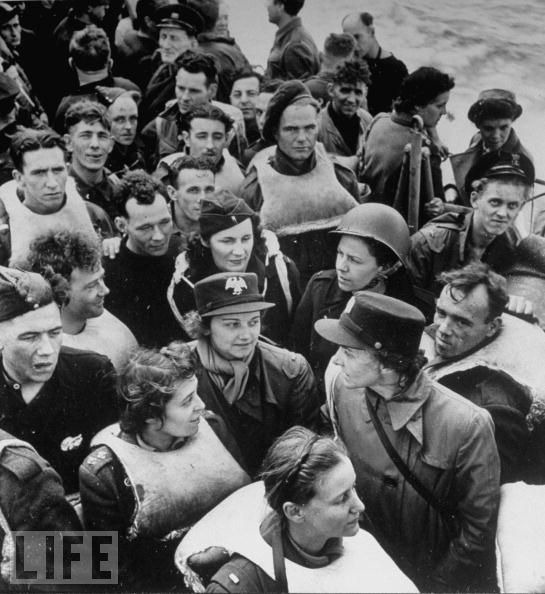 WAC officers and other survivors on board a rescue destroyer after their transport ship was torpedoed in the ocean near North Africa. 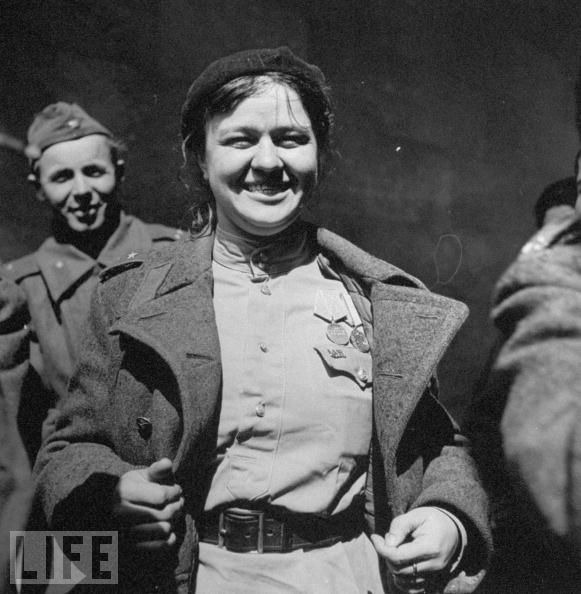 A female Russian soldier grins broadly while showing off her medals and a US Army Officer's insignia pinned to her shirt after the Allied troops met following the fall of Berlin. 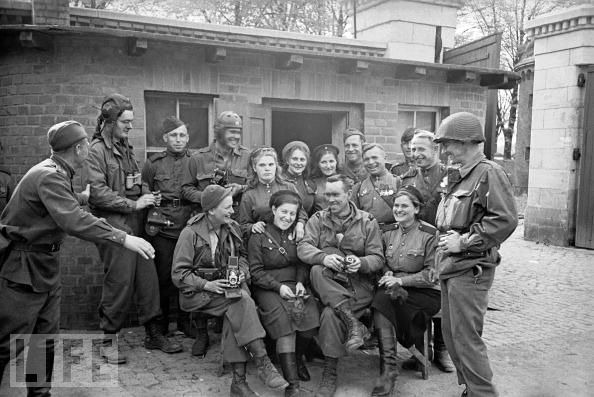 American soldiers and war correspondents join male and female Red Army soldiers in Torgau, Germany, on April 27, 1945, toward the end of the European war. 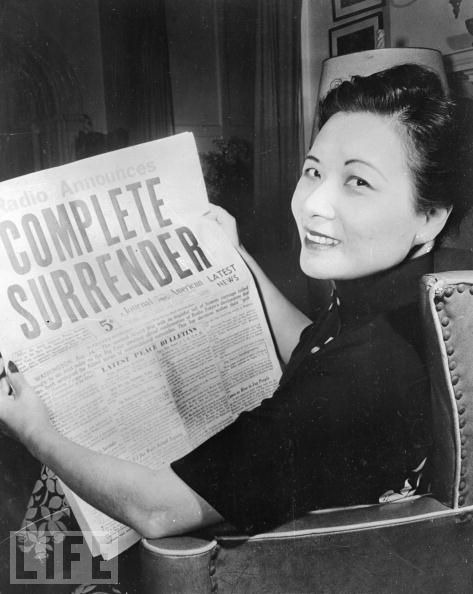 Soong Mei-Ling, the U.S.-educated wife of Chinese leader Chiang Kai-Shek, reads of Japan's surrender to the Allies in August 1945.