Before the Niagara river plunges along the Canada–United States border to create the mesmerizing Niagara Falls, it cuts a 11 km long gorge through the hard dolomite rocks of the Niagara Escarpment. This gorge has been a popular scene for sightseers ever since Niagara welcomed its first tourists more than a hundred years ago. Back then, the gorge was home to another attraction—a narrow-gauge railroad running along the shoreline at the bottom of the gorge.
The Niagara Gorge Railroad was the dream of Civil War veteran Captain John M. Brinker, who was one of Buffalo's foremost citizens. It was Captain Brinker’s idea to build an electric rail road through the Niagara Gorge. His proposal was at first met with incredulity, but his earnestness compelled attention. It was, however, not an original idea. Prior to Captain Brinker, the Niagara Falls and Whirlpool Company made a half hearted attempt to construct a railroad within the Niagara gorge, but legal obstacles prevented the company from executing the plan. Some sources say that the Niagara Falls and Whirlpool Company went bankrupt soon after. 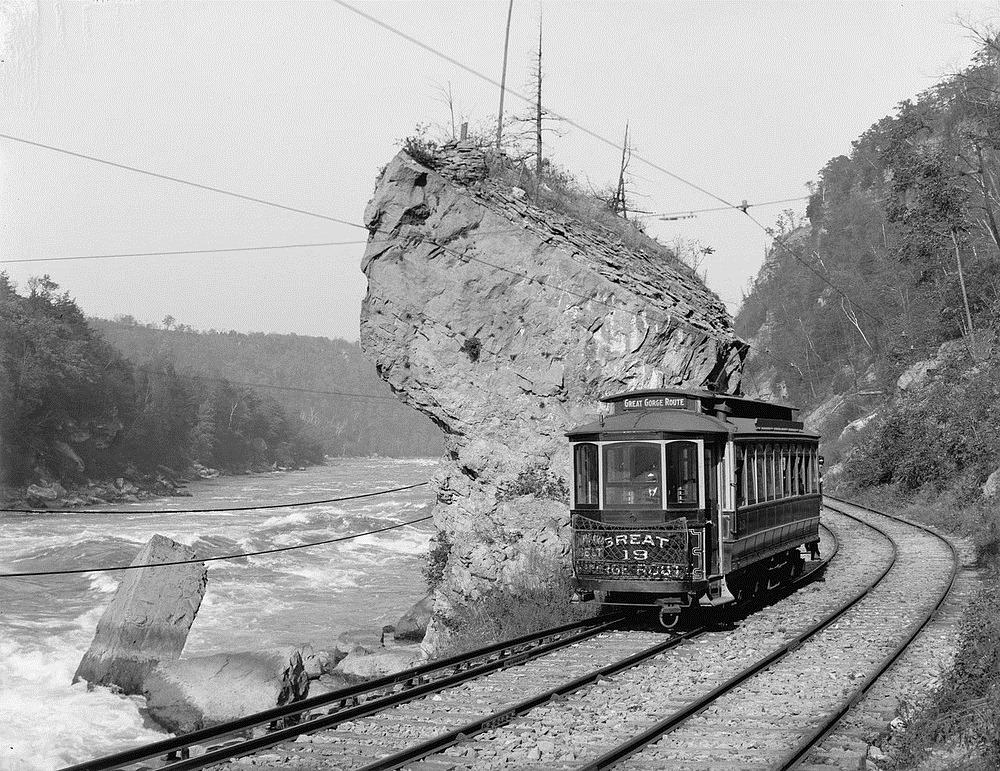 Trolley car of the Niagara Gorge Railroad. Photo credit: Library of Congress
Learning from the mistakes made by the previous company, Captain Brinker devised a new plan to connect the city of Niagara Falls to the city of Lewiston, both in New York, through the gorge. Brinker hoped riding along the gorge on an electric train would be a novelty that would draw large crowds. So the Niagara Falls and Lewiston Railroad Company was founded, which was later renamed to the Niagara Gorge Railway Company, and work commenced on the line in early 1895. It was a tremendous feat to build the gorge railroad. A gradual descent from the city of Niagara Falls into the gorge had to be excavated through the rock, and rock excavation was necessary at many points along the route in order to lay the tracks at or near the foot of the cliffs along the river. The line proceeded along past the Whirlpool and Devil's Hole to Lewiston, where it again returned to the top of the gorge. When the railroad opened later that year, it became an instant marvel of engineering technology, and an attraction rivaling that of the Falls itself.
The Niagara Falls and Lewiston Railroad provided the public with a remarkable view of the mighty Niagara River including the colossal waves of the raging Whirlpool Rapids, and the majestic Niagara Falls. In summer, open sided trolley cars were used with seats running completely across the width of the trolley. The railroad became so popular that a second track was laid the very next year. This allowed the railroad company to operate cars in both directions at the same time with greater frequency. 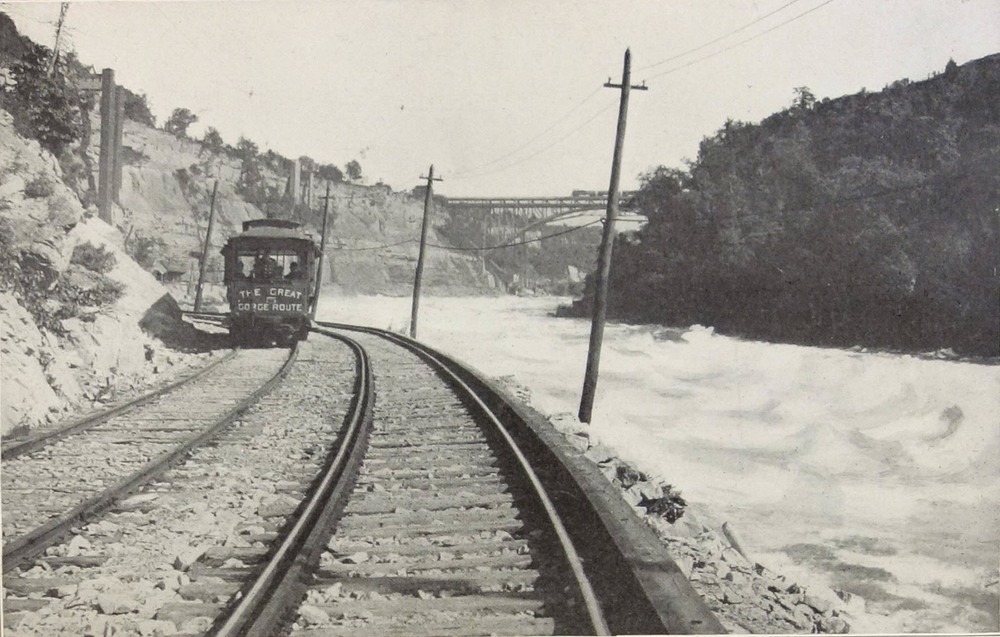 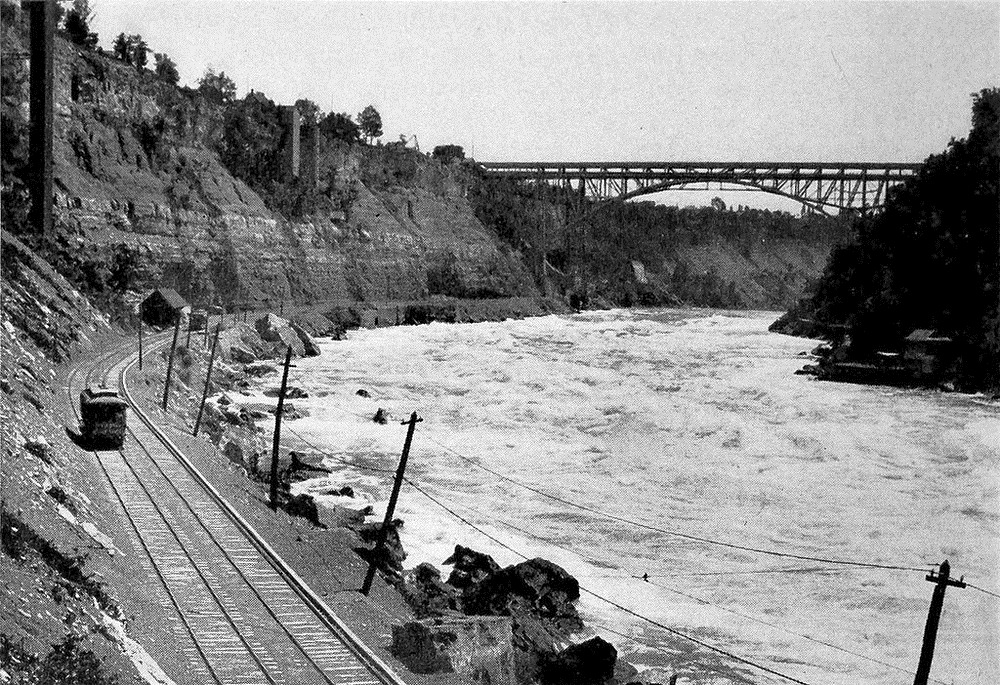 A similar double track line, connecting Chippawa to Queenston, was built on the Canadian side of the border on the top of the gorge. This line opened in 1893, two years before the American gorge railroad opened. Both of these lines—the Queenston-Chippawa railroad and the Niagara Gorge railroad—continued to be popular attractions until 1902, when the two trolley lines were purchased by the International Railway Company and combined into the "Great Gorge Route." Fiver years later, the Great Gorge Route was running trolley cars through the gorge in fifteen minute interval, from seven in the morning to midnight, seven days a week.
The Great Gorge Route closed seasonally between March and April because of spring thaw, which was when most rock falls occurred. Erosion of walls of the Niagara Gorge and rock falls became the biggest enemy of the railroad. Numerous mishaps happened during the railroad’s forty-year lifespan, and they were not without casualties. In 1907, an avalanche of ice just north of the Whirlpool Bridge killed a conductor and eight passengers. In 1915, a trolley carrying a Sunday School group from Toronto left the rails, killing thirteen people. In 1917, a trolley derailed and plunged into the Niagara River killing twelve. In 1930, a small rock slide crashed down on the rail bed carrying it and a number of power poles into the river. These regular disruption from rock and landslides began to eat into the profits, and in 1932, the Canadian portion of the Great Gorge Route was terminated. The American side continued until 1935, when five thousand tons of rock fell and buried more than 200 feet of track and rail bed, forcing the Great Gorge Route to close for business.
Today, the nature trail along the former rail bed at the base of the Niagara Gorge along the American shoreline are all that remains of the Great Gorge Route. 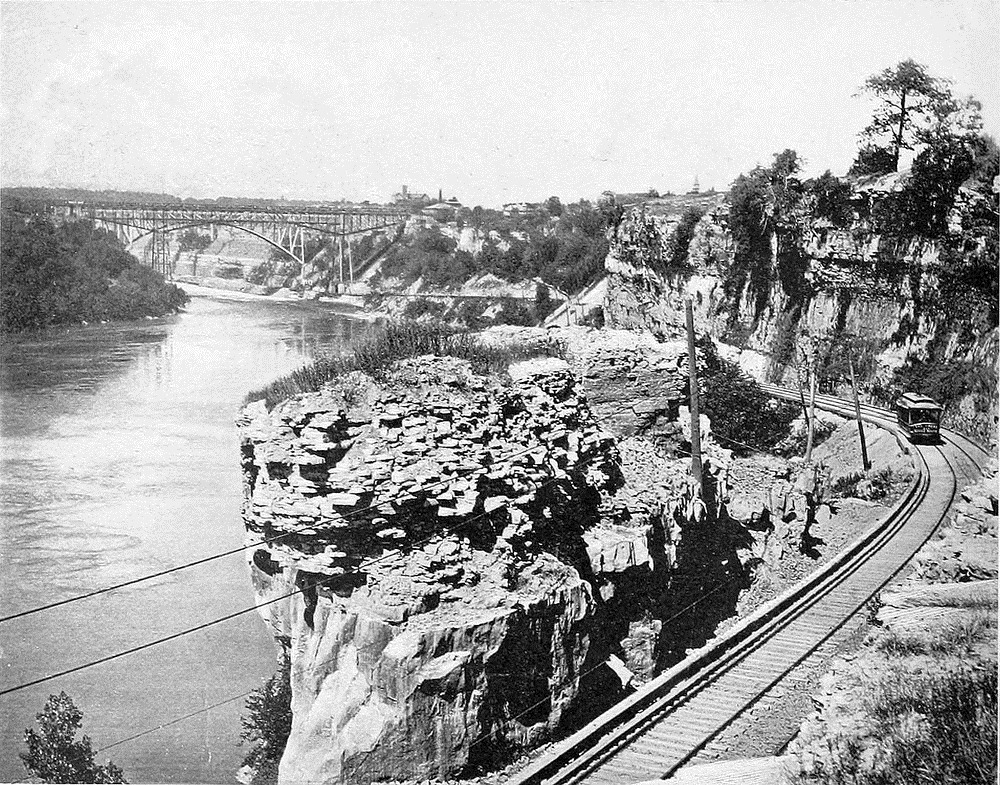 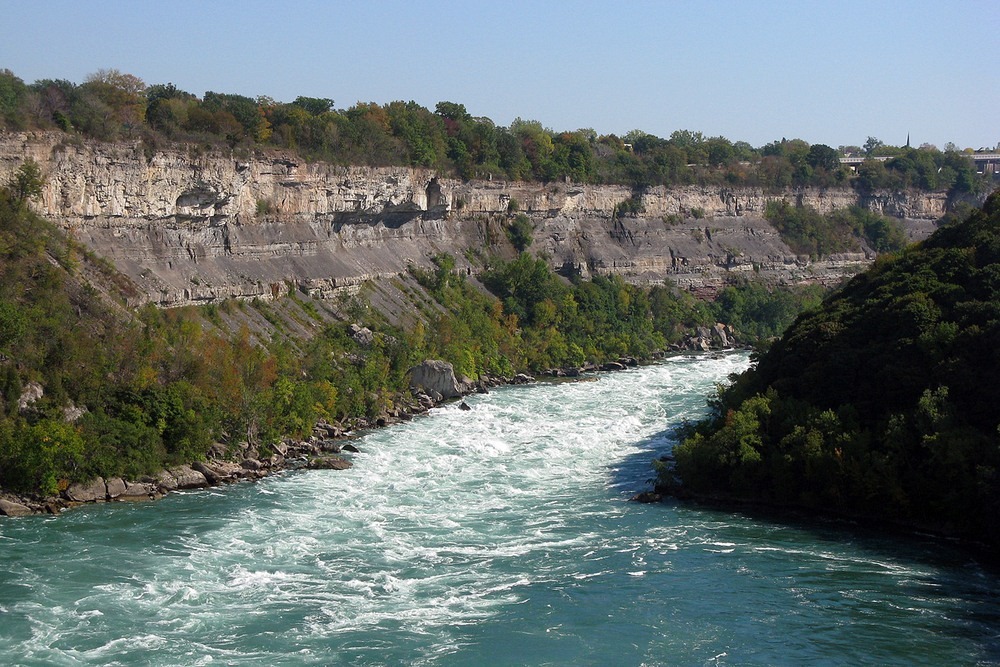 Niagara River Rapids before the Whirlpool, viewed from the Spanish AeroCar, in Niagara Falls, Ontario, Canada.