The House Built From Tombstones

This humble two-storied marble-clad house in Petersburg, in the US state of Virginia, has more than 150 years of Civil War history embedded in its walls. Yet, it was built only in 1934.
That year, resident Oswald Young struck a deal with the Poplar Grove National Cemetery near Petersburg. The cemetery was trying to save money on maintenance, and the park superintendent of the National Park Service, who manages Poplar Grove, decided that if they uprooted the tombstones from the graves and laid them flat on the ground instead, they would have less grass to cut and more money saved. 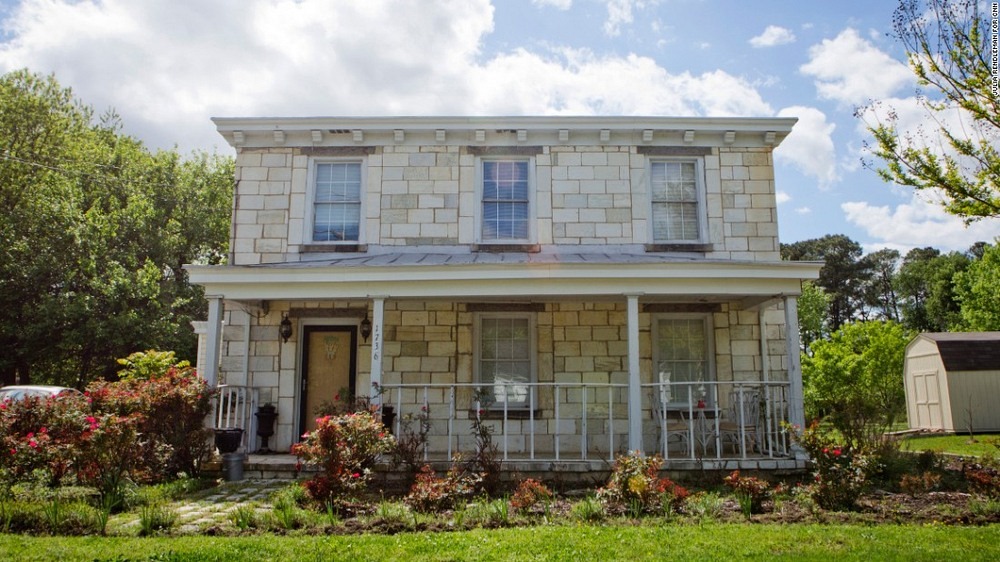 The Tombstone House. Photo credit: CNN
Consequently, over 2,000 headstones were removed, cut into appropriate size and converted into flat ones. At the end of this exercise, the cemetery had thousands of pieces of cut marble slabs that needed to be disposed off quickly. The opportunistic Oswald Young snagged hundreds of good pieces for the princely sum of $45. These pieces were used to decorate the exterior of his house, pave the walkway and even construct the fireplace mantle of what has come to be known as the Tombstone House.
The violated graves belonged to no ordinary people—they were graves of Union soldiers killed during the Siege of Petersburg in 1864-65. The dead were originally buried hastily near the battlefield, some in single shallow pits, others in mass graves. Only a few were given proper burials and their graves marked with a wooden headboard.
In 1866, Lt. Colonel James Moore began scouting the Petersburg area for land for a National Cemetery. Eventually, a farm just south of the city was chosen. This tract of land had been the campground for the 50th New York Volunteer Engineers. During the war there was a Gothic Revival pine-log church there called Poplar Grove, and that’s how the cemetery got its name.
After the establishment of the cemetery, work began on the transfer of bodies. Thousands of bodies were dug up from nearly 100 separate burial sites around Petersburg and reburied at Poplar Grove. About a hundred men volunteered for the search and recovery mission, meticulously searching every square inch of the battleground for unmarked graves. Known as the “burial corps”, these men worked for three years until 1869. By then, they interred approximately 6,700 remains, of which only 2,139 bodies were positively identified.
In the decades following the conversion of the cemetery’s tombstones, the Poplar Grove Cemetery slowly slipped into neglect. Mowing the grass and the annual placement of flags were the only maintenance work performed. Poor drainage caused to cemetery to flood after heavy rains, and the water began to eat away the headstones laying flat on the ground. The cemetery's wall crumbled and its flagpole collected rust.
Families and descendants of those buried complained for years for the dishonor shown towards the fallen war veterans. Eventually, the government earmarked a budget of several million dollars for rehabilitation of the cemetery. Between 2015 and 2017, more than five thousand markers were replaced and improvements were made throughout the property. Graves of the known dead got new upright headstones, while graves of the unknown got square markers above ground, mirroring the cemetery's original configuration. The old gravestones were grounded up and disposed of in order to prevent another Oswald Young from using them in inappropriate ways. 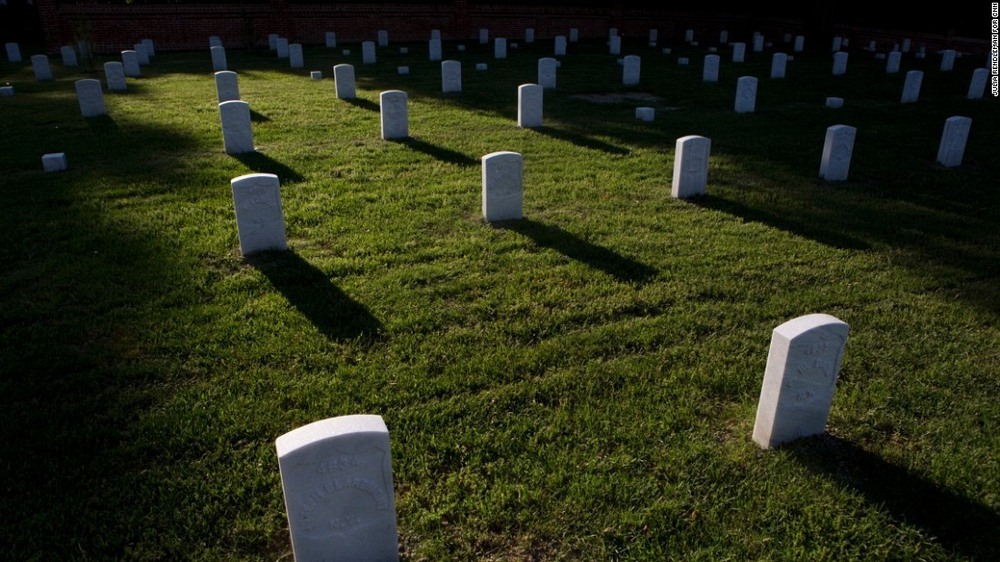 The Poplar Grove National Cemetery after the tombstones were uprighted. Photo credit: CNN 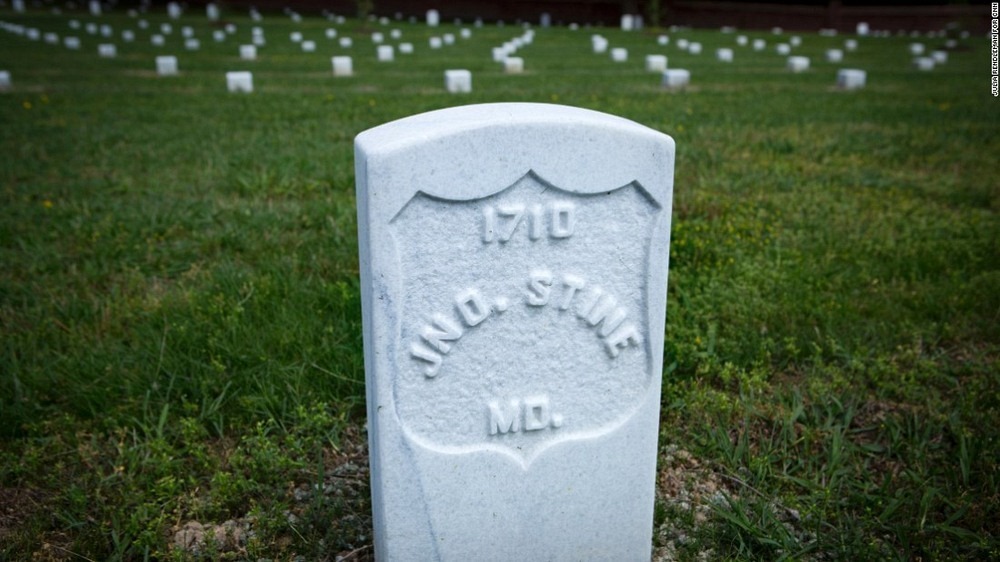 The new upright markers on the graves. The old markers were destroyed. Photo credit: CNN 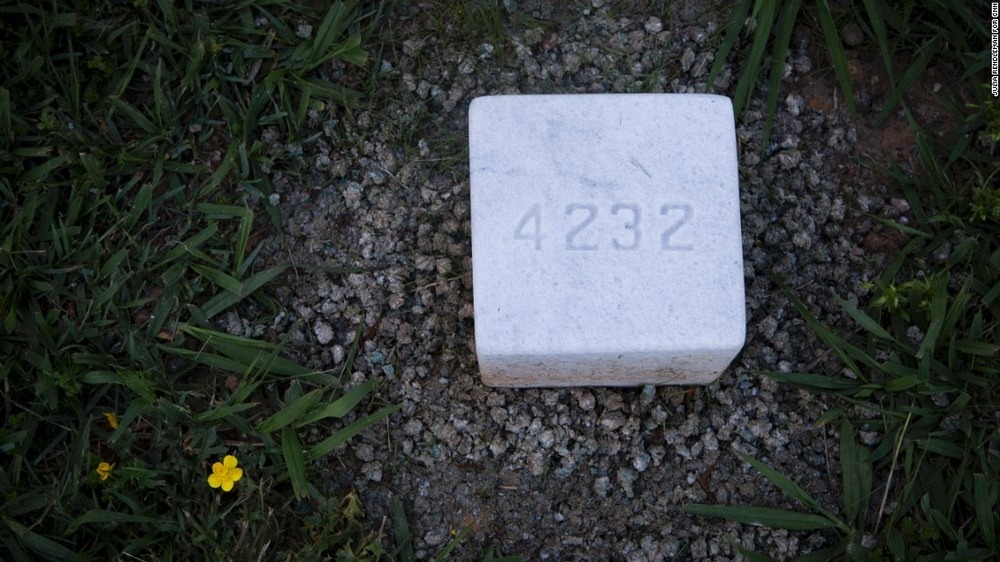 Markers for the unknown are six inches by six inches and rise a few inches above ground. Photo credit: CNN