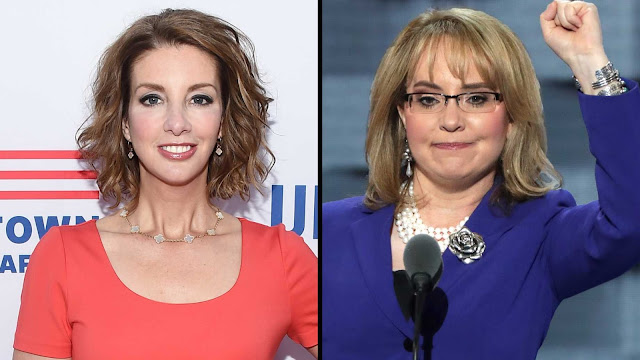 Democratic politicians and left-wing activists rushed to push for gun control in the moments following Sunday's tragic shooting in Jacksonville, Florida, where a gunman shot ten people, killing two.
The shooting happened at a video game tournament after one of the gamers reportedly lost and then returned with a firearm and started shooting at fellow gamers before committing suicide.
Predictably, pro-gun control politicians and activists instantly politicized the shooting before any details were confirmed by law enforcement officials because it is often in that window of time — when the facts are unknown — that gun control advocates are able to advance their agenda the furthest.
The shooter was a 24-year-old male from Maryland who legally purchased two handguns from an FFL dealer in Baltimore, according to the Jacksonville Sheriff's Office.
The shooter had also been hospitalized twice as a teenager in psychiatric facilities for mental health issues, according to the Associated Press — which also noted that he "was prescribed anti-psychotic and anti-depressant medications."
It is currently unknown how the shooter was able to purchase the two firearms if he had been hospitalized multiple times for psychiatric issues. It is worth noting that if he voluntarily sought and entered treatment at a hospital for psychiatric issues, he most likely would not have been prohibited from purchasing firearms.
The shooting also happened in a gun-free zone — which is where 98 percent of mass shootings occur.
Democratic politicians and left-wing activists immediately seized the opportunity to politicize the tragedy before the facts came out.
Transgender activist Charlotte Clymer tweeted a list of gun laws from the state of Florida which ended up being completely irrelevant as the shooter bought the firearms in Maryland: 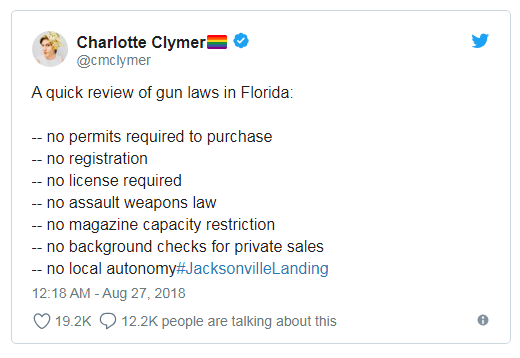 Maryland has strict gun laws and the process for buying a handgun is complicated. A buyer must be fingerprinted with the Maryland State Police (MSP), must submit an application to MSP to receive a Handgun Qualification License (HQL card), must take a firearms safety course, must verify their HQL card to an FFL dealer, submit an ATF background check, and wait seven days before they're able to purchase a single handgun.
A recent study from the CATO Institute ranked Maryland as the 46th worst state for gun rights — with only Massachusetts, New Jersey, California, and Hawaii ranking as more hostile states for gun owners.
Democratic politicians like House Minority Leader Nancy Pelosi, New York Governor Andrew Cuomo, and Illinois Senator Dick Durbin rushed to put out statements calling for Congress to act and blaming the NRA for shootings in America — yet none of them even offered a potential solution. 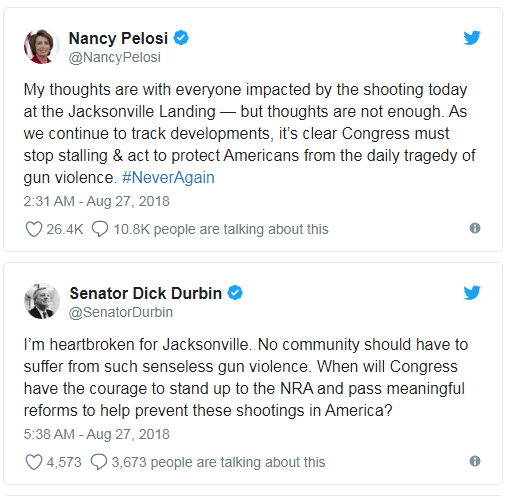 The shooting received significant national coverage until the Jacksonville Sheriff's Office confirmed that the shooter used a handgun.
Within a matter of hours, the story was already fading from the news cycle — barely receiving more attention than the 28 people who were shot in Chicago over the weekend.
Others, like left-wing "award-winning freelance journalist" Felicity Hannah argued that a man killing people and committing suicide after losing a video game had nothing to do with "mental health." 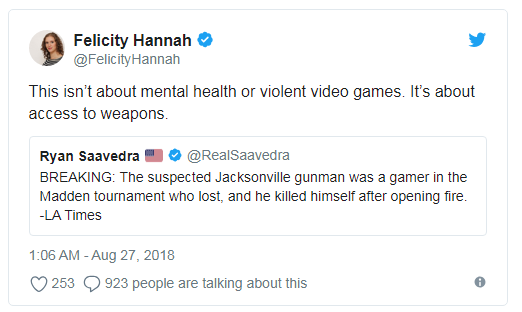 Then there are the anti-gun propagandists like Shannon Watts — who constantly distorts statistics, lies about people involved in gun rights, and blocks people on social media the moment they debunk one her claims. 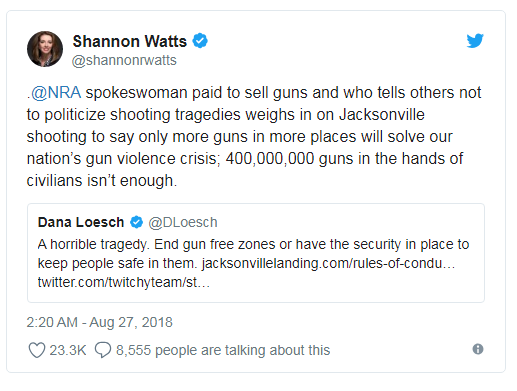 Here is the relationship between firearm ownership and the gun homicide rate in the United States: 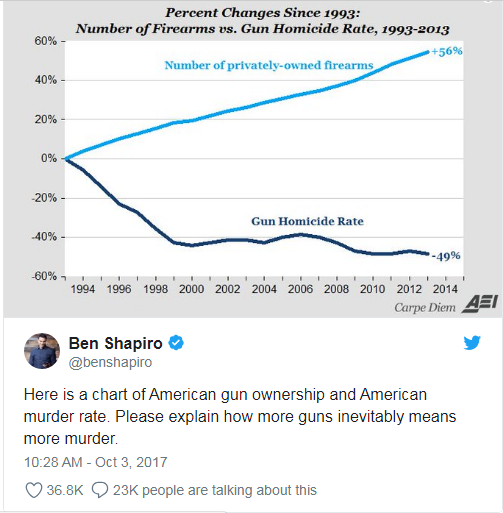