In the early 1960s, the two nuclear superpowers of the world—the United States of America and the Soviet Union—began looking for ways to utilize the tremendous energy released by nuclear bombs for productive purposes. Things that were discussed included blasting a new canal through the Isthmus of Panama, creating an artificial harbor in Alaska, excavating mountains, and other such projects that involved moving large quantities of earth and rocks. Under Operation Plowshare, the US carried out a few tests in the Nevada desert, the effect of which can still be seen in the crater-riddled desert floor. The largest of these craters, from the Sedan nuclear test in 1962, is now a tourist attraction. 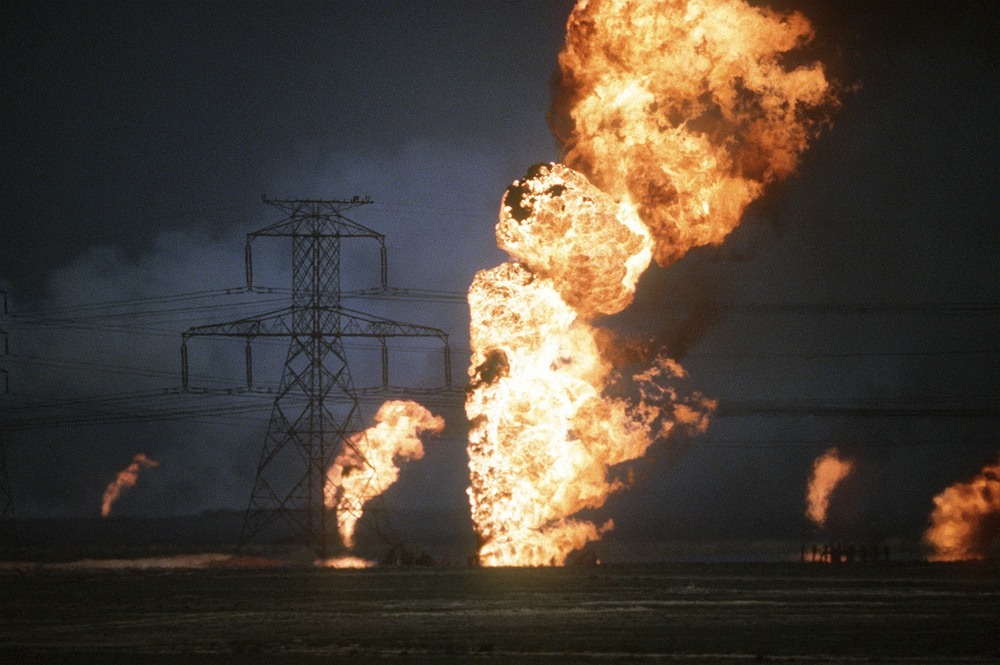 Oil well fires blaze out of control outside Kuwait City during Operation Desert Storm. Photo credit: David Mcleod
The Soviet Union carried out more extensive tests under the “Nuclear Explosions for the National Economy” program. Using small nuclear explosions they probed the ground for oil deposits, created vast underground caverns for storing natural gas, crushed ore in open-pit mines, dug channels, and built dams. Once while exploring for oil, radioactive gases contaminated a significant portion of a densely populated region near river Volga. Another time, they blew up a river to see if they can create a reservoir. They got a reservoir all right, but it’s radioactive to this day.
It was around this time an opportunity presented itself.
In 1963, a gas well in the Urtabulak gas field in Southern Uzbekistan, about 80 km southeast of Bukhara, suffered a blowout at a depth of 2.4 km. Over the next three years the well burned steadily causing losses of more than 12 million cubic meters of gas per day—enough to supply the needs of a city the size of St. Petersburg.
When all conventional methods of controlling the fire failed, the Soviet government turned to their nuclear scientists for help. The geologists and physicists of the nuclear program calculated that if a nuclear bomb was detonated close to the blowout, the pressure generated by the explosion cloud squeeze shut any hole within 25 to 50 meters of the explosion. The yield necessary was calculated to 30 kiloton, or about twice the power of the bomb that leveled Hiroshima. 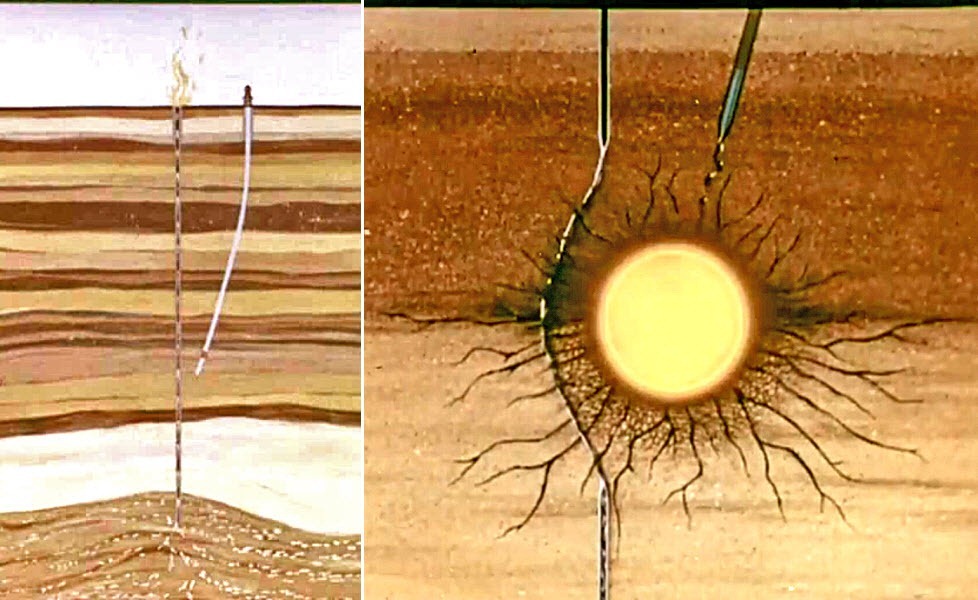 In the fall of 1966, two slant wells, slightly wider than a feet, were drilled simultaneously as close as possible to the oil well that was burning uncontrollably. At a depth of 1,400 meters, at an estimated distance of 35 meters from the leaking oil well, a nuclear bomb was lowered into one of the holes. The hole was then filled with cement to contain the explosion and prevent it from erupting to the surface. The bomb was then detonated.
The Soviet newspaper Pravda Vostoka of Tashkent published an account of the experiment at the time.
“On that cold autumn day in 1966, an underground tremor of unprecedented force shook the [ground] with a sparse grass cover on white sand. A dusty haze rose over the desert. The orange colored torch of the blazing well diminished, first slowly, then more rapidly, until it flickered and finally died out. For the first time in 1,064 days, quiet descended on the area. The jet like roar of the gas well had been silenced.”
It took only 23 seconds for the flames to go out. Historic footage of this incredible operation shows the moment the nuclear bomb was detonated and the subsequent dying of the fire.
This was the first time in history when a nuclear bomb was successfully used to extinguish oil fires, and it wasn’t going to be the last.
Months later another fire broke out at the nearby Pamuk gas field, and the fire spread to the surface via additional holes. This time a 47 kiloton nuclear weapon was lowered to a depth of 2,440 meters and detonated. Because the leakage was large, the flow continued for seven days before it finally died out.
The second success gave Soviet scientists great confidence in their new technique of controlling runaway gas and oil wells. In the following years, several more opportunities arose for the use of nuclear explosions to extinguish runaway gas well fires. In May 1972, a 14 kiloton explosion at a death of 1,700 meters sealed a two-year-old gas leak in the Mayskii gas field about 30 km southeast of the city of Mary in Central Asia. Then again in July the same year, another runaway gas well in Ukraine was sealed with a 3.8 kiloton nuclear explosion at a depth of more than 2.4 km. The last attempt occurred in 1981 on a runaway well in the Kumzhinskiy gas deposit in the northern coast of European Russia. A 37.6 kiloton nuclear explosion was detonated at a depth of 1,511 meters, but this time the well was not sealed because the position of the leak was not precisely known.


The experiments came to an end in 1989 when the Soviets suspended any kind of nuclear weapons testing.