NBC Tries, Fails To Defend Itself After Sitting On Information That Undermined Kavanaugh Accusers (6 Pics) 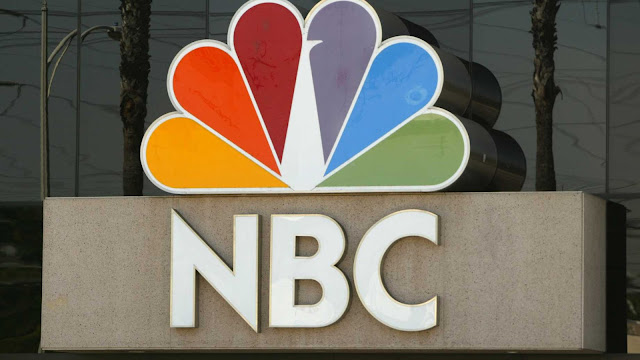 An NBC reporter who interviewed one of Supreme Court Justice Brett Kavanaugh’s accusers, and who admitted to sitting on evidence that two of his accusers were not credible, is now trying to defend herself and her network.
It’s not working.
Kate Snow interviewed Julie Swetnick on Oct. 1. Swetnick claimed in a sworn statement to her attorney, Michael Avenatti, that she saw Kavanaugh act aggressively toward women, spike punch with drugs to get women drunk, and line up outside of rooms to gang-rape women. On NBC, Swetnick walked back her most important claims: She didn’t see Kavanaugh spike any punch and she never saw men lined up to gang-rape women (they were just “huddled by doors).”
Kavanaugh said he doesn’t even know Swetnick. One of the people Swetnick named to corroborate her story also didn’t remember anyone with that name.
Snow opened her interview by acknowledging the network couldn’t verify any of Swetnick’s claims. Yet the network still chose to give her a 13-minute primetime interview.
Last Thursday, NBC acknowledged that a second accuser represented by attorney Avenatti, whose name is still unknown, said her words were “twisted” in her sworn statement and that she never saw Kavanaugh spike punch or act inappropriately toward women. NBC had this information days before Kavanaugh’s confirmation vote, but didn’t report it until now.
On Saturday, Snow took to Twitter to defend herself and her network for sitting on information that could have helped Kavanaugh gain some of his reputation back after the salacious allegations.
“Important context to my and @annaschecter’s story regarding a second woman Michael Avenatti put forward to corroborate Julie Swetnick’s claims about Brett Kavanaugh,” Snow began her eight-tweet thread. 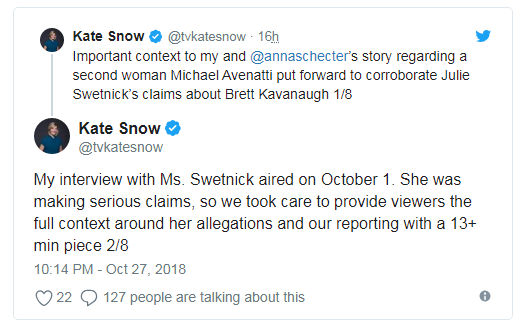 So, because she made “serious claims,” she was given a primetime interview, even though her claims couldn’t be verified.
“We also made clear – in the interest of full transparency – that NBC News had not been able to independently verify her claims,” Snow continued, as if that makes it okay to give uncorroborated, horrific allegations air time when a man’s reputation is at stake. 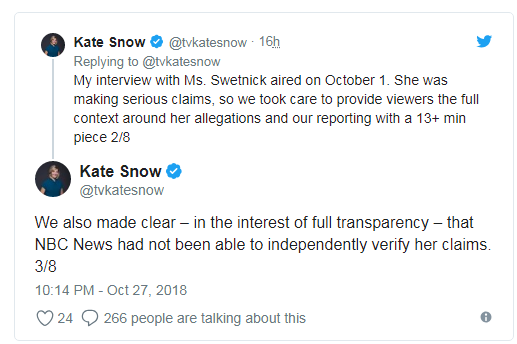 Snow then explained the story NBC wrote on Thursday. 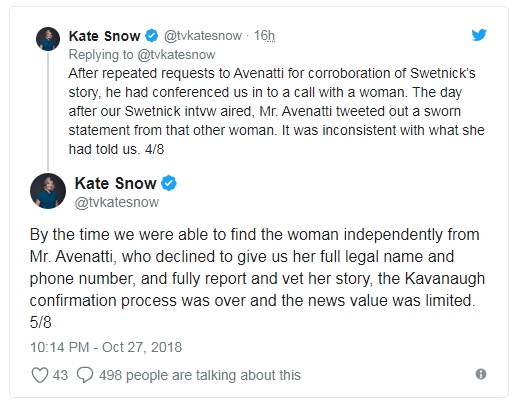 This isn’t true. NBC knew at the time Avenatti released the second woman’s statement that she wasn’t credible, on Oct. 3. Kavanaugh was confirmed on Oct. 6. NBC — according to Snow’s own reporting — contacted this woman on Oct. 3 after Avenatti released her statement. The woman said she only “skimmed” the declaration. On Oct. 4, she texted NBC to say she didn’t see what she was alleged to have seen in the affidavit.
Snow also reported that Avenatti confirmed the woman they talked to and his second client were one and the same, and had some more back and forth messages with her and Avenatti, ,separately. The last text from this woman — again, according to NBC’s own reporting — came on Oct. 5, the day before Kavanaugh was confirmed.
Even if it were true that NBC couldn’t “fully report and vet her story” before the Kavanaugh confirmation, the “news value” would not be “limited.” The man is sitting on the Supreme Court and a large chunk of the American people think he is a gang-rapist. Providing evidence that he is not would certainly be newsworthy, go a long way to repairing Americans’ trust in the media, and repair Kavanaugh’s reputation.
Further, Snow admits her and her network’s left-wing bias by claiming they couldn’t post the story on Avenatti’s second client because they couldn’t “fully report and vet her story,” when they put Swetnick on air with a disclaimer they couldn’t verify herstory. The woman accusing Kavanaugh of gang-rape was given an interview without verification, the story about how Avenatti’s clients disagreed with their sworn statements was not posted without verification. 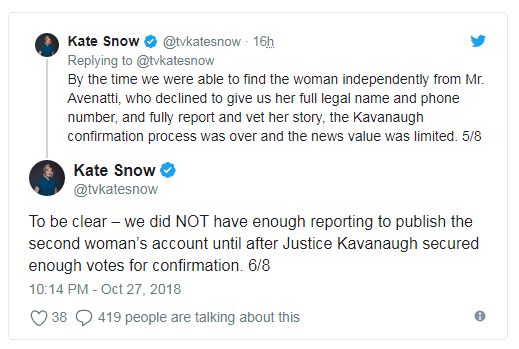 But they did have enough reporting to present suspicions about her account before the Kavanaugh hearing. And, as I mentioned before, they went forward with outlandish, salacious accusations against Kavanaugh without vetting those. 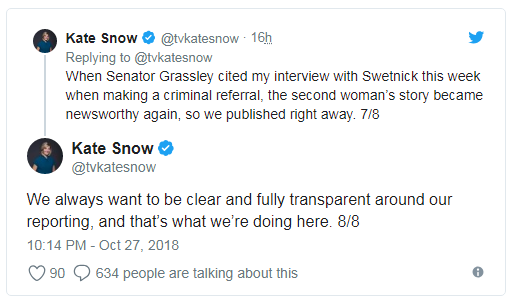 Senate Judiciary Chairman Chuck Grassley (R-IA) did not make the story newsworthy again. It was always newsworthy. NBC proved that it only cared about sexual assault accusations against Kavanaugh to stop his confirmation. Once he was confirmed, NBC didn’t care whether the accusations were true or not, because he was already on the court.
Snow’s attempt to defend herself and her network just dug them a deeper hole.