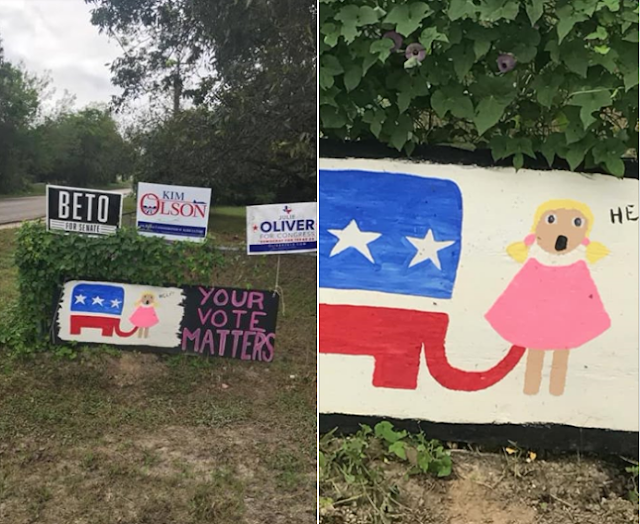 A political sign in a small Texas town caused a big flap this week.
It started when Marion Stanford of Hamilton, Texas, displayed a sign with an image of the GOP elephant logo sticking its trunk under the dress of a female figure. Next to the cartoon figure were the words “Help” and “Your vote matters.” In the background of her display were campaign signs supporting Democratic candidates Lupe Valdez, Beto O’Rourke, Julie Oliver and Miller’s challenger, Kim Olson.

What began as a controversial political statement escalated to Texas Agriculture Commissioner Sid Miller blasting Stanford on Facebook. Police also reportedly arrived at Stanford’s home to confiscate her sign, according to published reports.
Stanford defended the sign by saying she made it after watching testimony from Supreme Court nominee Brett Kavanaugh regarding sexual assault allegations against him.
Facebook users accused Stanford of using a likeness of Kavanaugh’s daughter for the sign.
“That was not Judge Kavanaugh’s daughter,” Stanford told the Dallas Morning News. “The cartoon was made last year by Washington Post cartoonist Ann Telnaes, a Pulitzer Prize winner.”
Stanford told the news outlet she received angry phone calls and harassing messages on Facebook. On Tuesday night, police came to her home after they received complaints.
“Police told me to remove the sign or they would take it and would arrest me,” Stanford said. “So I let them take the sign.”
Miller wrote on Facebook: “This is in Hamilton, Texas and is supposed to be Judge Kavanaugh’s young daughter. Notice my opponent’s sign in the background. The Democrat sleaze knows NO bounds!”
Some Facebook users went as far as staying Stanford’s post amounted to pedophilia and she should be arrested.
The city manager of Hamilton, located about 100 miles southwest of Fort Worth, gave a different account of what happened.
“It’s political season, and a citizen here placed a yard sign that featured a political animal taking an inappropriate position with a young child,” Pete Kampfer, city manager of Hamilton, told the Dallas Morning News. “A police member visited the owner’s home, and the owner asked the officer to take the sign.”

What about free speech?

Kampfer said the city strongly supports the Constitution and free speech.
Meanwhile, the sign is still at the police station.
Southern Methodist University law professor and First Amendment expert Dale Carpenter told the news outlet the sign is protected under the First Amendment.
“There is no basis I can see for removing the sign,” Carpenter said. “It’s not obscene, and no court would find it to be. You can say it’s offensive or distasteful, but that’s protected under the Constitution.”