Thirty-six Indian schoolgirls have been treated in hospital after they were attacked by a large crowd of teenage boys and their parents when they complained of sexual harassment. 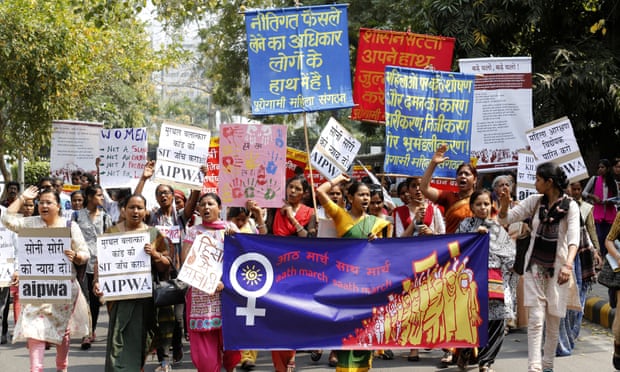 Thirty-six Indian schoolgirls have been treated in hospital after they were attacked by a large crowd of teenage boys and their parents when they complained of sexual harassment.
Six boys and one woman were arrested in the north-eastern state of Bihar after the attack at a girls’ boarding school.
Police and witnesses said girls from the government school in Triveniganj – about 160 miles (260 km) east of the state capital, Patna – had been playing in a sports area on Saturday night when a group of teenage boys began making lewd comments.
The girls argued back and some physically remonstrated with the teenage boys, who initially backed off. Police say a group of the boys and some of their parents returned about 20 minutes later carrying bamboo sticks and iron rods.
“They dragged us by our ponytails, assaulted [us] with bamboo sticks and kicked and punched,” said Gudia, one of 36 girls who were treated in hospital after the attack.
“We were totally unarmed and had nothing to protect us. I saw many of my friends lying on the ground and crying with pain.”
The girls admitted to hospital were aged between 10 and 14.
Gudia said the young men were angry “because we had protested [against] their sexual advances”.
“They had been always teasing us and scribbling dirty words on the walls of our school,” she said, adding that she and other girls had tried to report the harassment to local government officials but were not taken seriously.
Police have arrested nine suspects. “Of the first seven arrested, six are boys and one [is a] woman,” Mritunjay Chaudhary, a district superintendent, said.
Most of the injured children were discharged from hospital and returned to the school accommodation. A local official said many of the girls were shaken and feared further violence.
“Apparently, they are suffering from psychological fear, but we are arranging shows of good entertaining movies on the campus to calm down their tension and dispel any such fear from their minds,” said district magistrate Baidyanath Yadav on Monday.
“We are also counselling them so that they could get better soon.”
Yadav said police were being deployed and that a higher fence would be put up around the school to prevent outsiders from entering the campus.
Sexual violence has become a major political issue in Bihar, one of India’s poorest states, after an audit of 110 women’s care homes found varying reports of abuse.
The worst was at a home in Muzaffarpur district where auditors found “grave instances of violence”, including at least 30 girls who claimed to have been raped.
Women’s groups have led several protests against the findings, which have led to the suspension of more than 20 government officials and at least 14 arrests.
A woman in the state was also allegedly raped last week as she bathed in the Ganges, India’s holiest river.
The country has been reckoning with sexual assault since a 2012 gang-rape and murder that galvanised women’s movements and led to an overhaul of rape laws. Activists say attitudes are slowly changing, particularly in large cities, but that conditions are generally worse for women in remote and rural areas.