Trump tweeted he has no ties to Saudi Arabia. A Fox News account proved him wrong. 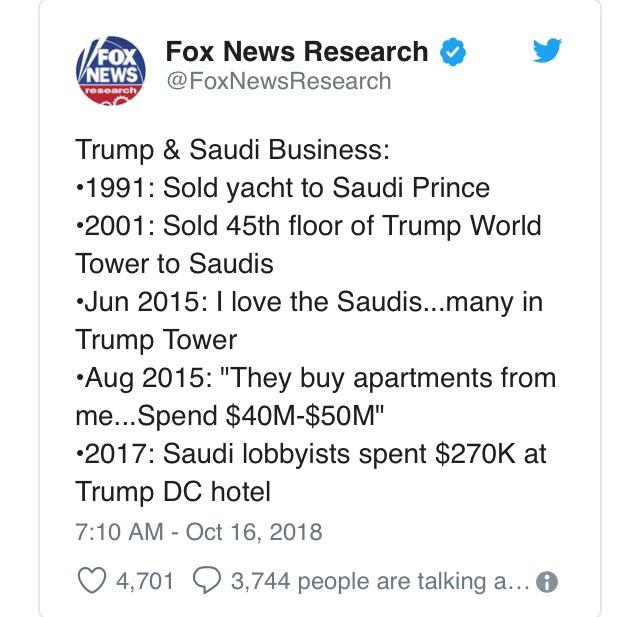 Amid the mystery of Jamal Khashoggi’s disappearance and possible murder in a Saudi consulate, President Donald Trump has cast plenty of doubt on whether Saudi Arabia was responsible — speculating that “rogue killers” may have killed the journalist and that Saudi leaders are not to blame.
He even went as far as to tweet early Monday morning that his views are not influenced by personal conflicts of interest.
“For the record, I have no financial interests in Saudi Arabia (or Russia, for that matter),” Trump said. “Any suggestion that I have is just more FAKE NEWS (of which there is plenty)!”
This is not true — as a Fox News-affiliated Twitter account quickly pointed out.
Fox News Research, a research group for the Fox News media company, published a rebuttal tweet less than an hour after the president’s remarks, delineating a history of Trump’s transactions with the Saudis that date to the early 1990s.
The timeline begins with a personal deal between Trump and Saudi Prince Alwaleed Bin Talal Bin Abdulaziz al Saud, when the president sold the latter his 281-foot yacht in 1991. The boat, nicknamed Trump Princess, was first handed over to creditors after the real estate mogul was found to be $900 million in debt.
The next item refers to a series of business transactions between Trump and Saudis — most notably a 2001 sale of the 45th floor of the Trump World Tower in New York City for $4.5 million.
“Saudi Arabia — and I get along great with all of them. They buy apartments from me,” Trump said in 2015. “They spend $40 million, $50 million. Am I supposed to dislike them? I like them very much.”
The relationship between the president and the Saudi government has been under intense scrutiny over the past two weeks due to the disappearance of Khashoggi, a Saudi dissident and Washington Post columnist, an event that has caused a global uproar and created a rift in the nation’s foreign ties.
In a 60 Minutes interview that aired Sunday, Trump said the US was looking at the case “very strongly” but did not have any leads on whether Saudi Arabia is behind his vanishing. The president told journalist Lesley Stahl, “We’re going to get to the bottom of it, and there will be severe punishment.”
Multiple news outlets have said Saudi officials are ready to release a report disclosing that Khashoggi was killed by accident when he visited the Saudi consulate in Istanbul on October 2. In the meantime, Turkish officials have reportedly told their American counterparts that they have audio and video recordings proving that the journalist was tortured and killed inside the building.
Khashoggi, a US resident living in Virginia on self-imposed exile, was last seen entering the consulate more than two weeks ago to file some paperwork for his upcoming marriage. His fiancée, who was waiting for him outside, told Turkish media and local authorities that she never saw him exit.
A group of bipartisan senators has urged Trump to place sanctions on Saudi Arabia as Secretary of State Mike Pompeo visits the nation’s de facto ruler, King Mohammed bin Salman. Yet Trump will not hold Saudi leaders responsible if it means “punishing” American companies and defense contractors.
“I’ll tell you what I don’t want to do,” Trump told Stahl in the 60 Minutes interview. “I don’t want to hurt jobs. I don’t want to lose an order like that. And you know what, there are other ways of punishing.”