WATCH: Conservative Responds To Viral Feminist Song With Her Own Take On Feminism 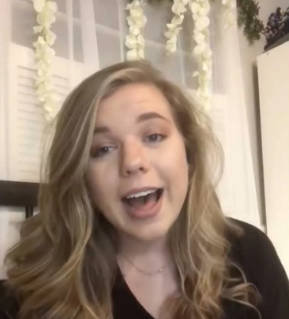 In response to a viral video by a leftist singing about what she believes is the struggle of women in America, a conservative blogger posted her own female "empowerment" song.
The viral feminist song by Lynzy Lab Stewart was inspired by President Trump saying it was a "scary time for young men in America," in reference to Justice Brett Kavanaugh’s mudslinging confirmation process. The theme of the song is that women's struggles are far more significant than the struggles of men who are falsely accused. Stewart declares that she can't "walk to her car late at night on the phone," open up her window when she’s home alone, or wear a miniskirt.
"It’s not such a scary time for boys," she concludes. "They’ve always had the upper hand, they’ve always had a choice. It’s time for women to rise up, use our collective voice. The day to vote is November 6th, so let’s go make some noise. Go vote."
The song quickly went viral, earning millions of views.
Bothered by what she described as the unsound reasoning of the viral song, conservative blogger Kylee Zempel wrote and performed her own version of the song.
"I don’t act out of ignorance and not out of fear," she begins. "You can blame the patriarchy, but I’ll have none of that here. Someday I plan to have a family and an awesome career. If I need some inspiration, I just look in the mirror."
Her version of the chorus focuses on her belief about what constitutes true female empowerment: "This is empowerment to me, conservative women might be in the minority. You can speak for yourself but you don’t speak for me. I’ve got a mind of my own, so just let me be."
Citing the Constitution as her "jam," Zempel blasts feminists' hysterical "Handmaid's Tale" and sexist "future is female" themes.
"This isn’t a scene out of the Handmaid’s Tale," she sings. "The future is human, it isn’t female. You don’t stand for all women, you just want the Left to prevail. We’re no longer silent, we’ll stand up for our males."
In response to false accusations, Zempel sings: "You somehow find a way to make everything about sex. Don’t mind false accusations, but you could be next. Got no problem with hook-up culture till you see the effects. When we turn to incivility, it really infects."
After wrapping up the tune, she adds, "See you at the polls."
In an interview with The Daily Wire, Zempel said she composed the song in response to the viral feminist video.
"It really bothered me that something that wasn’t so sound in its reasoning was getting so much attention," Zempel said. "I totally disagreed with many of the principles which she was promoting."
Zempel said the catchy tune stuck with her and inspired her own lyrics. "I wasn’t even trying but just came up with a little stanza and then before I knew it, I had two and then I kept plugging stuff in with the tune until I had something," she said. "It didn’t take long at all. I wanted to be an equal but opposite voice, so that’s how it was born."
Watch below: