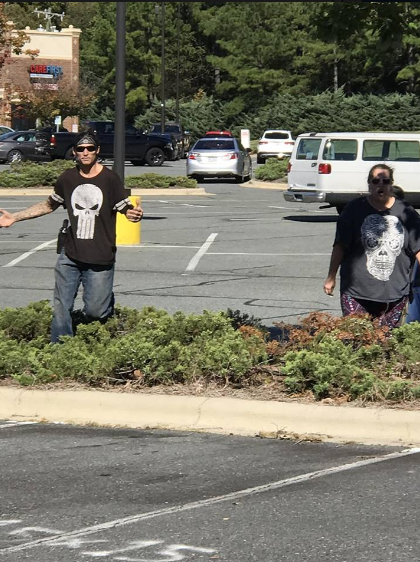 Early voting nearly turned violent in Charlotte on Wednesday, when a Republican volunteer was confronted by a man who showed a gun at a Mecklenburg County polling place, police said.
Derek Partee, who is black, said three white people angrily approached him at the Steele Creek polling place, which is southwest of Charlotte near Carowinds.
Partee posted photos of the three on Facebook, including a photo in which one heavily tattooed man can be seen openly carrying a pistol in a hip holster. Partee said he called the Charlotte-Mecklenburg Police Department and filed a report.
In a news release late Wednesday, CMPD said it had one person in custody who officers intended to charge in the case. The two others who were with the suspect will not be charged because police determined they violated no laws.
The suspect was carrying a BB gun, according to CMPD’s news release.
“Down here in Steele Creek working the polls just threatened by two white males (and) a white female who called me a N***a, Black piece of s*** and he exposed his weapon,” Partee wrote in his post, but using uncensored language. “I had to back off and call CMPD, folks are getting bold and forward in the time.”
In an interview with the (Raleigh) News & Observer Wednesday night, Partee said he arrived at the polling place around 2:30 p.m. when a fellow volunteer pointed out the three people in the parking lot who had been taking photos that day and previously. Partee, who is a retired homicide detective from New York, said he decided to take down the license plate number of their car — but before he could, the man with the apparent gun jumped out of the car and confronted him.
“He said something about being a Republican, I said I am a Republican, he said ‘Motherf***** you ain’t s***,’” Partee said.
“They didn’t care whether I was a Democrat or a Republican, they just cared that I was black.”
Partee said around 6:30 p.m. that he was still at the polls stumping for conservative candidates, and the three people who threatened him hadn’t returned.
Partee said he has lived in Charlotte for the last six years and for the last year has been the vice chairman of the GOP’s group for the 12th Congressional District, where volunteers like him are working to unseat Democratic Rep. Alma Adams. Adams is being challenged this year by Republican candidate Paul Wright.
Dallas Woodhouse, the executive director of the state Republican Party, said Partee’s report has spurred the party to make sure officials and volunteers know to watch out for potential attacks.
“The NCGOP condemns all forms of political violence and voter intimidation, no matter the source,” Woodhouse said Wednesday night. “Our county offices are already under heightened states of scrutiny due to vandalism we have already seen at offices this year, and the unsolved political terrorist firebombing of our Orange County offices in 2016.”
That 2016 firebombing was never solved, although authorities have long suspected local anarchists, according to previous reporting by the News & Observer.
CMPD said in its release that the department formed a team of officers to investigate the incident “and they were able to quickly identify all three of these individuals.” The incident occurred in the 11100 block of South Tryon Street, police said.
At about 9:15 p.m. Wednesday, police said, “the suspect was located and arrested without incident. The suspect was carrying a BB gun in a holster which was located and seized as evidence.”
Police said they were interviewing the suspect late Wednesday. “Once the interview has been completed and he has been formally charged at the Magistrate’s office, his name will be released,” the news release said.
CMPD is discussing with the FBI whether federal charges “may be appropriate,” according to the news release.
The department plans to conduct checks at all polling sites through the Nov. 6 election, police said.