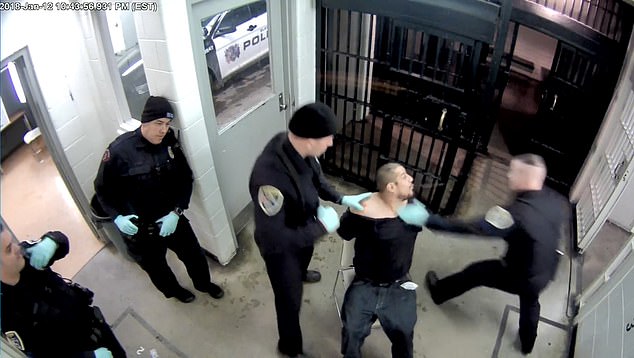 Two Indiana police officers caught on video brutally punching a handcuffed man more than 10 times have been charged with battery nearly a year after the incident.
Surveillance footage from the Elkhart Police Department shows officers Cory Newland and Joshua Titus standing in the station's detention area by Mario Guerrero Ledesma following the suspect's January 12 arrest.
In the video, Ledesma can be seen with his hands cuffed behind his back as he prepares to spit at the officers before Newland warns him not to.
When Ledesma ignores the warning and projects saliva anyway, the officers immediately tackle him to the ground, slamming his head into the concrete floor.
They then proceed to beat into Ledesma for several seconds while hurling expletives at him.
Three other officers who were watching the beating from the sidelines eventually tell Newland and Titus to stop.
Video of the incident was released 11 months after the fact following a request by the South Bend Tribune, which has been conducting an ongoing investigation into the department with nonprofit news organization ProPublica.
Newland and Titus will be charged with misdemeanor counts of battery, department officials announced Friday.
They've both been placed on administrative leave pending the outcome of the case.
The Tribune reported that the two officers were reprimanded for the incident five months ago, around the time that Ledesma pleaded guilty to charges of domestic battery and resisting arrest in June.
The outlet requested the surveillance video in mid-October after a reporter noticed a disparity between the description police Chief Ed Windbigler gave to city officials and what was written in personnel records.
In a June 12 letter of reprimand to Newland, obtained by the Tribune, Windbigler wrote: 'I completely understand defending yourself during an altercation. However, striking a handcuffed subject in the face is not acceptable and will not be tolerated.
'We cannot let our emotions direct our reactions or over-reactions to situations such as this.'
The following week at a Police Merit Commission meeting, chairman James Rieckhoff asked Windbigler if anyone had been injured during the incident in question, to which the chief replied: 'No.'