The only human disease ever eradicated, smallpox, was eradicated using a vaccine. In the 18th century, scientist Edward Jenner decided to follow up his observation that dairy workers who had contracted a relatively mild cowpox infection were immune to the deadly smallpox virus. In 1796, he performed his first vaccination on James Phipps, his gardener’s 8-year-old son. Jenner inoculated Phipps in both arms, making Phipps develop a fever and some uneasiness, but no full-blown infection. Later, Jenner injected Phipps with variolous material, and no disease followed. The boy was later challenged with variolous material once again, and just like the first time, showed no sign of infection. Jenner successfully repeated the test on 23 other subjects, including his 11-month-old son. Now, he’s referred to as “the father of immunology”, and his work is said to have “saved more lives than the work of any other human.”
Few public health measures can compare to vaccines. Vaccinations have reduced disease, disability, and death from a variety of infectious diseases. In addition to saving lives, vaccination has resulted in economic benefits to societies, amounting to almost $69 billion in the United States alone. A recent economic analysis of 10 vaccines for 94 countries estimated that a $34 billion immunization investment resulted in savings of $586 billion in reducing costs of illness and $1.53 trillion when broader economic benefits were included. But despite the overwhelming abundance of evidence, some people choose not to vaccinate their kids.
In response, Dr. Charles Goodman and other doctors are adopting a new policy. They will no longer see children and/or their parents who don’t get them vaccinated. “Parents who choose not to give measles shots, they’re not just putting their kids at risk, but they’re also putting other kids at risk — especially kids in my waiting room,” Dr. Goodman said.
As doctors continue “firing” patients who believe debunked research linking vaccines to autism, some mothers who have been dropped feel “betrayed and upset.” Dotty Hagmier, founder of the support group Moms in Charge added that these parents made up their minds about vaccines after “careful research and diligence to understand the risks versus the benefits for their own children’s circumstances.” Some add that by dropping these people doctors might be sending them to quacks.
The American Academy of Pediatrics stated that doctors should speak of the importance of vaccinations during visits but should respect parents’ wishes unless there’s a significant risk to the child.

Vaccinations have reduced disease, disability, and death in staggering numbers but some people still believe in debunked research linking them to autism 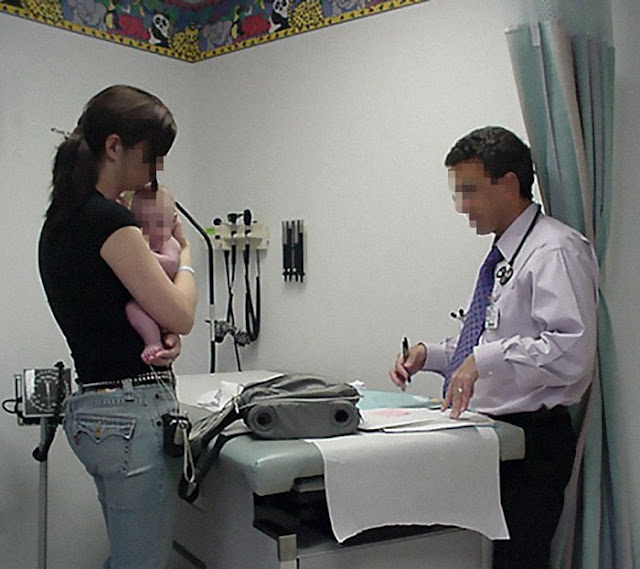 In response, one doctor has decided to change their policy 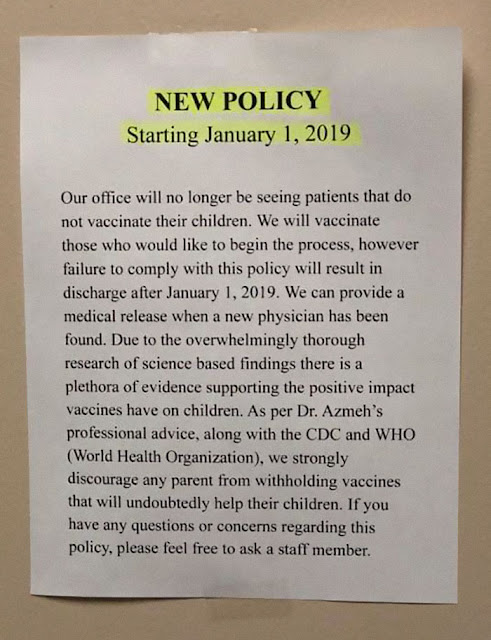 “Our office will no longer be seeing patients that do not vaccinate their children. We will vaccinate those who would like to begin the process, however failure to comply with this policy will result in discharge after January 1, 2019. We can provide a medical release when a new physician has been found. Due to the overwhelmingly thorough research of science based findings there is a plethora of evidence supporting the positive impact vaccines have on children. As per Dr. Azmeh’s professional advice, along with the CDC and WHO (World Health Organization), we strongly discourage any parent from withholding vaccines that will undoubtedly help their children. If you have any questions or concerns regarding this policy, please feel free to ask a staff member.”

Other health professionals are also doing this 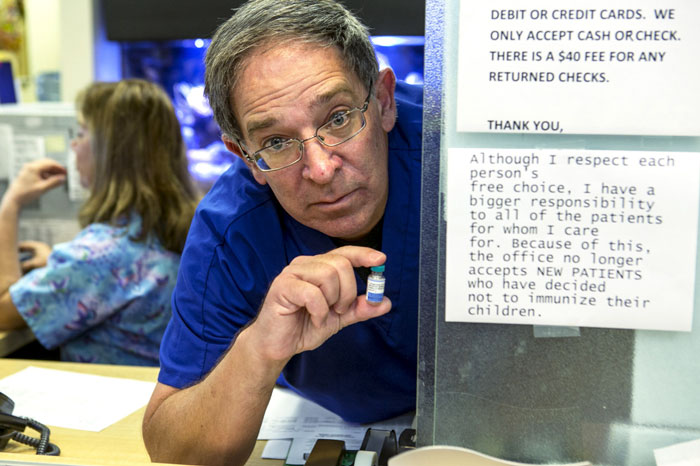 “Although I respect each person’s free choice, I have a bigger responsibility to all of the patients for whom I care for. Because of this, the office no longer accepts NEW PATIENTS who have decided not to immunize their children.”

As doctors continue “firing” these patients, some parents who have been dropped feel “betrayed and upset” 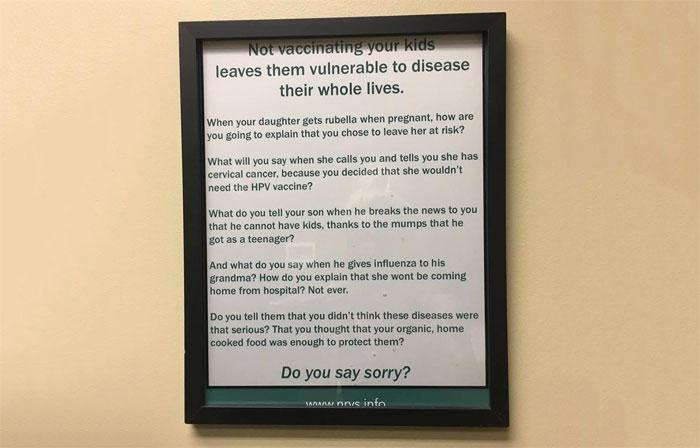 “Not vaccinating your kids leaves them vulnerable to disease their whole lives. When your daughter gets rubella when pregnant, how are you going to explain that you chose to leave her at risk? What will you say when she calls you and tells you she has cervical cancer, because you decided that she wouldn’t need the HPV vaccine? What do you tell your son when he breaks the news to you that he cannot have kids, thanks to the mumps that he got as a teenager? And what do you say when he gives influenza to his grandma? How do you explain that she won’t be coming home from hospital? Not ever. Do you tell them that you didn’t think these diseases were that serious? That you thought that your organic, home cooked food was enough to protect them? Do you say sorry?” 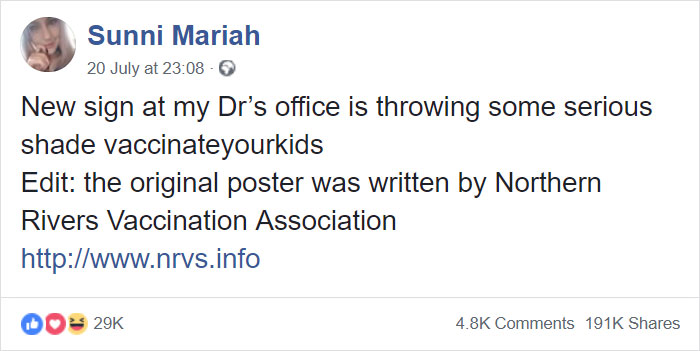 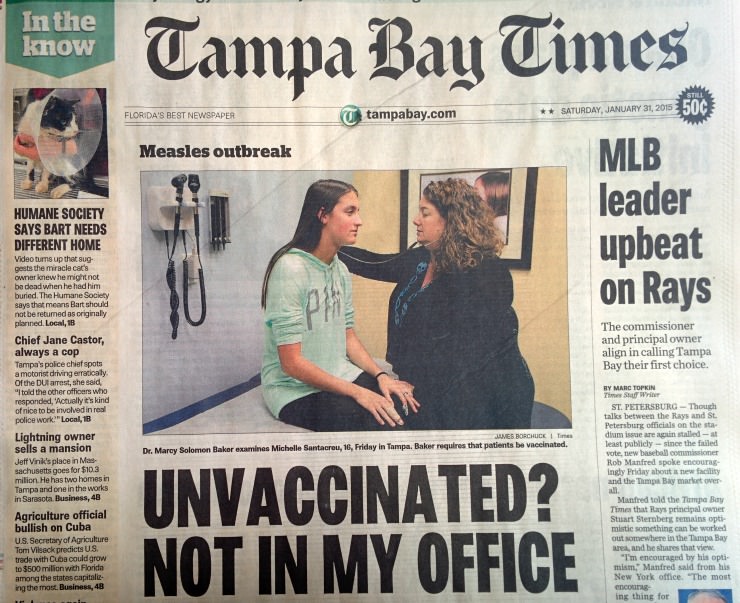 People had a lot to say about this subject