Fentanyl is now officially the deadliest drug in America, CDC declares: The drug killed more than 18,000 in 2016 - with overdose rates rising 113% a year

Fentanyl is the deadliest drug in the US, a new CDC report revealed today.
A report last week showed drug overdoses climbed again last year, largely driven by fentanyl use.
But new data released today reveal just how quickly fentanyl has taken hold of (and decimated) America.
The drug - 100 times stronger than heroin - killed at least 18,335 Americans in 2016, the latest year for which we have data.
And that figure is set to climb. The report also revealed that between 2013 and 2016, overdoses from fentanyl rose 113 percent a year.
Cocaine and heroin are still by far the most popular street drugs. A recent study, interviewing drug users, found there is little demand and no common street slang for fentanyl.
But fentanyl is so potent (two milligrams is lethal), mysterious (most dealers aren't sure the strength of their product), ubiquitous (it's cut into everything), and impossible to detect that it is much more lethal. 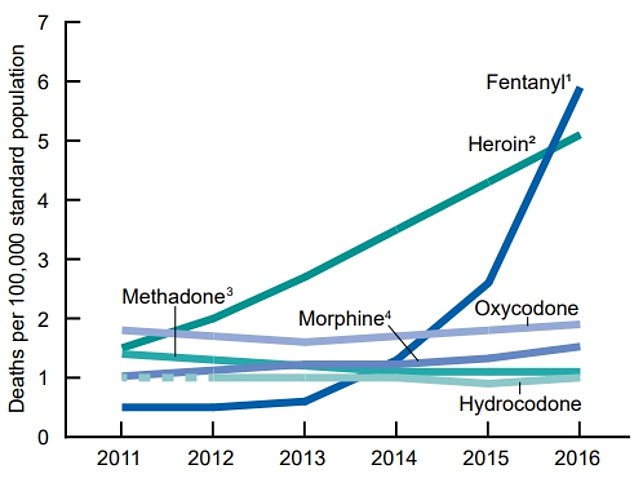 'The drugs most frequently involved in overdose deaths change quickly from one year to the next,' Dr Holly Hedegaard, a medical epidemiologist at the US Centers for Disease Control and Prevention's National Center for Health Statistics, said.
Most overdose deaths involve multiple drugs, Hedegaard said.
'A lot of the deaths that mention fentanyl also mention heroin, and a lot of the deaths that mention cocaine also mention fentanyl,' she said.
Those who do seek out fentanyl specifically tend to be longer-term heroin or opioid users, who had built up a tolerance to the effects, according to a report published last week by the University of California, San Francisco.
Fentanyl's effects are shorter but stronger. They cut through the body's resistance to give them a feeling of euphoria.
However, the UCSF report found that most people who consume fentanyl do not actively seek it out. There is no fanfare about the drug, as there is for others like cocaine and heroin.
Often, it's cut into other drugs - drugs which can be taken in larger quantities without it being lethal.
But even a pinch of fentanyl can push them over their high and into a coma.
The reason fentanyl infected the US market was unusual.
Analyzing the shift, the UCSF team said it seemed to be part of a much bigger, longer-term strategy from global trafficking groups as the demand for opioids shot up dramatically in the US.
Prescription rates have skyrocketed in the US over the last three decades, demand for any kind of opioid soared. Many patients would be prescribed highly-addictive opioids, but then wouldn't be able to afford more. So they would turn to heroin.
It was a dramatic shift in a very short space of time.
But heroin is timely and complicated to make. It is beholden to the poppy-growing season, and can be susceptible to pests.
Fentanyl, meanwhile, is entirely lab-made. It can be produced year-round at a much cheaper rate - and it's 40 times stronger.
'The full motives of wholesale suppliers still remain hidden, but there are significant incentives for them to shift over partially or completely to fentanyl, even though it often causes users to overdose,' the researchers said, adding: 'It may just be a matter of time before fentanyl takes over more of the illicit US and worldwide drug market, as has already happened in Estonia [home to a devastating overdose crisis].'
Questions surrounding fentanyl are not new, but reached new heights last week, when the CDC published new data showing another rise in overdose deaths in 2017, primarily driven by the synthetic drug.
The new data add more pressure.
According to the Drug Enforcement Agency, most of the supply is routinely traced back to wholesalers in China.
Last Monday, President Donald Trump addressed that, promising (again) that China would curtail its supply, though offering few details on how that would happen.
But the fact remains that fentanyl is now ubiquitous in the US drug market (just last month two 19-year-old boys died after taking a Percocet that they didn't know was laced with fentanyl), and its not clear how to weed it out.
'Fentanyl is rarely sold as fentanyl,' said Sarah Mars, PhD, a researcher in the Department of Family and Community Medicine at UCSF and the first author of the paper.
'The dealers selling fentanyl directly to the users often don't know what's in it. Not only is this particularly dangerous, but it also means penalizing low level dealers isn't going to make any difference in the fentanyl poisoning epidemic.'