Grandmother, on hormones for menopause, gets go ahead to sue Miami jail for tossing her in with 40 men

Five years ago authorities in Miami arrested then-55-year-old grandmother Fior Pichardo de Veloz on an old drug charge and proceeded to toss her into an all-male jail, forcing her to experience indignities that she’s long since argued warrant a lawsuit. 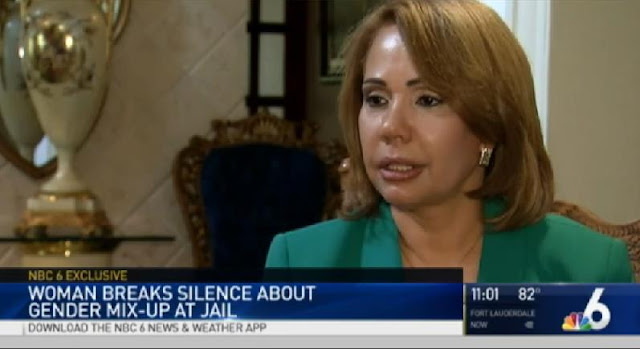 Yet when she later filed suit against both the county and the jail stuff, arguing that she’d been subjected to “cruel and unusual punishment,” a federal judge threw out the suit on the pretense that the jail staffers were protected from allegations of negligence.
The following news report was published shortly after her initial arrest in 2013:
Thanks to a federal appeals court, Pichardo’s lawsuit is officially back on.
“Every reasonable prison officer and medical personnel would have known that wrongfully misclassifying a biological female as a male inmate and placing that female in the male population of a detention facility was unlawful,” Judge Frank Hull of the U.S. Court of Appeals for the Eleventh Circuit wrote in an unanimous opinion last month.
Pichardo’s attorneys were pleased.
“The opinion correctly held, as we believed, that the defendants could not be so struthious as to ignore the overwhelming evidence in front of them that Mrs. Pichardo was in fact female,” one said.
According to the Miami Herald, which has reviewed the 27-page opinion, Pichardo is an elected official from the Dominican Republic who traveled to Miami in 2013 to witness the birth of a grandchild.
Instead she wound up being arrested at Miami International Airport on an outstanding warrant from an old cocaine possession case. It’s what happened after her arrest that continues to haunt her.
Despite her being strip searched at the Turner Guilford Knight Correctional Center booking center and initially classified by corrections officers as a female, a jailhouse nurse by the name of Fatu Kamara Harris was doubtful of her gender.
Why? Because the grandmother had previously been prescribed hormone pills for menopause. According to Harris, however, the hormone pills were suggestive of something else.
These doubts were seemingly confirmed shortly thereafter by Dr. Fredesvindo Rodriguez-Garcia, who concluded during a faux examination that Pichardo is a man. He reached this conclusion without actually inspecting the grandmother’s body or even asking her about her hormone treatment.
Harris, who was already falsely convinced of the grandmother’s status as a transgender woman, then shared this erroneous conclusion with the rest of the jail.
“Even though Harris, the nurse, was not in the exam room, she inexplicably told the jail officer that the exam had revealed ‘everything fell out’ — meaning, Pichardo’s supposed male genitals had been discovered,” the Herald notes.
Because of these false classifications, she was transferred the Metro West Detention Center, an all-male jail, and tossed into a large holding cell that reportedly contained roughly 40 men.
“When I was there, I saw some of the men rushing to the bathroom actually naked,” she revealed during an interview with a Miami station in 2016, the year that her suit went viral.
The men likewise jeered at her, calling her “mami!” and scaring her so much that she reportedly urinated on herself instead of using the communal toilet.
The colossal mistake wasn’t realized by jailers until Pichardo’s family members reportedly complained to officials at the Turner Guilford Knight Correctional Center.
In response TGK officials requested that the jailers at Metro West perform another examination. While the jailers complied, they did so in a way that left Pichardo feeling even more humiliated, she claims.
“She recalled several male officers laughed at her during the examination. She remembered someone took a photo of her while she was undressed. A nurse immediately realized the mistake — and Pichardo was soon transferred back to TGK,” the Herald notes.
But by then the damage had already been done.
The good news is that this humiliated grandmother finally has her chance at achieving justice. The bad news is she isn’t guaranteed a victory. According to some on social media, mind you, she certainly deserves one.
Look:

According to others, Harris and Rodriguez-Garcia aren’t even necessarily to blame for this fiasco. Instead it’s the pseudoscience of transgenderism that truly deserves blame.
Look:

Thanks to trannies, doctors see hormone replacement in a file and assume a menopausal woman is a male, and put her in a holding cell with 40 males, who all know that SHE IS FEMALE. Dudes. THIS IS WHY I HATE YOU.https://t.co/nI5FB2H0E3
— ManLogicksXX (@MLogicks) December 2, 2018

At what point do we say” BORN WITH MALE PARTS MALE BORN FEMALE PARTS FEMALE” Maybe when some of these dumbass #liberals #Snowflakes making these “laws” are PAINFULLY RAPED IN JAIL? https://t.co/B6reR1oyCZ
— Mike (Mr. Saltine) (@Pookies_8) December 2, 2018