Black-and-white photographs showing the horror and heroes of the Korean War have come to life thanks to digital colourisation.
These incredible images show many different sides of the war between North and South Korea, which started in 1950 and ended with an armistice in 1953.
One photo shows a memorial service for fallen U.S. soldiers on the front line, another a young John Glenn - who would go on to become the first man to orbit the Earth as an astronaut and later a U.S. Senator.
Other striking shots show soldiers and vehicles struggle through snowy conditions, a US soldier giving a young Korean child a gift and a brave bagpiper on a hill. 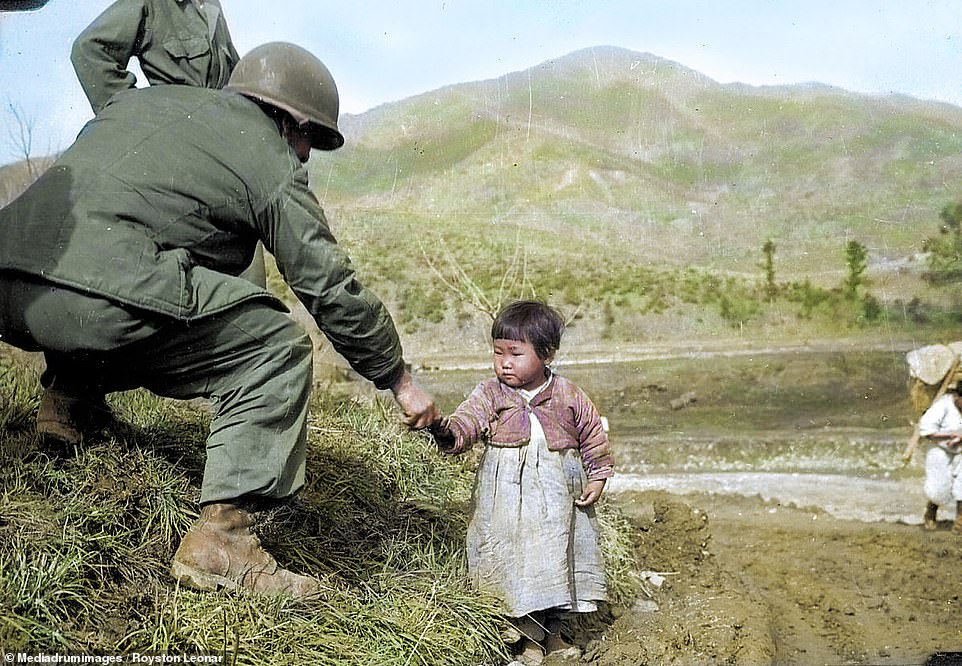 Korean War come to life: Black-and-white photographs from the Korean War, such as this one showing a U.S. soldier handing something to a little girl, have been painstakingly colourised by a British enthusiast 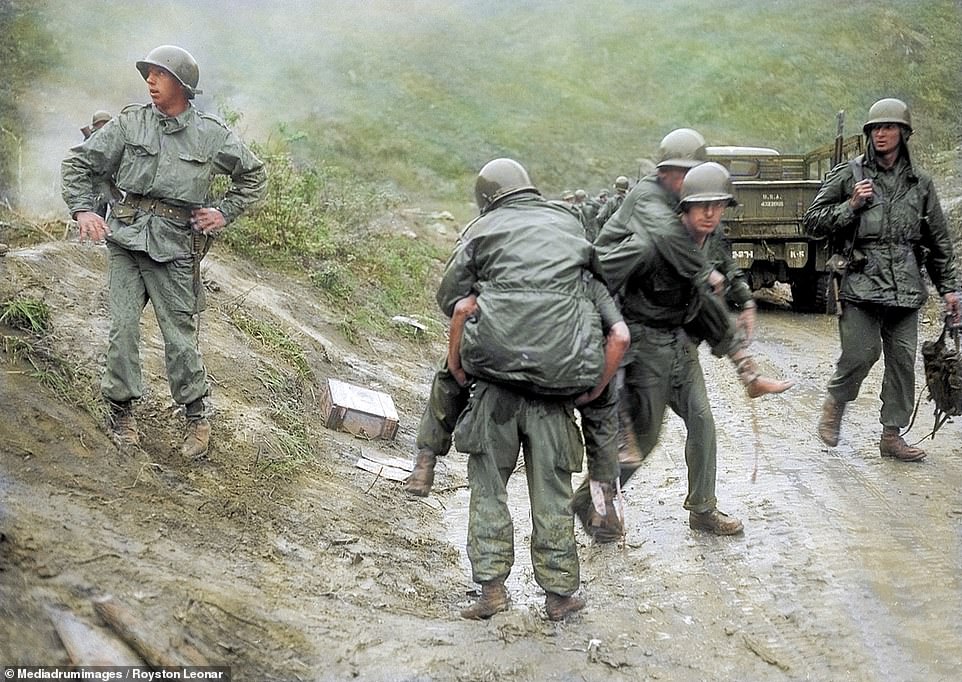 On the front line: Soldiers are pictured carrying fellow wounded servicemen in one of the colourised images 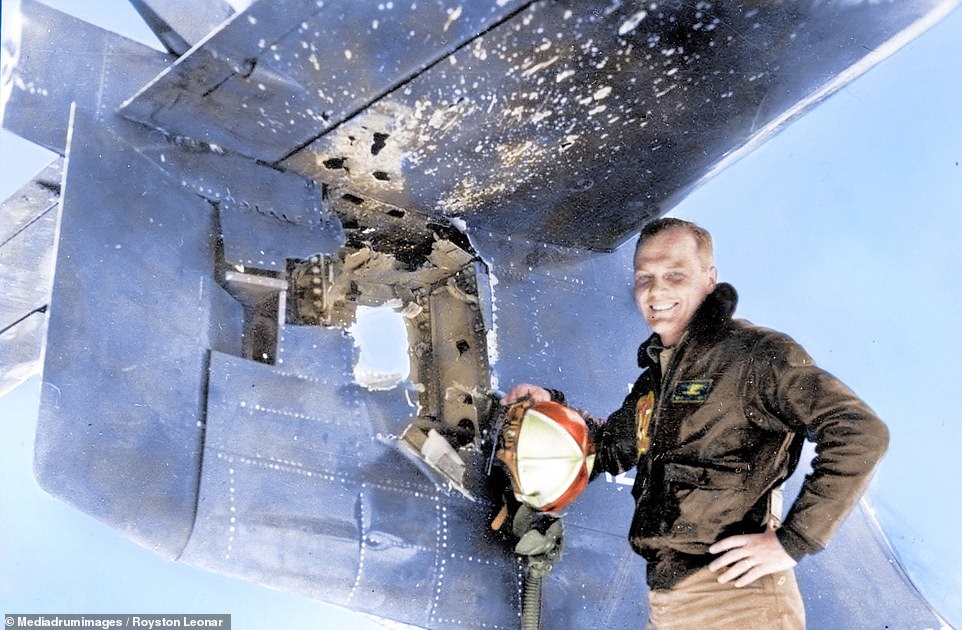 American hero: Major John Glenn, of the United States Marine Corps, who a few years later would become an astronaut and the first man to orbit the Earth - and eventually a U.S. Senator - is seen inspecting his Panther Jet after surviving a flight which saw enemy fire blow more than 250 holes in it
The original black and white photographs were painstakingly colourised by electrician Royston Leonard, 55, from Cardiff, Wales, with each snap taking between four and five hours to complete.
'Adding colour brings to life the horror of war, of the trenches and not just another old black and white photo from long ago,' he said.
'We must never forget and teach all our children so that it never happens again. The pictures are not nice but then nor is sending loved ones to war.' 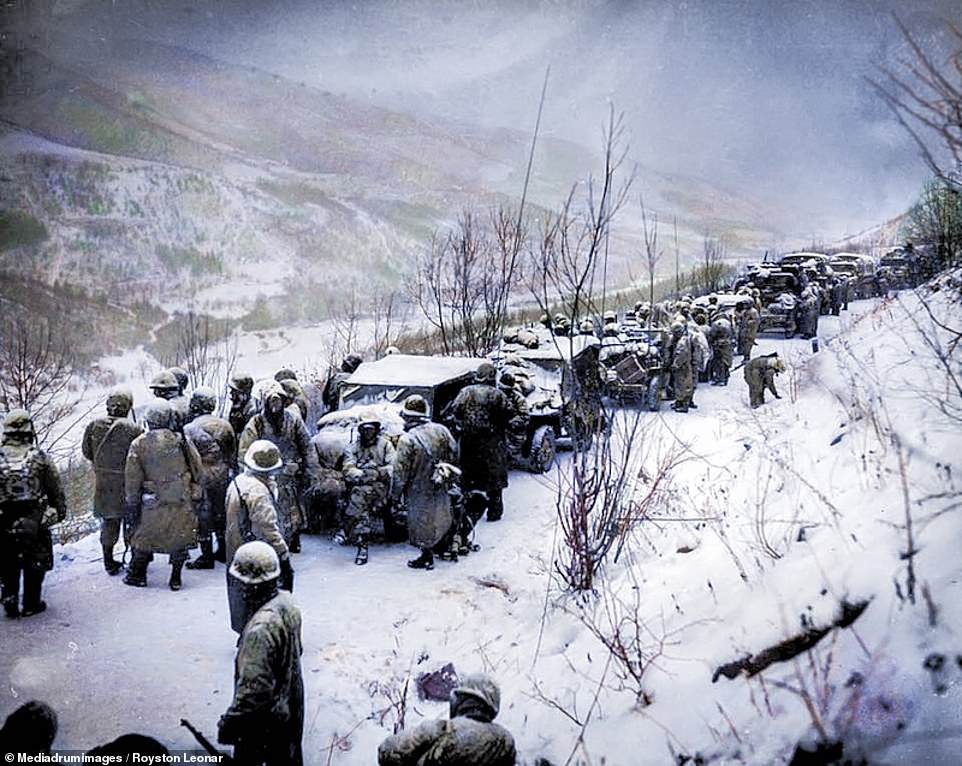 Frozen road: U.S. Army soldiers and vehicles struggle through the snow as they march in wintry conditions 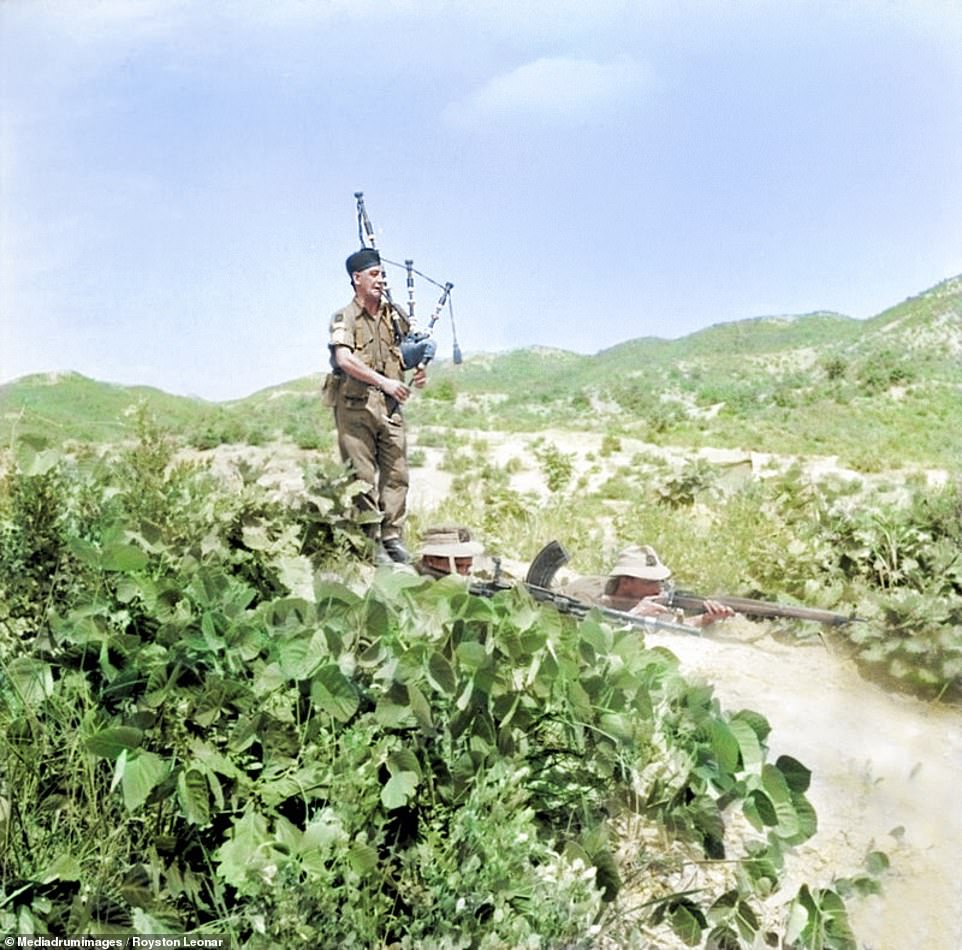 Proud tradition: A lone bagpipe player is seen standing above two soldiers. His nationality is not clear, however the bagpipe is most commonly associated with the Scottish Highlands. While a majority of the Western soldiers who fought and died in the Korean War were from the U.S., thousands of British and Commonwealth troops also served 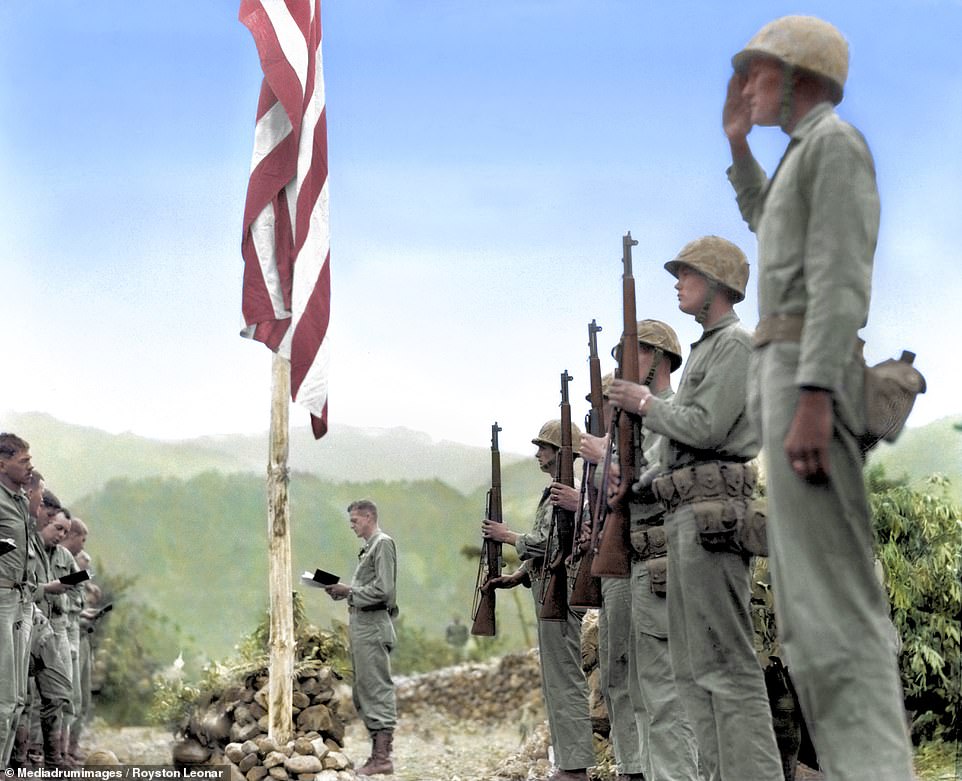 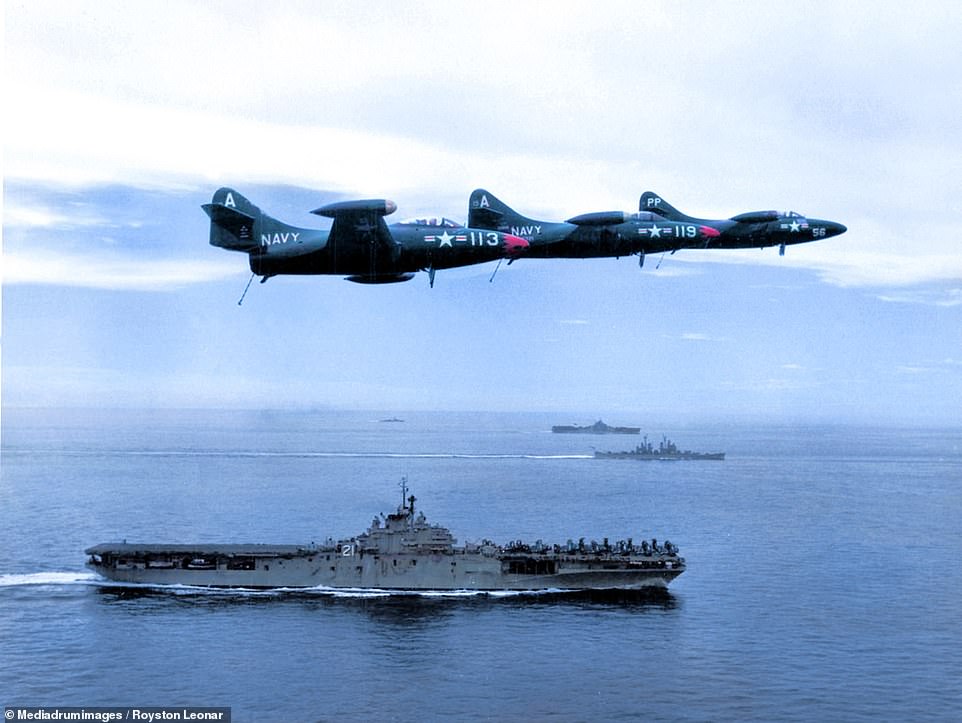 At sea and in the air: Several U.S. Navy fighter planes flies over a navy ship during the Korean War 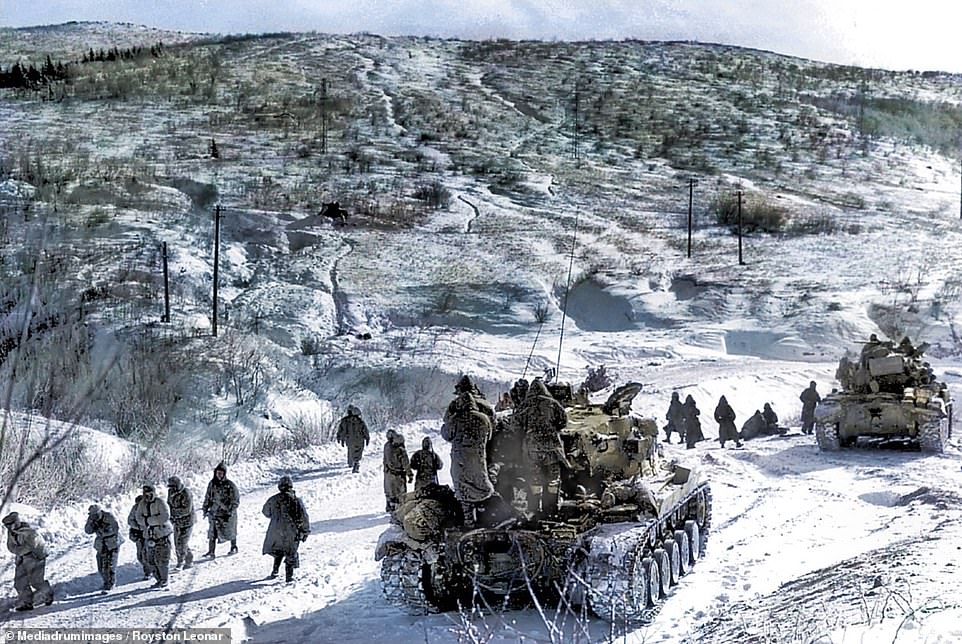 Hard work: The original black and white photographs were painstakingly colourised by electrician Royston Leonard, from Cardiff, Wales, with each snap taking between four and five hours to complete
The Korean War was sparked by communist North Korea invading South Korea following a series of clashes by the border.
The United Nations, with the United States as the principal force, came to the aid of South Korea, with China and the Soviet Union providing assistance to the North.
The fighting ended on 27 July, 1953, when an armistice was signed. The agreement created the Korean Demilitarized Zone to separate North and South Korea, and allowed the return of prisoners.
However, no peace treaty has been signed, and the two Koreas are technically still at war. 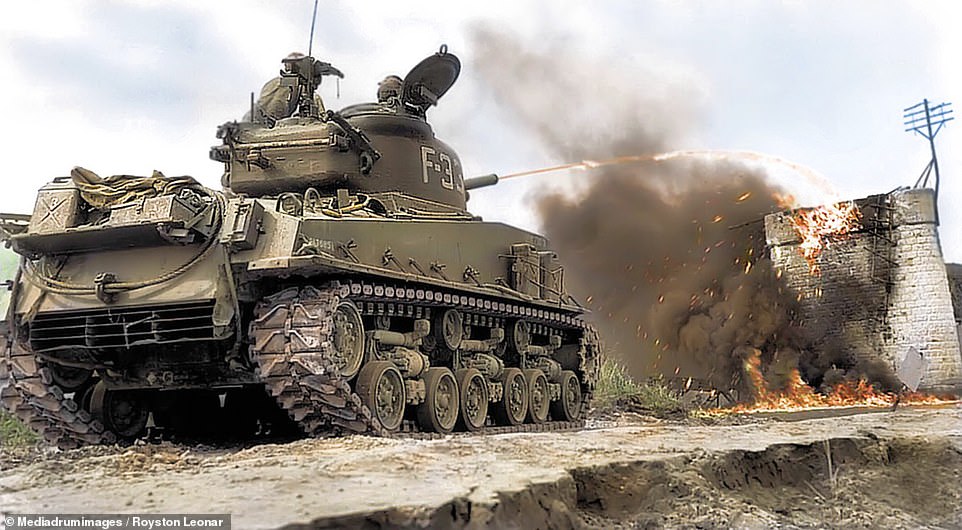 Set the world on fire: A U.S. Army Sherman tank is seen using a flame thrower to destroy anything in its path 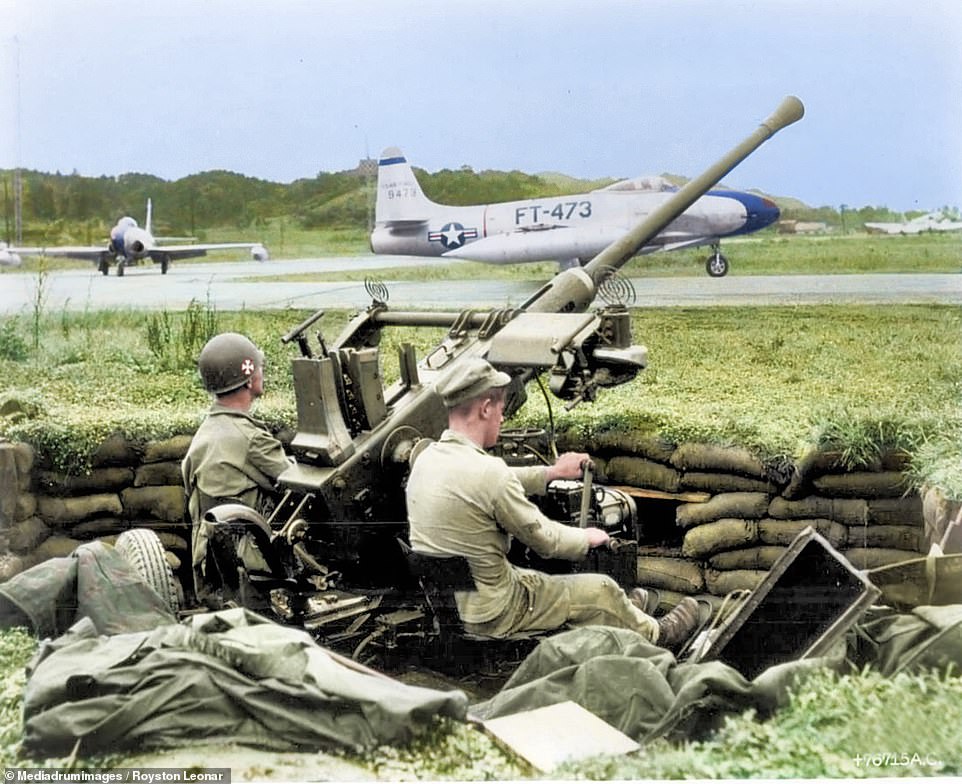 Man the guns: U.S. soldiers are pictured at an airfield in an unknown location during the Korean War 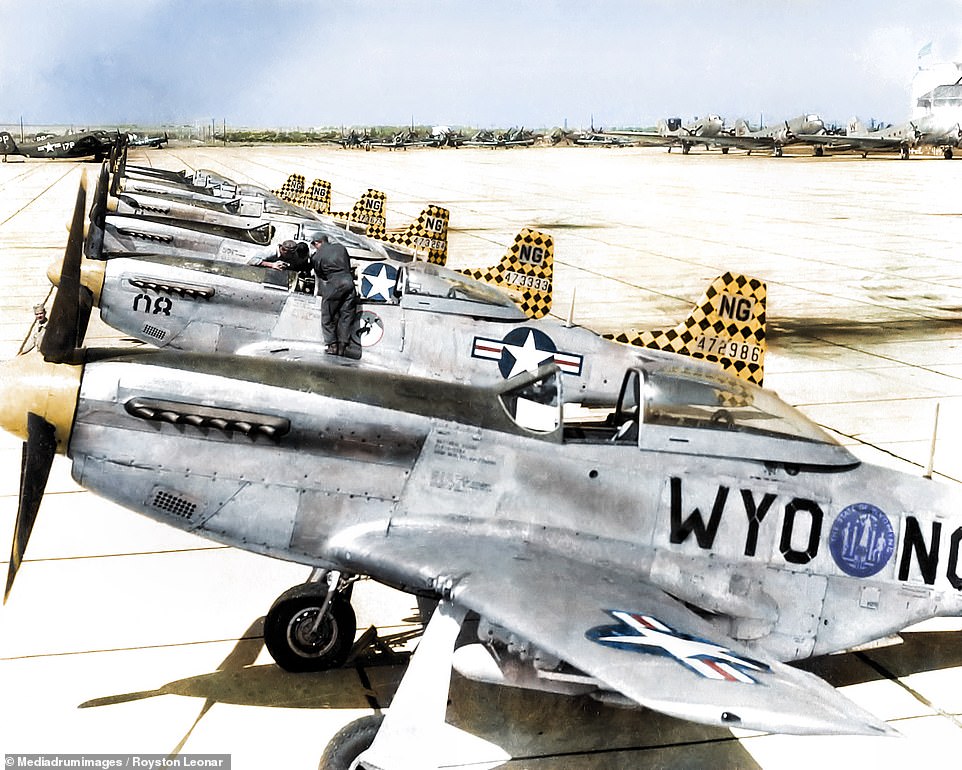