Ohio children write letters to GM begging to spare their town’s auto plant: ‘Lordstown doesn’t have much, but they have GM’

Children in Lordstown, Ohio, are writing letters to General Motors, begging the company to spare their town's auto plant.
In November, GM announced that they would be closing several plants in North America — including the plant in Lordstown — in March 2019.
About 15,000 people are expected to be impacted by the plant closures. The Lordstown plant employs about 1,400 workers who will surely lose their jobs if the plant isn't repurposed.
The plant has been in operation since 1966, but faced a closure in 2002. The plant ultimately remained open.

What are the kids saying?

WEWS-TV reported that students in the Lordstown area are writing letters to GM executives in Detroit to try to persuade them to change their minds about closing the Lordstown plant.
The students' letters are part of a communitywide movement called "Drive It Home" to retain the plant and save local jobs. GM workers, families, and union members are all part of the campaign in addition to local students.
One student, Jimmy Moyers, told the station, "Lordstown doesn't have much, but they have GM, and they depend on it."
Alyssa Brookbank, a school teacher, added, "Kids are worried about if they are going to have a Christmas this year. Are we going to be able to take a family vacation? To kids, that means the world. Seeing this in the eyes of a child gives a whole different perspective."
Dave Green told CNN that the union hopes the campaign will persuade change GM execs' minds.
"We are determined to do everything we can to convince General Motors to make Lordstown part of the future of auto manufacturing for this great company that we have been like family with for 52 years," Green said in a November statement.
The station reported that the local school district hopes to write 1,000 letters to GM CEO Mary Barra, and the local United Auto Workers has plans to hand-deliver letters to the Detroit headquarters.
You can see an example of one of the letters below.
Lordstown Schools wrote, "Our Lordstown Elementary students and staff supporting the Drive it Home campaign!" 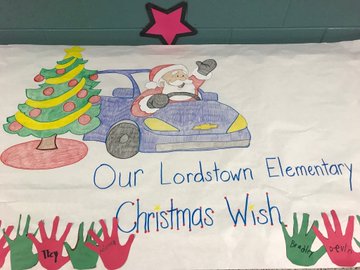