In the heart of Harlem, in New York City, at the northwest corner of 128th Street and 5th Avenue, lies a small rectangular lot. A sign from the NYC Parks Department attached to the perimeter fence identifies the nearly empty lot as the “Collyer Brothers Park”. It is one of New York City’s smallest parks with a couple of benches, a few potted plants and a number of trees for providing shade. New York City has dozens of such ‘pocket parks’ scattered throughout the city, so this is nothing unusual. What’s unusual is the story of the brothers after which the park is named. 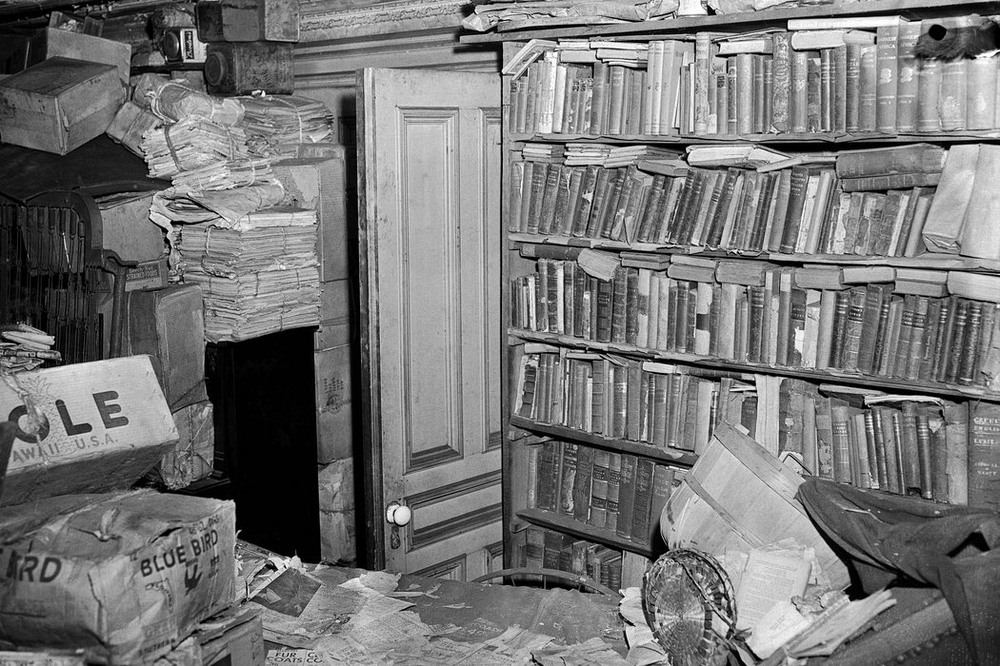 Homer and Langley Collyer were both born in the 1880s to one of New York’s most respectable families. Their father was a gynecologist and their mother was a former opera singer and descendant of Robert Livingston, the first Livingston family to immigrate to America in the 17th century, only half a century after the historic journey of the Mayflower. The brothers lived with their parents at 2078 Fifth Avenue—the corner house that stood at the very lot now occupied by the Collyer Brothers Park.
Dr. Collyer was known to be eccentric. He often paddled himself to work on a canoe down the East River to the City Hospital on Roosevelt Island where he worked, and then carried the canoe back to his home through the city streets during his commute to and from the river. The brothers, as they aged, followed increasingly in their father’s odd footsteps.
Dr. Collyer died in 1923, followed by his wife and Homer’s and Langley’s mother in 1929, leaving the brothers possession of the Harlem property. For the next four years, Homer and Langley led a pretty normal life socializing with neighbors and teaching Sunday school at the Trinity Church. Homer was a lawyer, and Langley was an engineer, although he never practiced his profession, instead preferring to devote his time to music. He was a professional concert pianist. 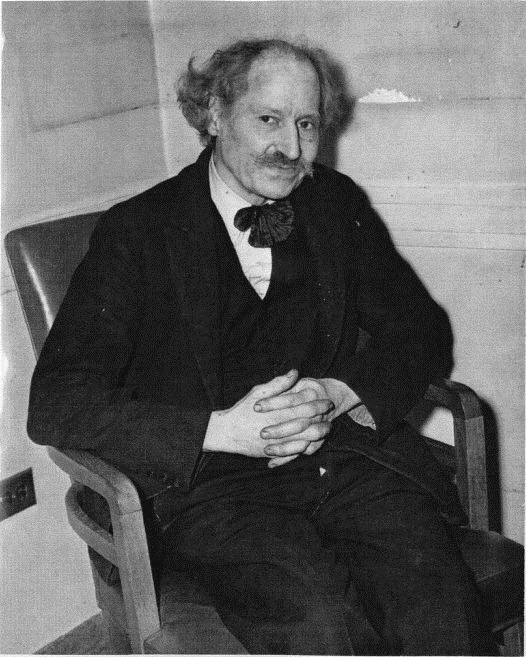 Langley Collyer.
In 1933, Homer lost his eyesight due to hemorrhages in the back of his eyes, prompting Langley to quit his job so that he could take care of his brother, and the two began to withdraw from society. As time progressed, the brothers became fearful of the changes happening in the neighborhood. The Great Depression had dramatically altered the economics of the society, while the large number of African-Americans moving into the neighborhood disturbed them. When teenagers started throwing rocks at their windows, they boarded up the windows and shut themselves from the rest of the world. The more recluse the brothers became the more interested the neighbors grew of their eccentricities, causing the brothers to retreat further into their dark world. Rumors began to surface that behind their closed doors were vast riches and luxuries brought from the Orient. In reality, the brothers were slowly sliding into madness.
Langley spent the majority of his time tinkering with various inventions, such as a device to vacuum the inside of pianos and a Model T Ford adapted to generate electricity. He also laid booby traps all over the house, should anyone intrude. After midnight, Langley would venture out of the house and walk miles all over the city to get food. Often, this meant rummaging through trashcans outside grocers and butchers. He also began dragging home all sorts of useless junk that he took fancy in and filled the house with them. The house soon became a maze of boxes, complicated tunnel systems consisting of junk and trash rigged with trip wires. The house had neither gas nor electricity nor water—they were all turned off because of unpaid bills.
Langley also hoarded thousands of newspapers carefully bundling them together so that his brother can catch up on the news once he regained his eyesight. Langley was confident his brother would recover, for he had devised a cure for his blind brother—one hundred oranges a week, black bread, and peanut butter. Of course, it didn’t work. Instead, Homer’s health started to fail and he became paralyzed due to inflammatory rheumatism. But the brothers refused to seek medical health. 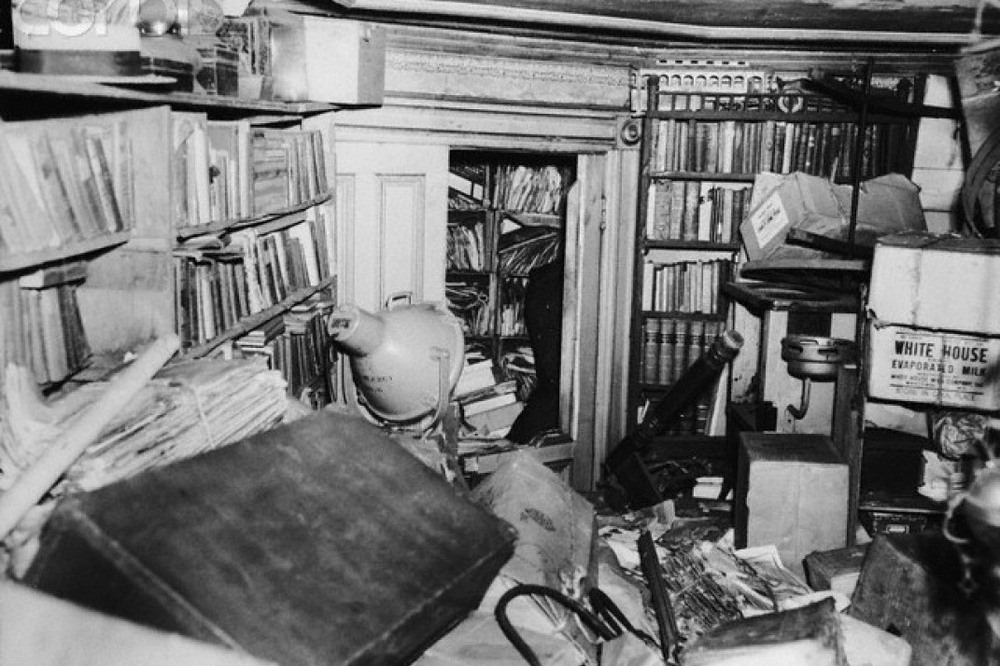 Ironically, their eccentric behavior only drew more attention that the brothers were trying to escape. Once when city workers had to force their way into the house to remove two old gas meters, the event attracted a crowd of one thousand onlookers, according to an article in The New York Times.
The severity of the Collyer brothers’ mental disorder only came to light in March 1947 when an anonymous person reported the smell of decomposition coming from the house. When the police arrived they couldn’t get into the house at first. A solid wall of junk made up of old newspapers, beds, chairs, and boxes, blocked the entrance. Eventually, a second floor window was broke open and after five hours of climbing and digging through millions of pieces of junk, Homer Collyer's body was found in an alcove surrounded by filled boxes and newspapers that were piled to the ceiling. Homer had starved to death. His brother Langley, however was missing.
The police theorized that Langley had fled and a massive manhunt was launched with searches conducted as far away as Atlantic City. Meanwhile, the house continued to turn up all sorts of strange items—a horse's jawbone, an early X-ray machine, baby carriages, lots of guns, more than 25,000 books, human organs pickled in jars, eight live cats, hundreds of yards of unused silks, fourteen pianos, two organs, and countless bundles of newspapers and magazines, among other things. All in all, a total of 120 tons of debris and junk was removed from the house. A crowd of more than two thousand people stood outside the home everyday to watch the clean-up effort.
Two weeks later, they found Langley Collyer’s body lying barely ten feet from where his older brother had died. Langley had unwittingly triggered one of his own booby traps and was crushed under an enormous load of newspapers, and metal boxes. Langley was bringing food to Homer through a tunnel he had created, when the tunnel collapsed and suffocated him. The brothers died within a few feet of each other. Homer probably died several days after Langley’s death. 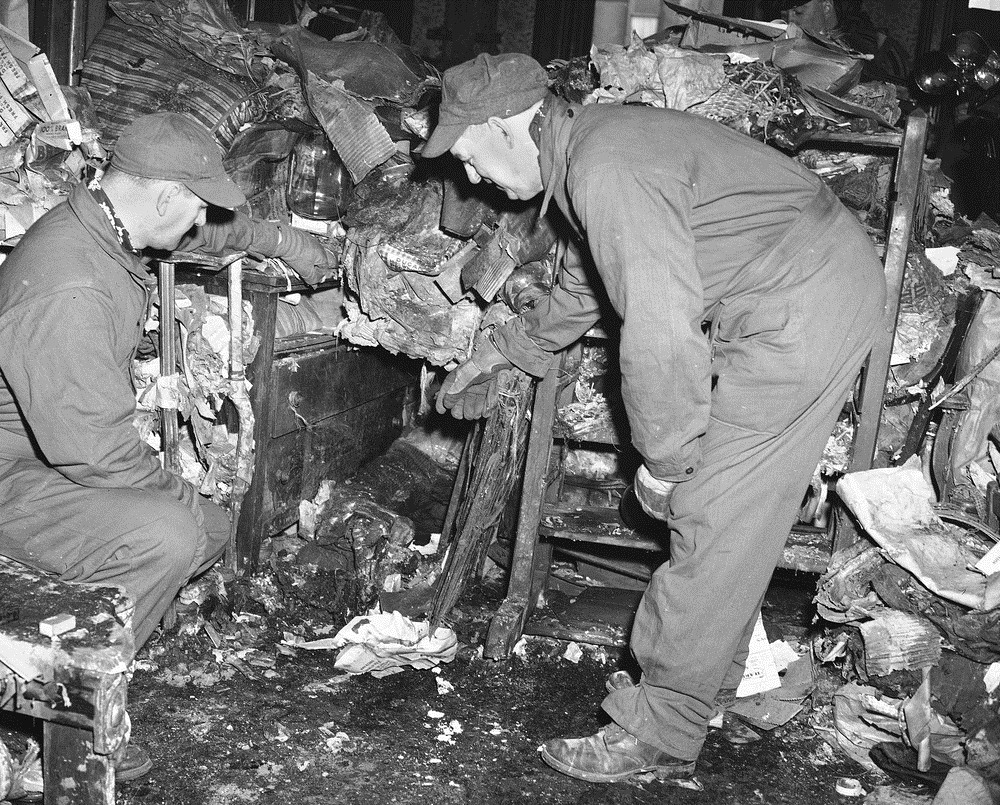 Detectives discover the half decomposed body of Langley Collyer.
In July that year, the house was demolished because it was beyond repairs, and in 1965, the 140 square meter site became one of New York City’s first pocket parks. For a long time after the discovery of their dwelling, the Collyers were a household name, as in New York moms lecturing their kids, “Get in there and clean your room— it looks just like the Collyer brothers.” To this day, whenever city’s firefighters come across houses stashed with trash and debris, they refer to it as “Collyer's Mansion”.
It wasn’t until very recently, in 2013, that compulsive hoarding was first defined as a mental disorder, although psychologists still can’t decide whether it is a manifestation of another condition, such as OCD or Obsessive Compulsive Disorder, or a disorder of its own. It is estimated that 2% to 5% adults suffer from hoarding. 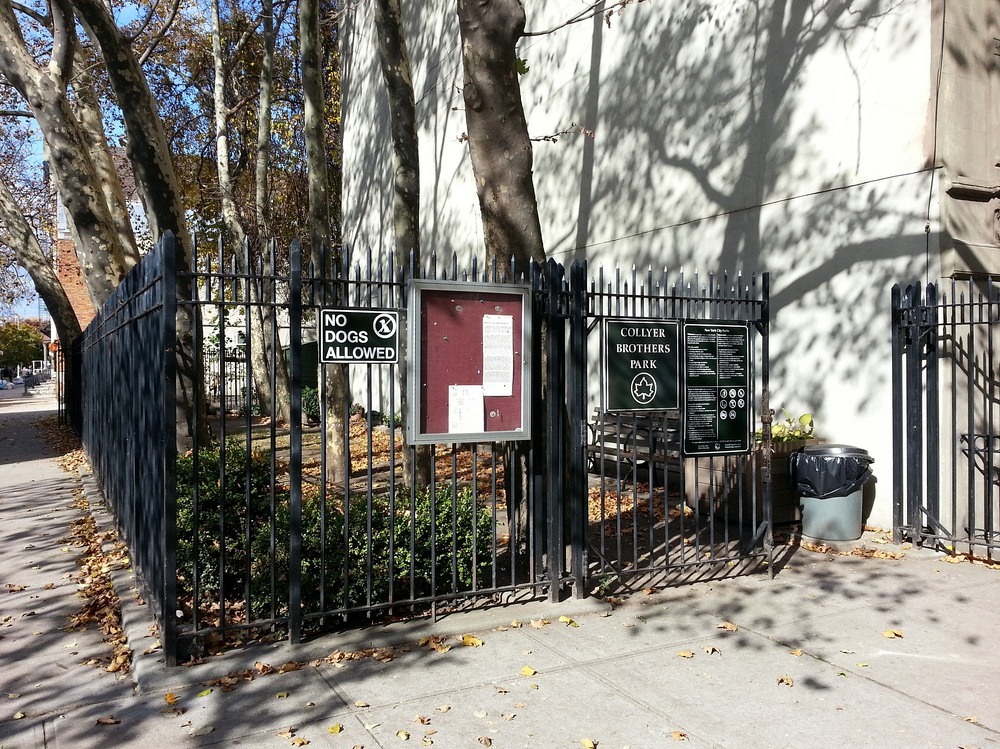 The Collyer Brothers Park at the former site of the row house once occupied by the Collyer brothers. Photo credit: Matt Green/Flickr 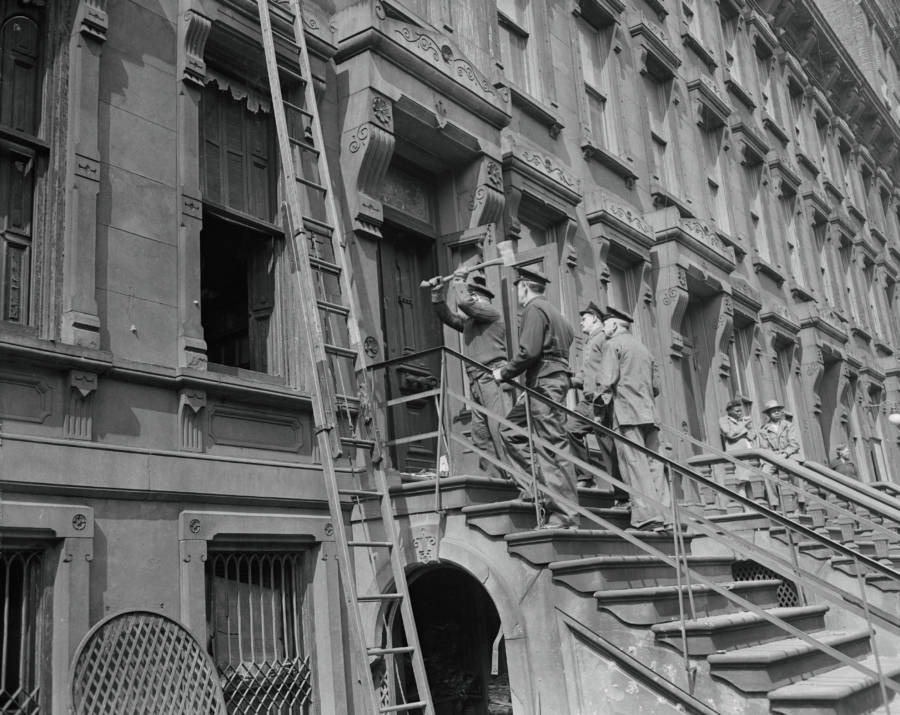 Policemen applying an axe to the front door of the Collyer Brothers’ house. 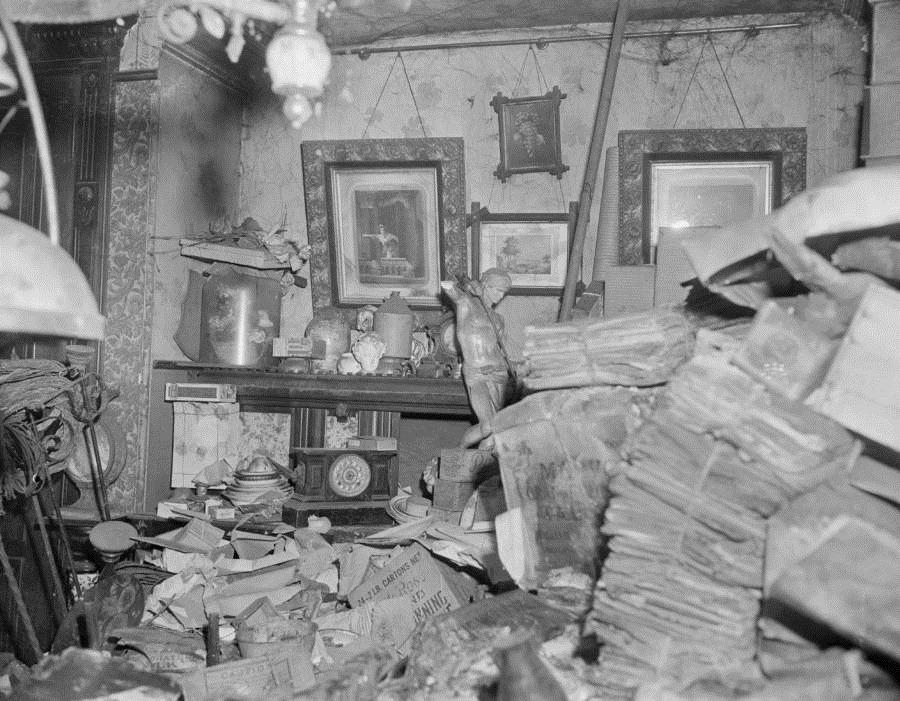 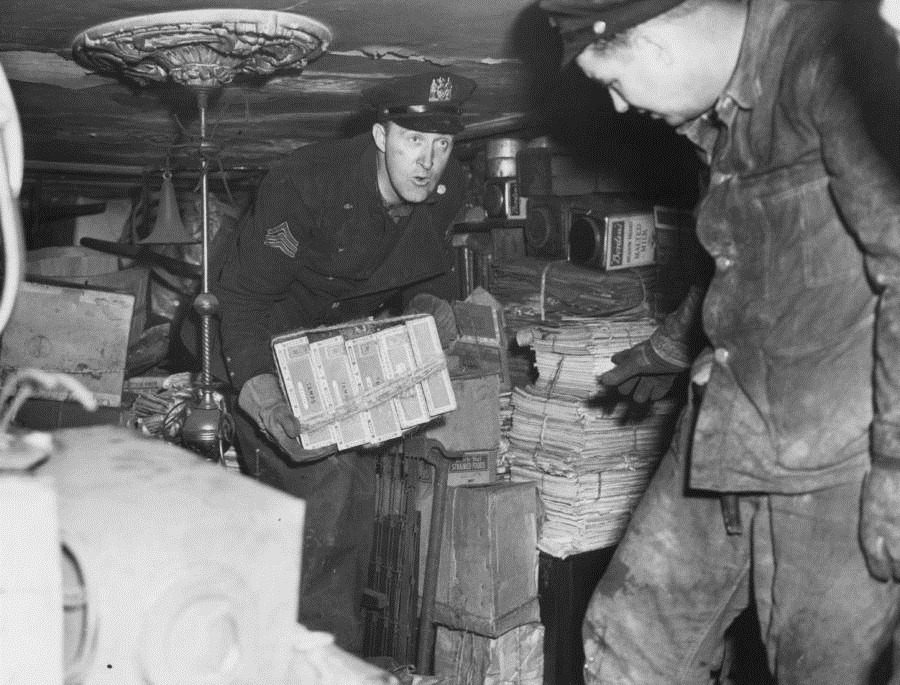 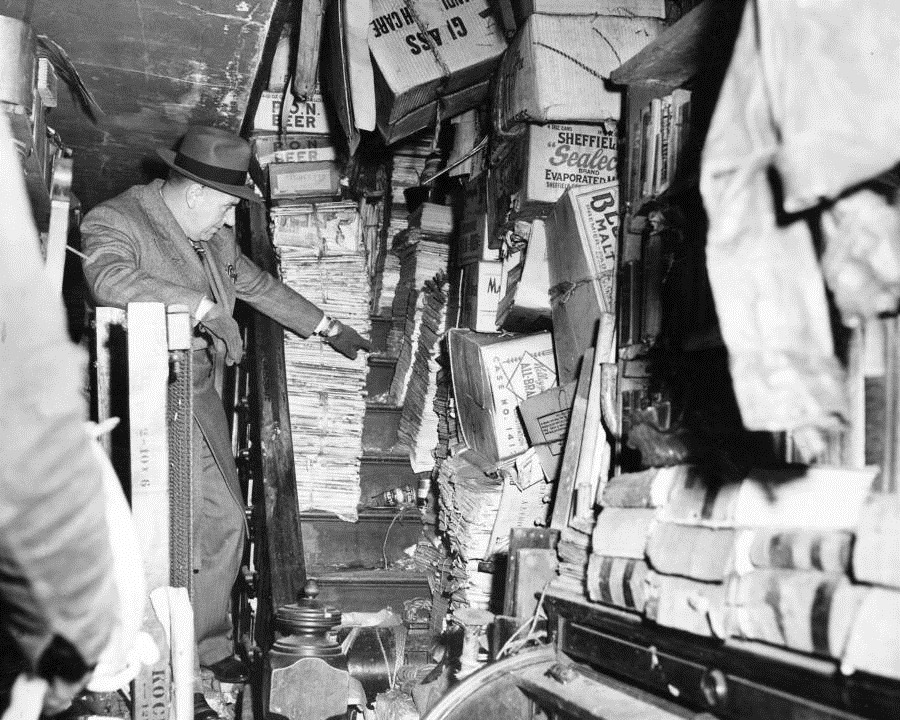 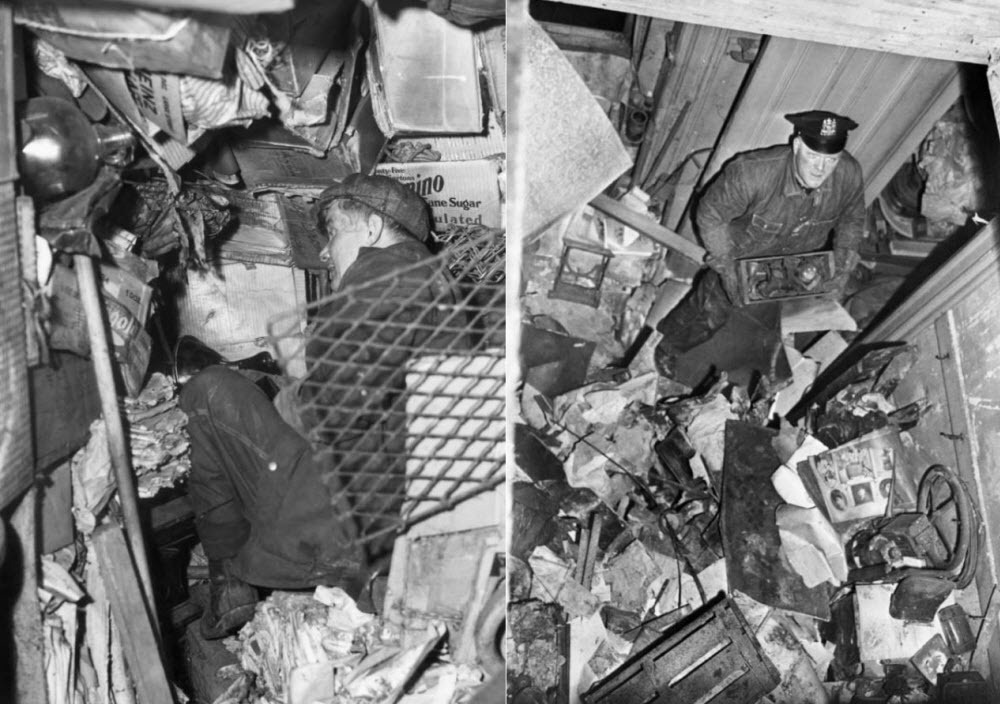 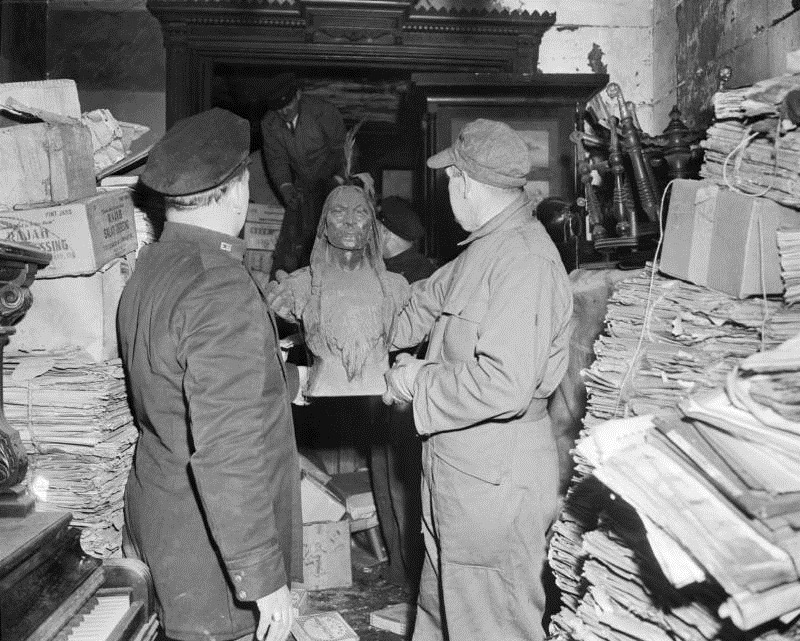 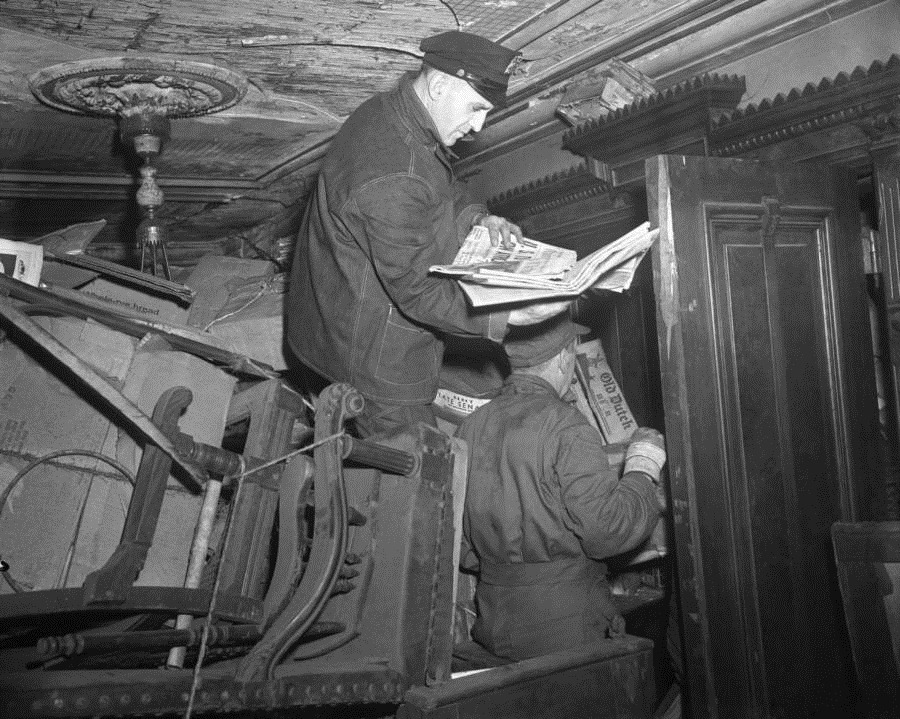 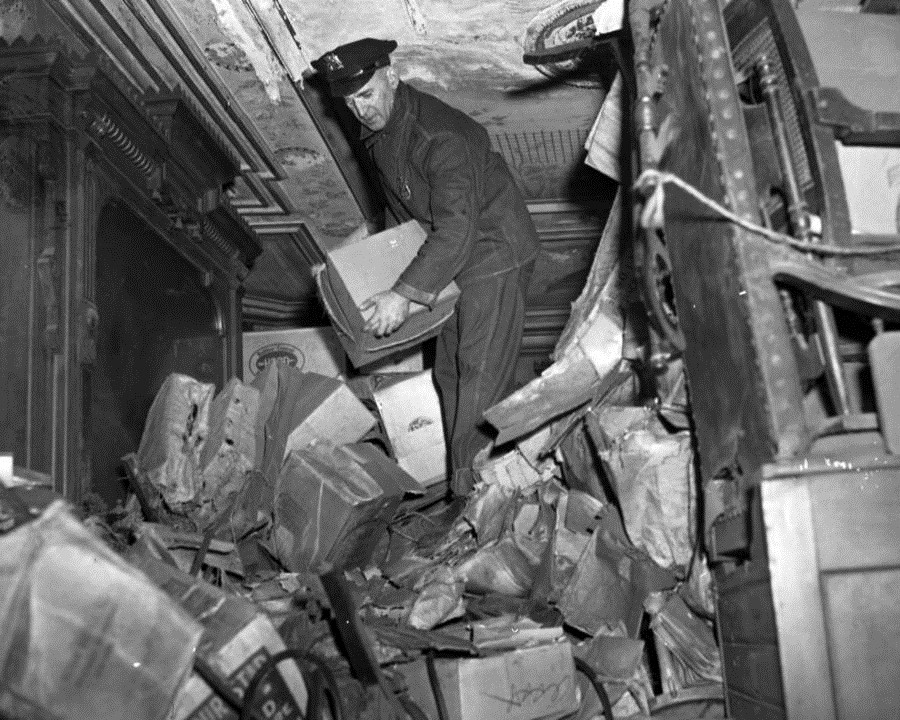 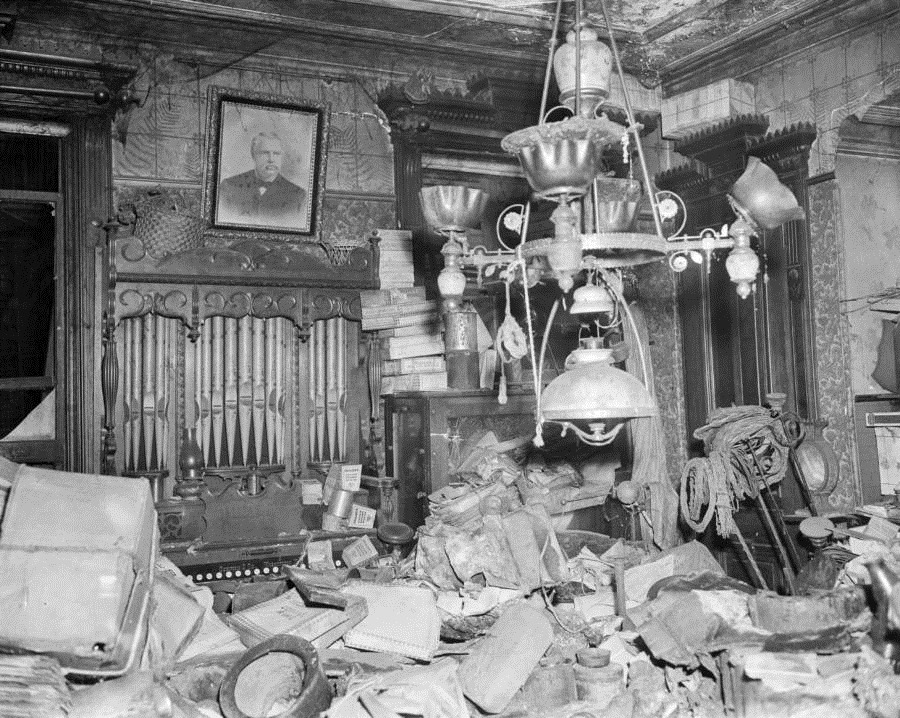 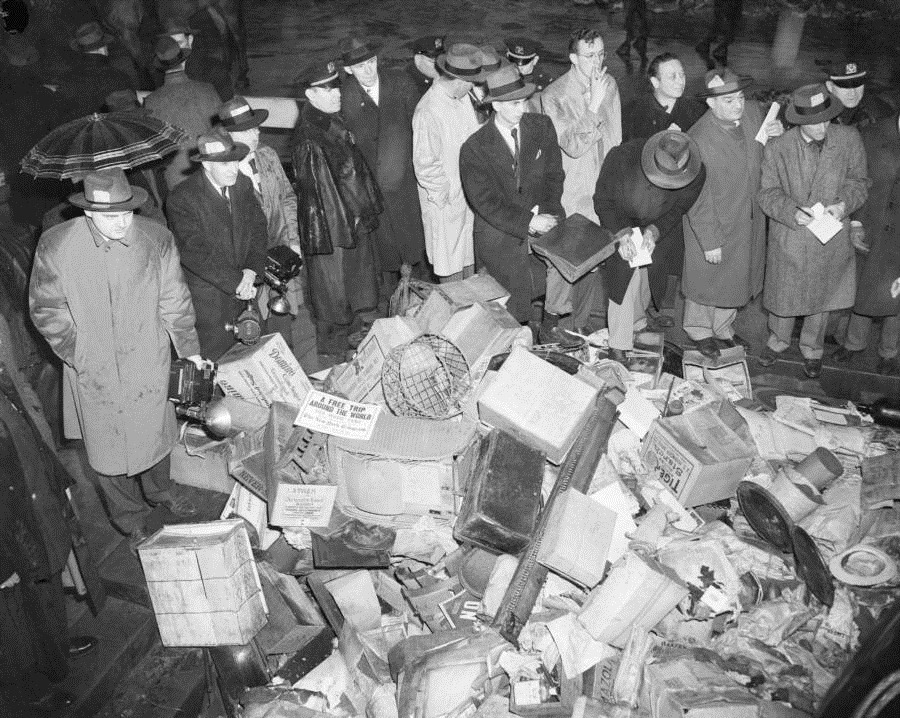