The Horseback Fishermen of Oostduinkerke

On the western end of Belgium’s short coastline, about 20 km east of Dunkirk, France, is a place called Oostduinkerke (meaning “East Dunkirk”), where a handful of fishermen practice an unusual form of fishing. Instead of using boats, these fishermen ride out to the sea on horseback.
These horseback fishermen hunt for a special variety of shrimp—the Crangon crangon, commonly known as grey shrimp, which is found in the southern North Sea, and is a delicacy in Belgium. Five centuries ago, shrimp fishing on horseback was practiced all across the North Sea coast from France to the Netherland, and even on the South of England. Today, this activity is restricted to only a few miles of the coastline in Oostduinkerke. What was once a full-time job is now just a hobby—a show put up by the last of the surviving horseback fishermen for the tourists. 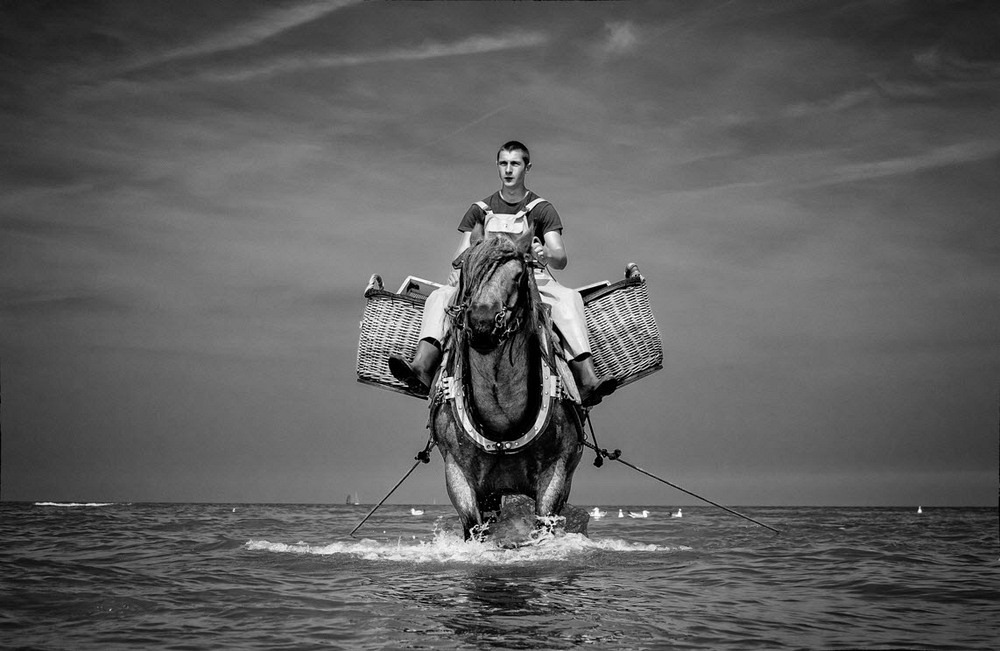 Shrimp fishing takes place during the warmer days when there is no ice at sea. Just before low tide when the sea has gone out but not completely, fishermen would mount their horses wearing bright yellow slickers and tall rubber boots, and ride parallel to the coastline dragging behind them large nets to scoop up the shrimps and other fish in the surf. Walking through the water with the sea up to their bellies dragging a net behind is an extremely strenuous activity even for the Brabant draft horses, which are known for their enormous strength. So every now and then, the fishermen and their horses will return to the shore for a quick rest. During this time, the fishermen would empty the nest, throw the crabs and other unwanted fishes back to the sea, and gather the shrimps in two baskets hung from either side of the horses.
Five hundred years ago, this was the only way to catch shrimp. But with commercialization and increased demand, fishermen started venturing further out to the sea to catch shrimps rather than wait for shrimps to come to them with the tides. Even as late as the early 20th century, shrimp fishing on horseback was a common sight along the coast of North Sea.
Now, only a dozen families in Oostduinkerke are left custodians of this indigenous culture. They are not full-time fishermen—some work construction jobs, others are farmers. Horses, fishing and the sea is only their passion. The reason why horseback fishing exists only in Oostduinkerke is mainly due to the broad beach which is without breakwater and is perfect for catching shrimp.
Horseback fishing is so rare, that UNESCO awarded it a place on their Representative List of the Intangible Cultural Heritage of Humanity. 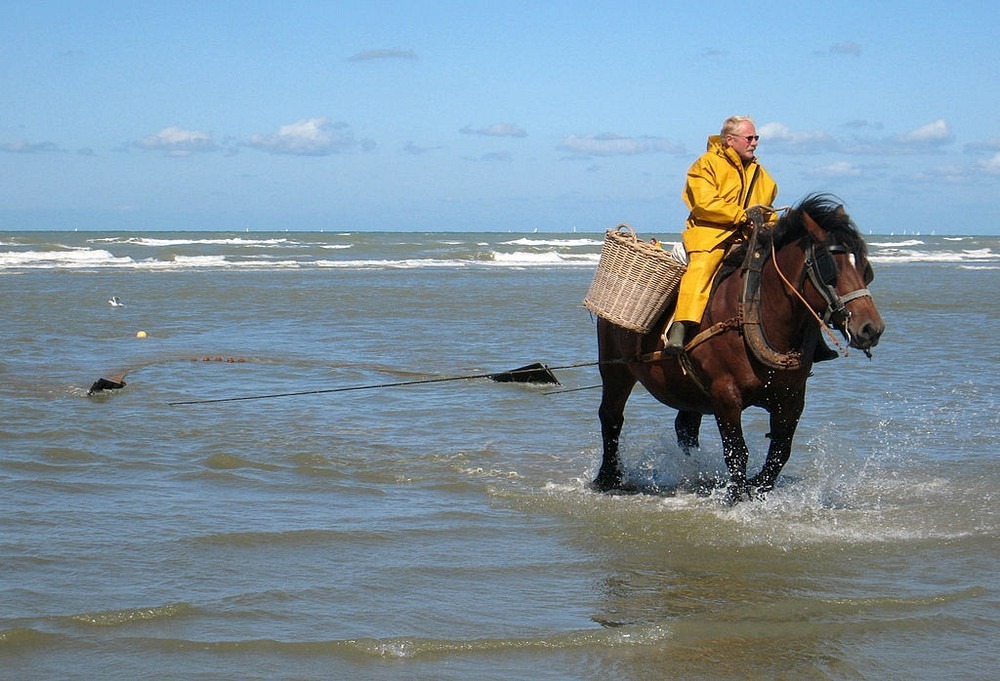 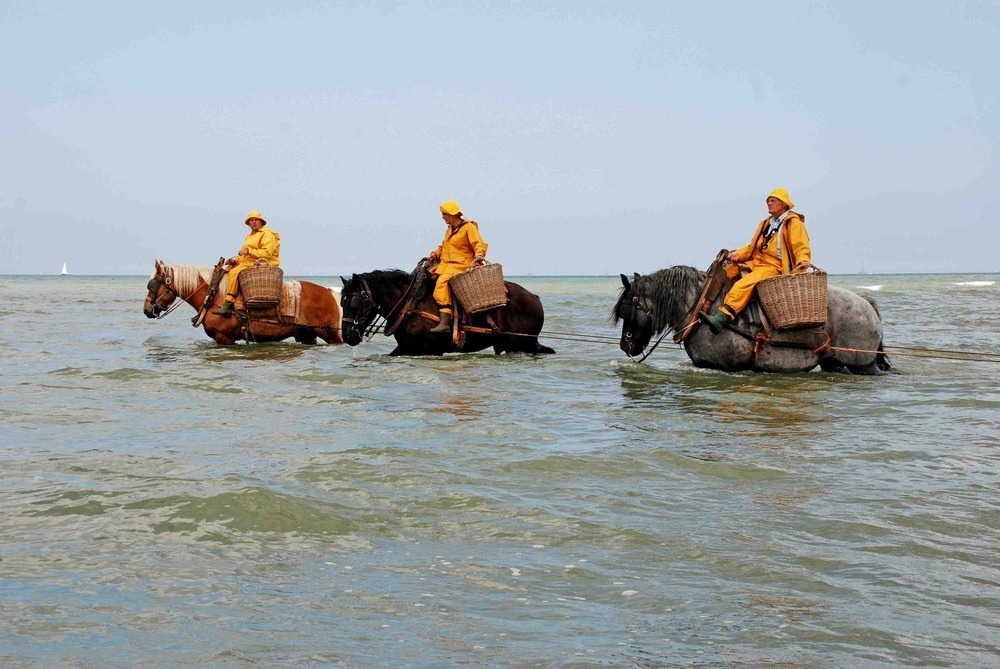 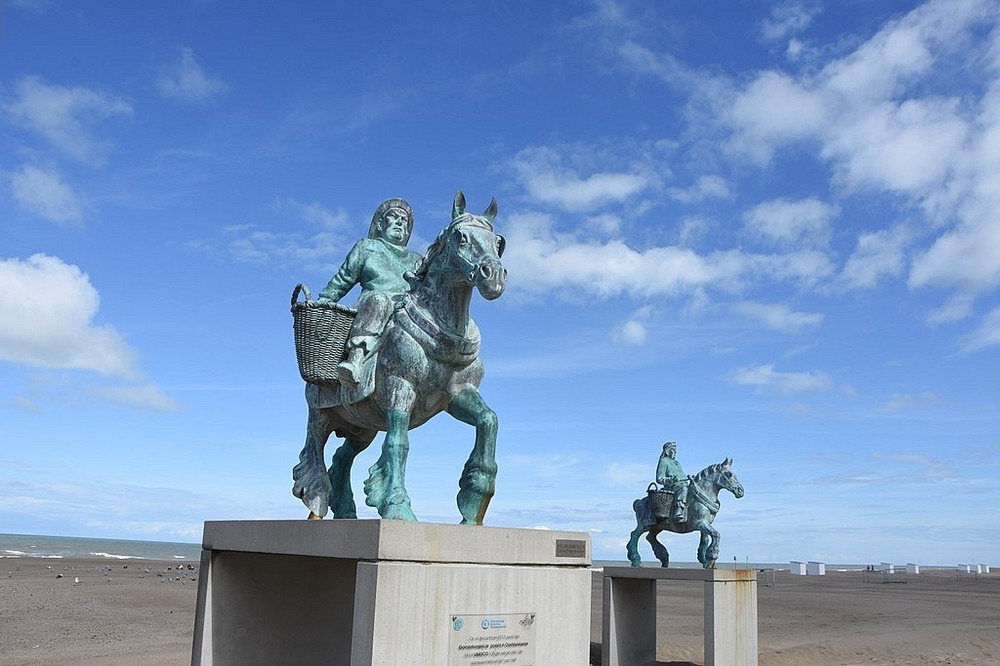 Statues of horseback fishermen in Oostduinkerke.