A small Florida town has been rocked by a shocking sex scandal involving a married sheriff's deputy who allegedly received oral sex at the wheel of his squad car from a school counselor.
Indian River County Sheriff's Deputy James Cousins, 25, was forced to resign last month over claims of his sexual encounter with married Vero Beach High School counselor Rebecca Turner, 36, after a high school football game in September.
An investigative report obtained by DailyMailTV reveals the affair came to light after rumors began to swirl around the high school after Turner got a ride home from the game 90 minutes away in Pahokee, Florida in Cousins's patrol car.
Civilians are not permitted to ride in squad cars, according to the sheriff's department regulations.
The incident, however, was not reported until November, when school officials became aware of the rumors which also included claims of nude pictures being shared between the two during work hours. 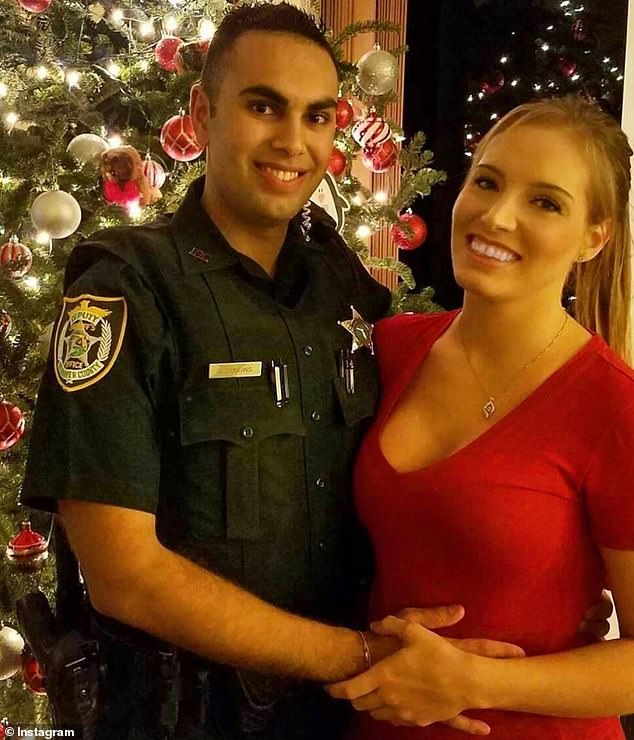 Indian River County Sheriff's Deputy James Cousins, 25, (pictured with his wife Billie, 31) was forced to resign last month over claims he received oral sex at the wheel of his police car from a married school counselor 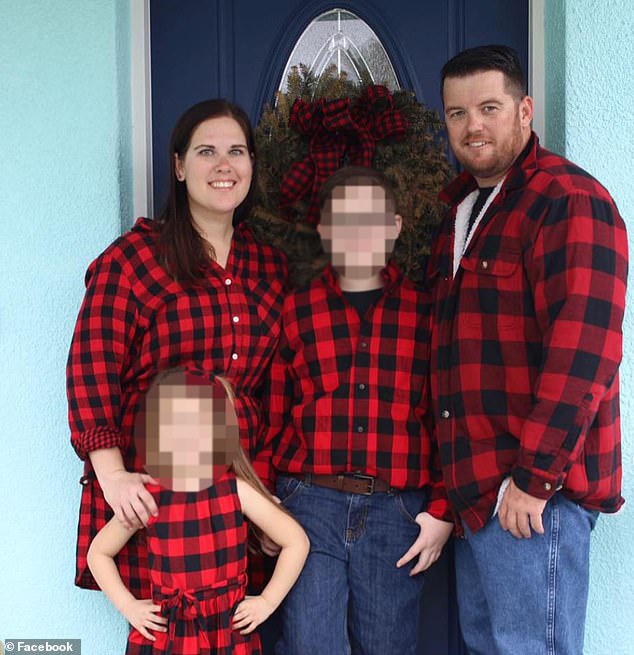 Vero Beach High School counselor and color guard coach Rebecca Turner (pictured with her husband Wade and two children) 36, came clean about the incident after she was confronted by school officials about the rumors
Cousins, who married mother-of-three Billie, 31, in a beach ceremony in Key West in July, denied the act took place while he was in uniform but admitted to receiving oral sex from Turner on a separate occasion.
The sheriff's forensics team revealed they found what appeared to be semen on the driver's seat of his marked service Dodge Charger.
Cousins has claimed the stain was from a chocolate bar that 'fell and melted.'
Sheriff officials wrote in internal agency papers obtained by DailyMailTV that Cousins could've been fired had he not resigned.
The deputy had been on the job for more than two years and had met the Turner earlier that year. He had been assigned to security at Vero Beach High School.
He was one of three deputies who escorted the team and marching band to Pahokee High School, which is located in an impoverished and violence-prone area, on September 21.
Turner, a guidance and discipline specialist for the freshmen class, was overseeing the color guard for the high school's Fighting Indians marching band that night.
The 100-student band was recently put on the map when it marched in London's New Year's Day parade earlier this month.
The mother-of-two, who has been married to Florida Fish and Wildlife Commission officer Wade Turner since 2007, has since lost her job as a color guard instructor as a result of a school investigation.
When confronted by school principals Turner confessed she performed oral sex on Cousins during the ride back to Vero Beach High, according to the report. 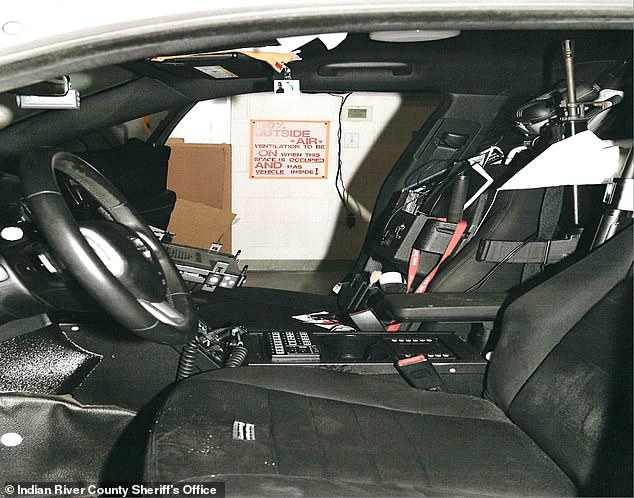 This is Deputy Cousins's patrol car, in which he allegedly received oral sex from Turner while he was driving back to Vero Beach High School after a football game at another school 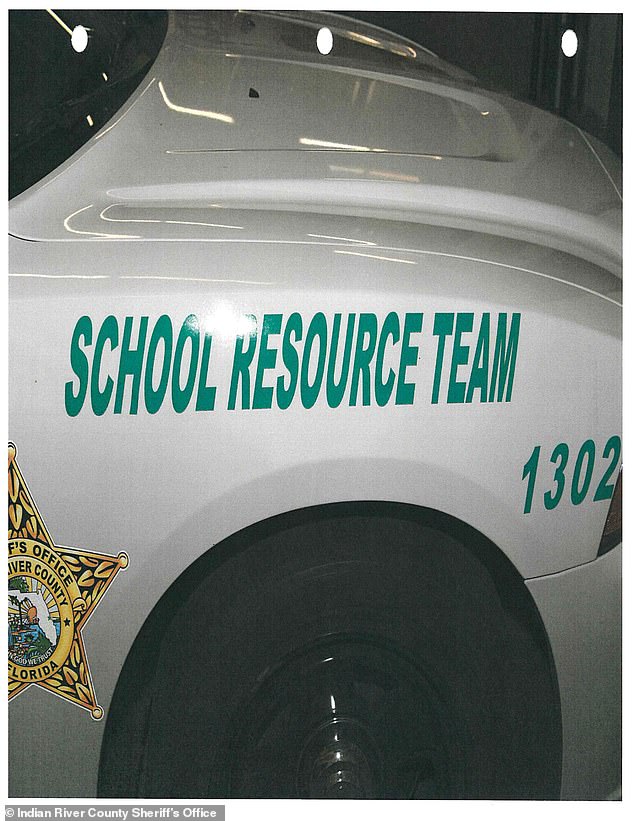 The deputy had been on the job for more than two years and had met the Turner earlier that year. He had been assigned to security at Vero Beach High School and offered Turner a ride home in the patrol car - which the Sheriff's department does not permit 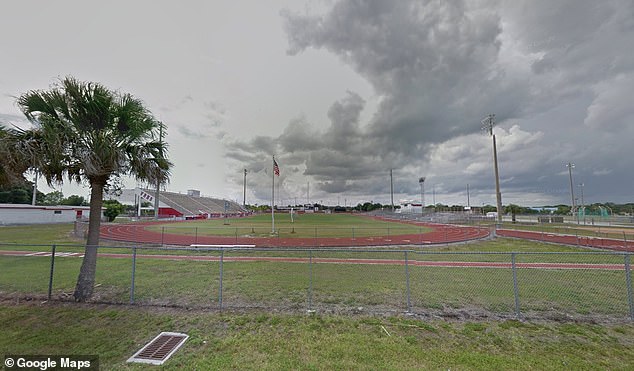 Cousins was one of three deputies who escorted the Vero High School (pictured) football team and marching band to Pahokee High School, which is located in an impoverished and violence-prone area, on September 21 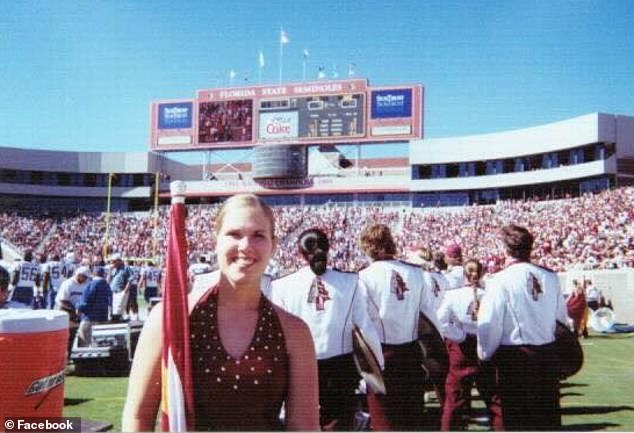 Turner (pictured as a color guard in an undated photo) worked as a guidance and discipline specialist for the freshmen class, and was also coaching the color guard for the high school's Fighting Indians marching band that night
Recorded audio testimony of Rebecca Turner
Loaded: 0%
Progress: 0%
00:00
Previous
Play
Skip
Mute
Current Time0:00
/
Duration Time0:00
Fullscreen
Principal Shawn O'Keefe told authorities Turner had been telling staff members that 'her marriage was in jeopardy' and 'was having regrets about what had happened.'
In a taped interview with investigators she is heard complaining that the incident 'sucks' and was 'a stupid mistake ruining my whole life.'
She revealed she floated the idea of sitting in Cousins's squad car after she planned to get something to eat after the football game.
'The bus that we were on was a brand-new bus,' Turner, who at times can be heard crying, told the sheriff's investigators in a recorded conversation.
She added: 'We were not allowed to eat or drink anything on there.
'So I was like hey, can I sit in your car while we stop to eat, and he said, "sure, do you want to just ride with me … the rest of the way there?"'
During ride, Turner swore under oath, she leaned over and performed oral sex on Cousins while he drove.
'It was in his patrol car,' Turner said. She also admitted she performed a similar sex act at his house three weeks later.
During the same interview, she said she she received a sexual photo from Cousins's cell phone that she believes was sent during working hours.
'His penis,' she said about the photo. 'Yeah, that is why this is ruining my freaking marriage,' she can be heard saying on the tape of her testimony.
At the end of the interview, Turner can be heard crying. 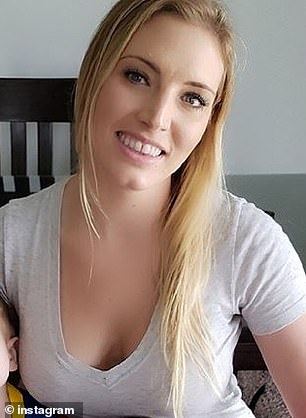 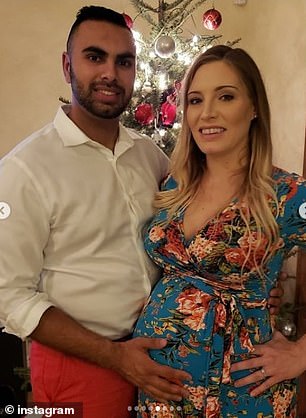 Cousins, who is married to mother-of-three Billie (pictured) 31, denied the act took place while he was working, admitted to receiving oral sex from Turner at his home three weeks later. According to Billie's Instagram page, she is expecting her fourth child 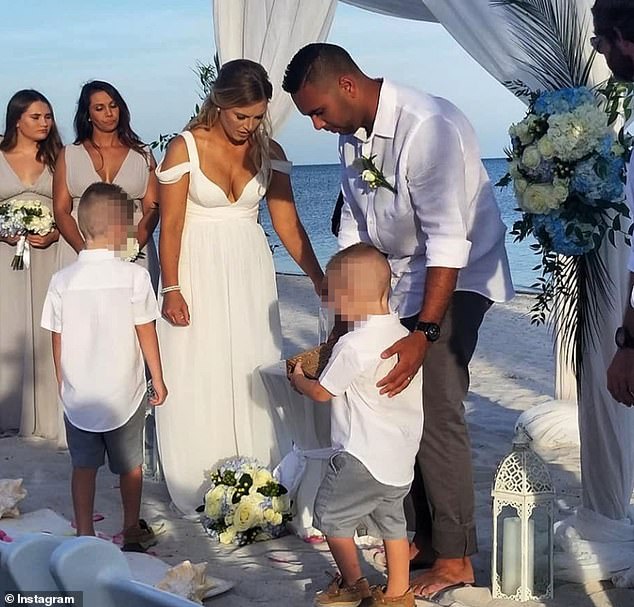 The two married in a beach ceremony in Key West in July. Cousins claims Turner showed up at his home while his wife was away on a 13-hour work shift
'It's going to be, you know, when I don't have a house or anything now because my husband is going to divorce me because this keeps coming up and up … It just sucks. The one like … the stupid mistake is ruining my whole life … my whole life pretty much.'
Turner was also asked why the deputy claimed the incident didn't take place in the car.
'I really don't know,' she said. 'I wouldn't have ruined, you know, ruining my marriage if it didn't happen and lost my job with something that I love, if it didn't happen.'
In a recorded interview with Cousins, he is heard denying the claims, despite investigators' discovery of what appeared to be a semen stain on the driver's seat of the marked service Dodge Charger.
Cousins, however, did confirm under oath that Turner performed fellatio on him three weeks later.
He told investigators she showed up at his house after school while his wife was away on a 13-hour work shift.
'I don't know if she [Turner] followed me home,' Cousins can be heard on the tape. 'But she came after school, yes sir … I don't recall how I specifically invited her.'
When asked if this was the only instance he received oral sex from Turner, Cousins responded: 'Um, hum, yes sir.'
He insisted there was no action in his squad car the day of the football game, but did admit to driving her back to the school.

Turner did not return a call and text for comment.
When contacted by DailyMail.com, Cousins, who has been looking for a job for the past two months, maintained no sex happened in the car.
'It's her word against mine, and obviously they chose hers,' he said.
'I did give her a ride, but I was ending a 20-hour work day and I was really tired. I knew I had a long ride home through the middle of nowhere and I figured she'd help keep me awake.'
As for the alleged semen on his car seat, Cousins said his forensics colleague misread the stains.
'It was Kit Kat that fell and melted,' he said.
Authorities concluded Cousins violated several policies including unbecoming conduct, intentional abuse of police equipment, as well as two counts of neglect of duty, according to an Internal Affairs investigation.
According to the case file, school officials feared the sexual act occurred in the view of students at the football game, but later concluded that the incident took place while the car was in motion on the deserted State Route 60.
Turner also admitted to the affair to her husband, who then confronted Cousins by phone.
'I did reach out to James Cousins,' Wade Turner told the sheriff's IA sleuths in a taped interview.
'And, you know, told him how I felt that he not only disrespected, you know, myself as a person, but disrespected the uniform and the brotherhood. He simply stated he was sorry and I hung up on him.'