Former Ohio gov. John Kasich stole comedian's seat on Alaska Airlines flight after refusing to be downgraded to premium economy when he was bumped out of first class to make room for a pilot

Former Ohio governor John Kasich has been shamed for stealing another passenger's first class seat on an Alaska Airlines flight after being bumped out of his own to make room for a pilot.
Kasich, 66, was flying from JFK in New York to San Francisco on January 16 - two weeks after handing over the governorship and his access to state planes to Mark DeWine - when he took comedian Julie Klausner's seat.
According to Klausner, who shared details of their run-in on Twitter and later in a podcast, Kasich had been behaving 'like an a**hole' long before they even boarded the plane and was talking obnoxiously on his cell phone in the airline's first class lounge.
He got on the plane first and, according to Klausner, was told that he could not sit in his seat because it had been given to a pilot who had been scheduled to fly at the other end of the journey at the last minute.
To make sure the pilot would get enough sleep during the 6 hour flight before he had to commandeer his own aircraft, he was given Kasich's more comfortable seat and the politician was told he would have to sit in the premium economy cabin.
He was bumped out instead of anyone else because, according to Klausner, he paid the least for his ticket. 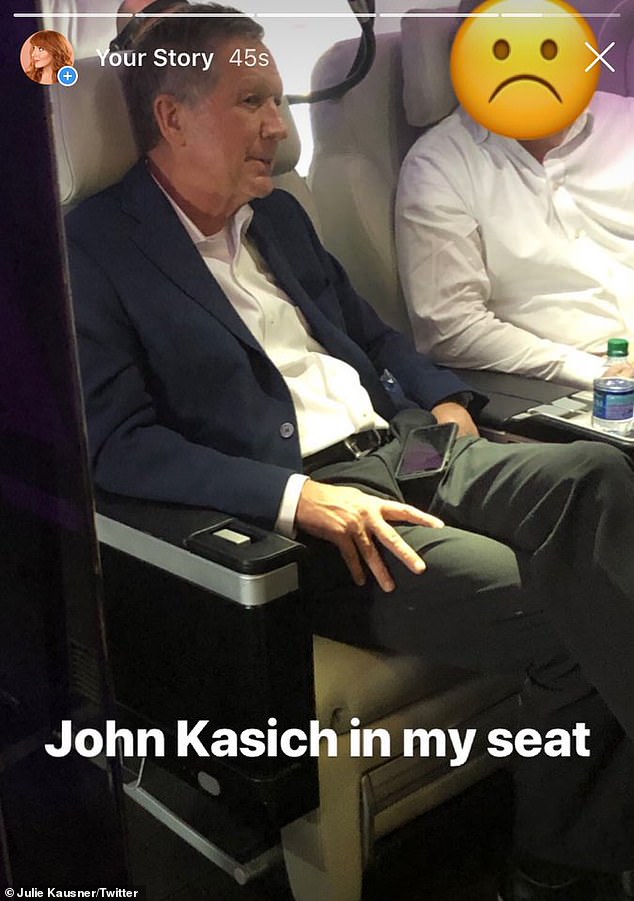 Comedian Julie Klausner uploaded this photograph of Kasich in her seat as she stood at the front of the plane, discussing with flight attendants how to proceed, on January 16. Kasich sat in it while it was empty after being kicked out of his own to make room for a pilot. He had been told to go to premium economy, according to Klausner, but refused

Klausner tweeted about the incident immediately after it happened on January 16 then discussed it on her podcast
But instead of moving down a cabin, the Republican politician moved into Klausner's seat, thinking it was empty.
He then allegedly made a phone call to a friend where he 'complained' about the pilot while he was in earshot.
By the time Klausner got on on the plane, Kasich had settled in and, she claims, did nothing as she and the airline staff stood in front of him trying to find a solution.
Unaware of who he was, Klausner offered to take a later flight because, she said, she did not want the airline staff to confront Kasich again and 'make a stink'.
'I am standing at the front and John Kasich is sitting there, either talking on his cell or on his cell phone.
'He knows I'm standing right in front of him because that's my seat. Finally a ticket agent comes on the plane and looks and sees that John Kasich is sitting there and he shook his head and he says, "This guy was downgraded and he refused to go into the seat he was newly assigned and he sat in yours and that's your seat,"" Klausner said in her podcast.
'Instead of saying, OK I'm going to go sit in 12C which has the extra legroom, she said it was premium and not economy, he got really mad and was a total d**k to the staff and sat in my seat instead.
'That is what was told to me,' she added.
The staff told her that to remain standing at the front of the plane until everyone had boarded, she said, and vowed to resolve it once the doors were closed - something she did not want to
'I pulled the flight attendant aside and I said, "Listen, I can tell this guy is an a**hole and he is going to make a stink if you make him move so if it will make things easier, I will go on a later flight,' she said.
It was only then that she texted a friend a photograph of Kasich and learned who he was, she said. 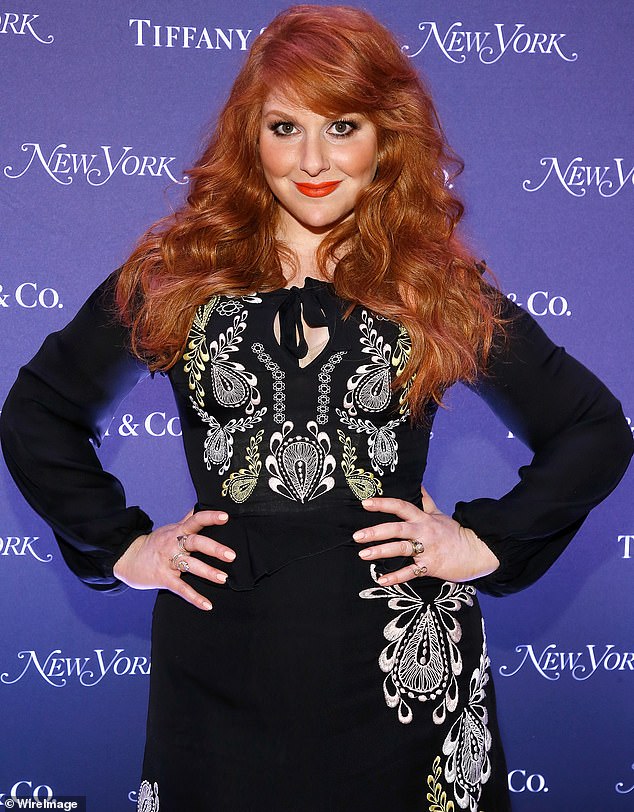 Julie Klausner, the comedian, took a later flight instead of insisting that Kasich get out her seat. She then tweeted about it and discussed the incident on her podcast

She then put a photograph of Kasich sitting in her seat on her Instagram story and promptly took to Twitter to relay the whole debacle to her fans.
Kasich, a Trump opponent and staunch pro-lifer, was served as the Governor of Ohio from 2011 until 2019.
He endorsed his replacement, Rep. Mark DeWine, last year.  Since leaving office, he has taken a position as a senior political commentator at CNN.
According to Klausner, when he was talking on the phone in the airline lounge, he said, 'loudly': 'The people at CNN were so nice.'
Speaking on her podcast, she said she assumed he was a 'douchebag businessman' who wanted people to hear that he had been at the network.
'I was in the lounge and I noticed this guy with grey hair who was just a f***** asshole. He was talking on his cell phone really loudly in the middle of the lounge and he said, "The people at CNN were so nice."
'And he said that so loudly that,"I was like I'm going to remember that." Just clocking that there's a douchebag near me,' she said. 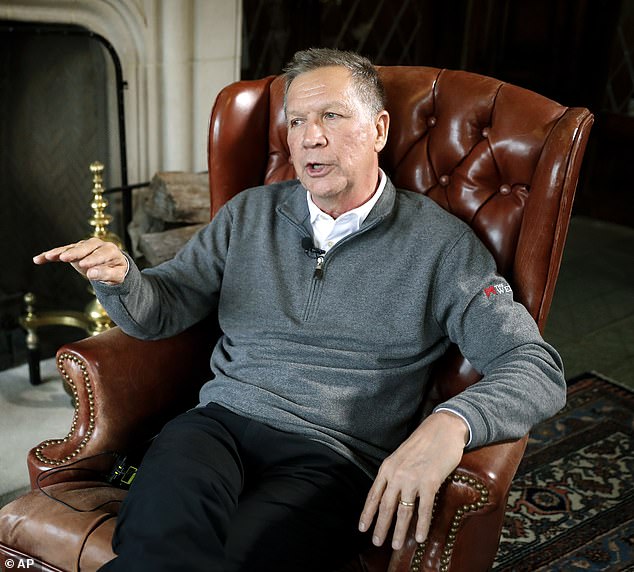 Kasich, who served two terms as the Governor of Ohio and is now a CNN senior political commentator, has not commented. The incident happened two weeks after he left office and turned over his access to state aircraft 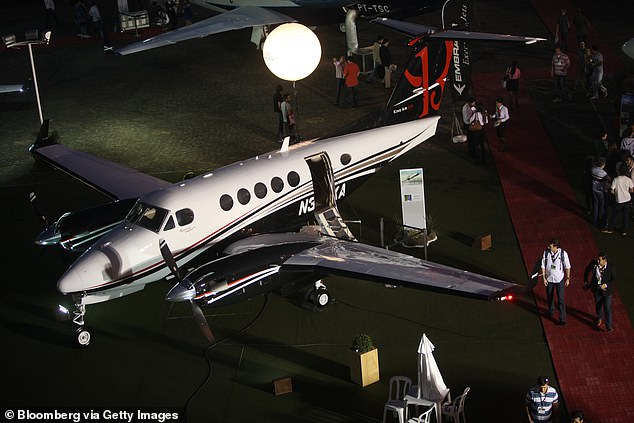 Until two weeks before the incident, Kasich had use of Ohio's state aircraft which included a Beechcraft King Air 250 (pictured)
When she got on the plane and saw him in her seat, she recognized him as 'that a**hole'.
She later described him as a 'f****** piece of s*** a**hole' and claimed the airline staff 'vented' to her for '15 minutes' about how much they hated him and people like him.
'They were basically saying, we just say that guys like this push people around and they get what they want,' she said.
Kasich, who ran against President Trump in the 2015 Republican nomination race, did not respond to DailyMail.com's inquiries on Wednesday morning and he has not commented on the incident since it happened.
An Alaska Airlines spokesman would not confirm all of the details of her account but told Cleverland.com: 'We’re very appreciative to Ms. Klausner for helping diffuse an awkward situation by voluntarily giving up her seat.
'We made sure to take care of her on another flight.'