Earth's magnetic fields are shifting - and scientists are unsure why.
Researchers say the magnetic North Pole is  'skittering' away from Canada, towards Siberia.
The problem has got so bad, researchers around the world are scrambling to update a global model of the fields.
Called the World Magnetic Model, it underlies all modern navigation, from the systems that steer ships at sea to Google Maps on smartphones. 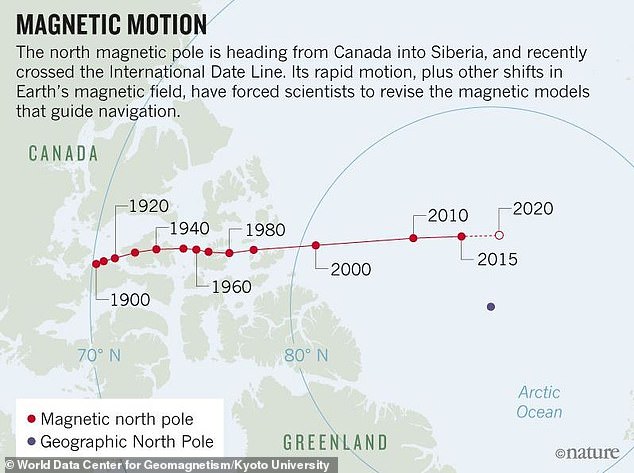 Researchers say the magnetic North Pole is 'skittering' away from Canada, towards Siberia, far more quickly that they expected it to.

WHY ARE THE EARTH'S MAGNETIC FIELDS MOVING?

The problem lies partly with the moving pole and partly with other shifts deep within the planet.
Liquid churning in Earth's core generates most of the magnetic field, which varies over time as the deep flows change.
In 2016, for instance, part of the magnetic field temporarily accelerated deep under northern South America and the eastern Pacific Ocean. Satellites such as the European Space Agency's Swarm mission tracked the shift.

The most recent version of the model came out in 2015, and it was supposed to last until 2020.
However, researchers say the  magnetic field is changing so rapidly that they have to fix the model urgently.
It was due to be updated on the 15th January, but due to the US Government shutdown, that has already been delayed until the 30th.
The magnetic field is in a permanent state of flux.
Magnetic north wanders, and every few hundred thousand years the polarity flips so that a compass would point south instead of north.
'The error is increasing all the time,' Arnaud Chulliat, a geomagnetist at the University of Colorado Boulder and the National Oceanic and Atmospheric Administration's (NOAA's) National Centers for Environmental Information, told Nature.
'In early 2018, as part of our regular assessment of the WMM, we found that the model exceeded its specification for declination only three years into the five-year WMM cycle,' he told the American Geophysical Union meeting.
'We investigated this error and tracked it down to the combined effect of a global geomagnetic acceleration pulse occurring in 2015-2016, and a fast-changing magnetic field in the North polar area.
'A remarkable manifestation of the field variation is the drift of the North magnetic pole towards Russia, which has been occurring at the unusually high speed of about 50 km per year since the beginning of the 21st century.
'On the contrary, the South magnetic pole drift is very slow (less than 10 km per year) and has not changed much over the past few decades, and hence provided a much smaller contribution to the overall model declination error.'
To fix the model, he and his colleagues fed it three years of recent data, which included a 2016 geomagnetic pulse, and he says the new model, when it is released,  should remain accurate until the next regularly scheduled update in 2020.
Satellites such as the European Space Agency's Swarm mission tracked the shift.
Phil Livermore, a geomagnetist at the University of Leeds, UK, said at the American Geophysical Union meeting 'the location of the north magnetic pole appears to be governed by two large-scale patches of magnetic field, one beneath Canada and one beneath Siberia,' Livermore says.
'The Siberian patch is winning the competition.'

WHAT IS THE WORLD MAGNETIC MODEL?

The charts, known as the World Magnetic Model (WMM), are used to convert between compass measurements of magnetic north and true north and can be found in the navigation systems of ships and airplanes as well as geological applications (such as drilling and mining).
The WMM is also part of map applications in smartphones, including the Google Maps App.
Researchers from the U.S.'s National Oceanic and Atmospheric Administration (NOAA) maintain the WMM. 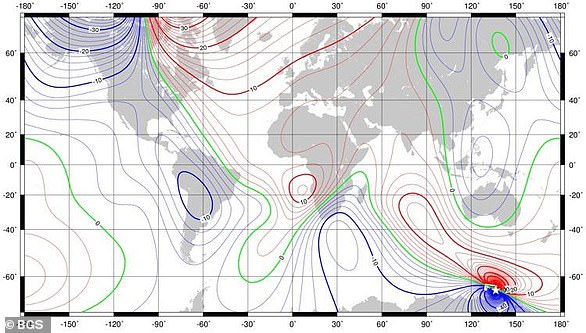 The charts, known as the World Magnetic Model (WMM), are used to convert between compass measurements of magnetic north and true north
'Although GPS is a great tool for navigation, it is limited in that it only provides your position,' geodetic scientist James Friederich from the U. S. National Geospatial-Intelligence Agency explained in 2014.
'Your orientation, the direction you are facing, comes from the magnetic field.'
'Our war fighters use magnetics to orient their maps.
'Your smartphone camera and various apps can use the magnetic field to help determine the direction you are facing,' he continued.
'All of these examples need the WMM to provide your proper orientation.'

Scientists in recent years have predicted that Earth's magnetic field could be gearing up to 'flip' – a shift in which the magnetic south pole would become magnetic north, and vice versa.
Such an event could have catastrophic effects, wreaking havoc on the electric grid and leaving life at the surface exposed to higher amounts of solar radiation.
While it's previously been thought that these reversals take place at intervals of hundreds of thousands of years, one recent study suggests it could happen in just a matter of centuries. 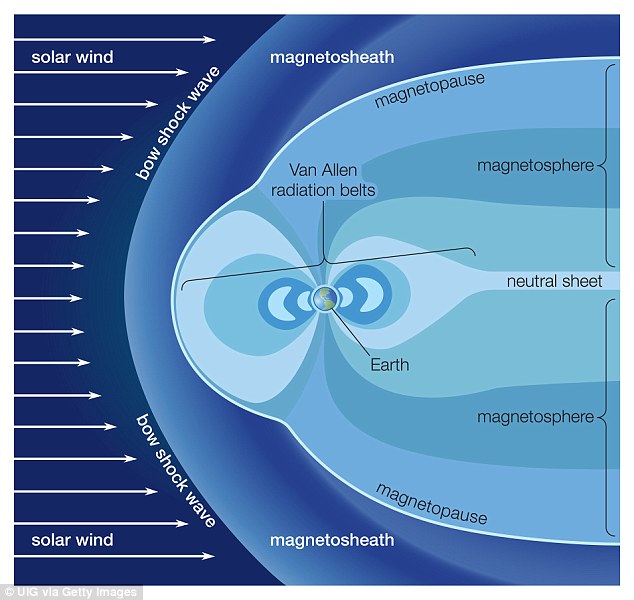 WHAT COULD HAPPEN TO EARTH IF ITS POLES FLIPPED?

The Earth’s magnetic field is in a permanent state of change.
Magnetic north drifts around and every few hundred thousand years the polarity flips so a compass would point south instead of north.
The strength of the magnetic field also constantly changes and currently it is showing signs of significant weakening.
Life has existed on the Earth for billions of years, during which there have been many reversals.
There is no obvious correlation between animal extinctions and those reversals. Likewise, reversal patterns do not have any correlation with human development and evolution.
It appears that some animals, such as whales and some birds use Earth's magnetic field for migration and direction finding.
Since geomagnetic reversal takes a number of thousands of years, they could well adapt to the changing magnetic environment or develop different methods of navigation.
Radiation at ground level would increase, however, with some estimates suggesting that overall exposure to cosmic radiation would double causing more deaths from cancer. ‘But only slightly,’ said Professor Richard Holme.
‘And much less than lying on the beach in Florida for a day. So if it happened, the protection method would probably be to wear a big floppy hat.’

The movement of the Earth's magnetic poles are shown in this animation at 10-year intervals from 1970 to 2020. The red and blue lines sjpw the difference between magnetic north and true north depending on where you are standing. On the green line, a compass would point to true north. Credit: NOAA National Centers for Environmental Information
Electric grid collapse from severe solar storms is a major risk. As the magnetic field continues to weaken, scientists are highlighting the importance off-the grid energy systems using renewable energy sources to protect the Earth against a black out.
'The very highly charged particles can have a deleterious effect on the satellites and astronauts,' added Dr Mona Kessel, a Magnetosphere discipline scientist at Nasa.
In one area, there is evidence that a flip is already occurring. ‘The increasing strength of the South Atlantic anomaly, an area of weak field over Brazil, is already a problem,’ said Professor Richard Holme.
The Earth's climate could also change. A recent Danish study has found that the earth's weather has been significantly affected by the planet's magnetic field.
They claimed that fluctuations in the number of cosmic rays hitting the atmosphere directly alter the amount of cloud covering the planet.
Henrik Svensmark, a weather scientist at the Danish National Space Centre who led the team behind the research, believes that the planet is experiencing a natural period of low cloud cover due to fewer cosmic rays entering the atmosphere.

'Earth's magnetic field, which has existed for at least 3.45 billion years, provides a shield from the direct impact of solar radiation,' said Professor Roberts from the ANU Research School of Earth Sciences.
'Even with Earth's strong magnetic field today, we're still susceptible to solar storms that can damage our electricity-based society.'
In the new study, researchers at the Australian National University analyzed the paleomagnetic record from 107,000 to 91,000 years ago by analyzing a stalagmite from a cave in southwestern China.
The team conducted magnetic analysis and radiometric dating on the meter-long sample, revealing the behaviour of the ancient magnetic field.
And, they found the magnetic field experienced a rapid shift over the span of about two centuries, decreasing in strength by about 90 percent when a field reversal occurred. 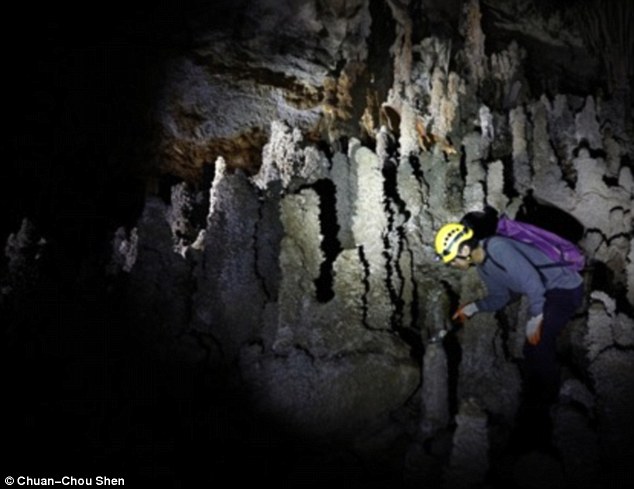 In the new study, researchers at the Australian National University analyzed the paleomagnetic record from 107,000 to 91,000 years ago by analyzing a stalagmite from a cave in southwestern China
The damage to power grids and communications systems resulting from such a flip in today's society would cause trillions of dollars in damage, the researchers explain.
'Hopefully such an event is a long way in the future and we can develop future technologies to avoid huge damage, where possible, from such events,' Professor Roberts said.
The study suggests Earth's magnetic field is a lot more unpredictable than suspected, the researchers say.


'The record provides important insights into ancient magnetic field behaviour,' Professor Roberts said, 'which has turned out to vary much more rapidly than previously thought.'