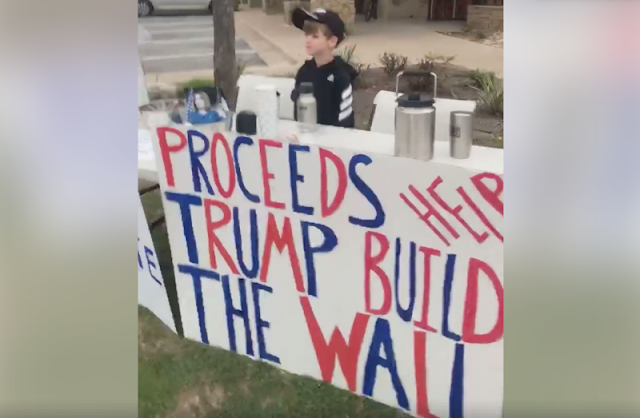 A 7-year-old from a community near Austin, Texas, has found himself going viral after photos and videos of his hot chocolate stand hit the internet. However, he isn’t your everyday child entrepreneur — the young boy is raising money to help fund President Donald Trump’s controversial border wall.
According to Jennifer Stevens, her son, Benton, was moved by Trump’s State of the Union Address and became naturally curious about the wall.
“He wanted to know about the wall so we explained what it was about and he was like, ‘I want to raise money for the wall,’” she told the Austin, Texas news station KXAN.
Both Jennifer and her husband, Shane, who did not immediately respond to Yahoo Lifestyle’s requests for comment, are members of the Republican National Convention, and they are forthcoming about sharing their political stance with their children.
“People think he’s brainwashed,” she told the news outlet. “Well, of course, he supports Trump because we do, and he hears how we talk and this and that. Call that brainwashing, but I call it parenting, because we instill our values in him.”
Benton, according to his mother, begged to set up a stand to help fundraise for the wall, and it became a family affair. His older brothers helped him make the signs, and Jennifer helped make the product. Customers were encouraged to choose a marshmallow to melt, according to a sign: “Beto marshmellows [sic],” mini-sized, were free, while large “Pelosi marshmellows [sic]” cost an extra 50 cents.

However, Benton’s stand, set up outside a Steiner Ranch strip mall, was short-lived. “I guess some liberals — or whatever you want to call them — they were griping at the owner [of the store] and going in and yelling at him and slamming him on Facebook.” Her husband decided to shut down the stand after one hour. He was successful in raising $231.
Some people were vocal about the parents “using” their son to make a political statement, and Jennifer alleges that someone even called him a “little Hitler.” “A guy pointed at him in his car and then he said that we didn’t like brown people. I don’t understand that at all,” she said.
Still, it seems that Benton has plenty of supporters. Including his sales profit and additional donations to his cause via Venmo, Benton has raised around $1,400.
“We’re going to get it into the wall,” Jennifer said. “There’s a GoFundMe page and we’re also part of the RNC and we’re pretty connected there so we will 100 percent make sure it goes towards the wall.”
It is, however, challenging to ensure donated funds go toward a particular project, Business Insider reports. Donations go into a fund called “Gifts to the United States,” but there is no guarantee the money would be distributed to a specific project — in this case, the border wall — and donating to the Department of Homeland Security requires Congressional approval.