America's opioid epidemic is moving east - from the rural, white Midwest to urban black communities where fentanyl overdoses are soaring

The opioid epidemic seems to be moving, geographically, spreading from the poor, rural Rust Belt to the East Coast.
Overdose deaths, particularly those from synthetic opioids, have increased especially sharply in the eastern US.
The number of people who died due to opioids at least doubled every three years between 1999 and 2016 in eight states: Connecticut, Illinois, Indiana Massachusetts, Maryland, Maine, New Hampshire and Ohio.
As the opioid crisis has stretched on, its public health identity has been as a white, poor, Midwestern problem, but new Stanford University research suggests that efforts to limit fentanyl overdoses in the east need to be re-doubled. 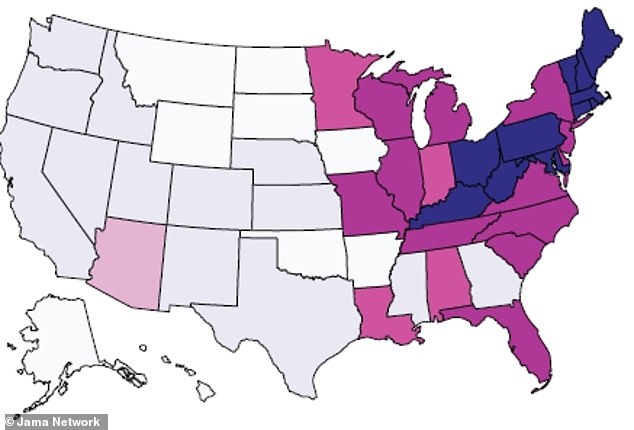 Though it the opioid epidemic in the US has been stereotyped a poor, white, Midwestern problem, its most recent fentanyl-driven wave is causing the sharpest, fastest increases in overdose deaths in urban, black populations in Appalachia and the Northeast shown on a map from a new Stanford University study in deep purple
Between 1999 and 2016, a staggering 351,630 Americans died of opioid-related causes.
Those numbers have only increased year-over-year, primarily claiming young lives - the average age of the deceased was just 40 - and driving down overall life expectancy.
And the average victim has been stereotyped as Midwestern, white, male and poor.
By most prior estimates, that area of the country experienced the sharpest rise in opioid overdoses.
Between July 2016 and July 2017, overdoses increased by 30 percent in the vast majority of US states (45), according to the National Institutes of Health (NIH).
In the Midwest, on the other hand, overdoses shot up by 70 percent during the same period.
But according to the new study, published Friday in JAMA Open Network, the epidemic is spreading east, driven very clearly by synthetic opioids, especially fentanyl.
Opioid deaths on the whole rose with moderate speed and intensity between 1999 and 2016 in many states east of the Mississippi River.
But the risk of death is perhaps highest to opioid users who unexpectedly use or get hooked on fentanyl, the sythetic opioid that can be between 80- to 100-times more powerful than heroin.
Increases in deaths involving synthetic opioids were not only sharp in number but rapid in their rise in recent years in nearly every state east of the Mississippi.
And the very sharpest increases were seen in the Appalachian and adjacent states of Kentucky, Ohio, West Virginia Pennsylvania and Maryland.
Death rates from synthetic opioids increased by at lest 41 percent each year, as did fatalities in the Northeast-most states of the country: Maine, New Hampshire, Vermont, Massachusetts, Rhode Island and Connecticut.
'Although opioid-related mortality has increased steadily and exponentially since 1999, the types of opioids involved, and the places and people most affected, have changed over time,' the study authors wrote.
'Opioid-related deaths were previously thought to be concentrated in the white population, in the Appalachian and midwestern states.'
But, as if the epidemic is coming full circle to the much-overlooked heroin addiction epidemic of the 1970s, today's opioids are increasingly killing black men and women in urban areas.
'Specifically, research suggests the opioid epidemic has evolved as a series of 3 intertwined but distinct epidemics,or waves, based on the types of opioids associated with mortality,' moving from prescription opioids overdoses, to heroin deaths to, now, fentanyl and synthetic opioid deaths, the study revealed.
'The evolution has also seen a wider range of populations being affected, with the spread of the epidemic from rural to urban areas and considerable increases in opioid-related mortality observed in the black population.'
This means that the wider distribution of naloxone that we have seen in the Midwest  needs to be adopted and focused on black, inner-city communities in East Coast cities, which are quickly becoming the new 'hot spots.'