Arizona Democrats want to get rid of ‘In God We Trust’ license plates, claim they fund ‘hate group’ 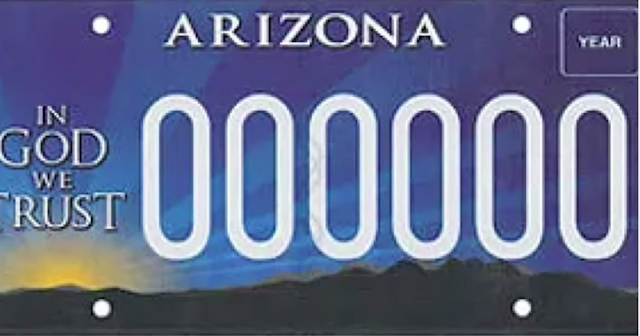 Arizona Democrats want to get rid of "In God We Trust" license plates, which they claim supports a conservative "hate group," the Arizona Republic reported.
A portion of the proceeds from the specialty plate goes to the Scottsdale-based Alliance Defending Freedom group, which the Southern Poverty Law Center designated as a "hate group" because it doesn't support same-sex marriages. ADF's mission is "to keep the doors open for the Gospel by advocating for religious liberty, the sanctity of life, and marriage and family."
State Sen. Juan Mendez (D) proposed legislation that would prevent the state's department of transportation from selling the plates.

"State dollars should not be funding an organization that works to strip residents of our state of their human rights and human dignity," Mendez told the newspaper. "It's appalling that we've already sent over a million dollars to this extremist hate group."
ADF has received $900,000 in proceeds from the sale of the license plates since 2014, the Republic confirmed with the transportation department.

"We were appalled by it," said Tory Roberg, director of government affairs for the Secular Coalition for Arizona. "People really need to know where their money is going."
The plates help promote the national motto, First Amendment rights, and the heritage of state and nation, according to ADOT's website.

What did ADF say?

Senior Vice President of U.S. Legal Division Kristen Waggoner defended the group's mission in a statement published on the group's website.
"It's disappointing to see elected officials become uncritical pawns in these ugly propaganda campaigns," Waggoner said.
Jeremy Tedesco, senior counsel for ADF, told the Republic that the state hasn't violated any laws with the plates.
"Arizona is well within its rights to offer its citizens an opportunity to voluntarily purchase license plates affirming the First Amendment and contributing to ADF's work on behalf of the freedom of all Americans to live and work according to their beliefs," Tedesco said.

ADOT contributes $17 of the $25 purchase price of specialty plates to various causes and groups, according to the report.
Mendez proposed a second bill that would require more transparency by the transportation department about the groups receiving proceeds from specialty plates.