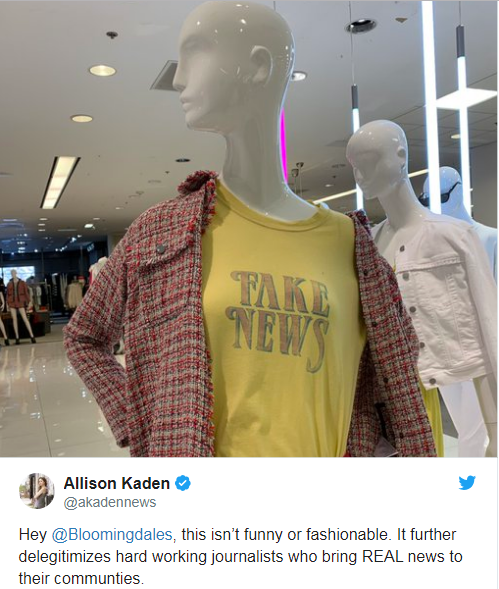 Legendary department store Bloomingdales has been forced to apologize and pull a T-shirt with the words "fake news" emblazoned on it, after the top triggered a number of journalists.

Allison Kaden, a reporter with a local news outlet in New York, snapped a photo of a mannequin wearing the offending shirt while inside a Bloomingdales store over the weekend, and she was immediately and irreparably scandalized.
"Hey @Bloomingdales," Kaden wrote in a tweet that has since gone viral. "[T]his isn’t funny or fashionable. It further delegitimizes hard working journalists who bring REAL news to their communties." 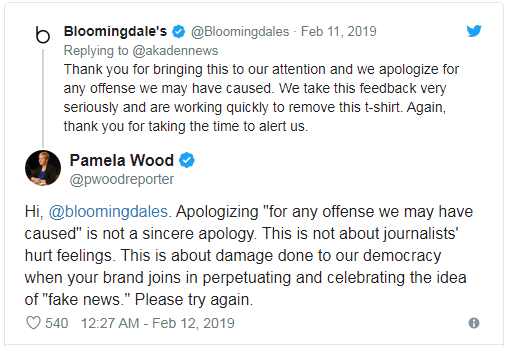 Other journalists, outraged that a department store would dare to sell a shirt ostensibly questioning the seriousness of their chosen field, joined in, demanding that Bloomingdales cease selling the offending shirt, lest the American public's trust in the media be further eroded. It did not dawn on them, apparently, that complaining about a simple T-shirt might demonstrate a certain lack of confidence.
Bloomingdales immediately apologized in a statement also posted to Twitter, according to The Wrap.
“Thank you for bringing this to our attention and we apologize for any offense we may have caused,” the company said. “We take this feedback very seriously and are working quickly to remove this t-shirt. Again, thank you for taking the time to alert us.”
A spokesperson for Bloomingdales confirmed to Fox News that the shirt "was immediately removed from our selling floor and we apologize to anyone who found this t-shirt distressing."
That was not satisfactory for other very serious reports, who excoriated Bloomingdales for not considering the long-term damage the department store has now done to the entire illustrious field of journalism.
"Hi, @bloomingdales," Maryland reporter Pamela Wood tweeted back at the brand. "Apologizing "for any offense we may have caused" is not a sincere apology. This is not about journalists' hurt feelings. This is about damage done to our democracy when your brand joins in perpetuating and celebrating the idea of 'fake news.' Please try again."
The "fake news" shirt is, of course, only the latest in a line of "offensive" and "problematic" products pulled from store shelves in recent months.
Last week, Gucci was forced to pull a $900 black turtleneck from its winter offerings after social media users pointed out that a feature of the sweater — a neck that could be rolled up to reveal a pair of red lips that fit over the wearer's lips — made the sweater a "blackface" costume. Prada pulled a number of purse accessories after visitors to the luxury brand's boutiques complained that they resembled racist caricatures. And on Monday, musician and fashion designer Katy Perry was forced to pull a pair of shoes from her spring/summer collection because Twitter pointed out the mule, which featured a creepy face, also resembled a racist stereotype.
Unfortunately for journalists concerned with preserving the sanctity of their craft, Bloomingdales isn't the only place where interested consumers can buy "fake news" shirts.