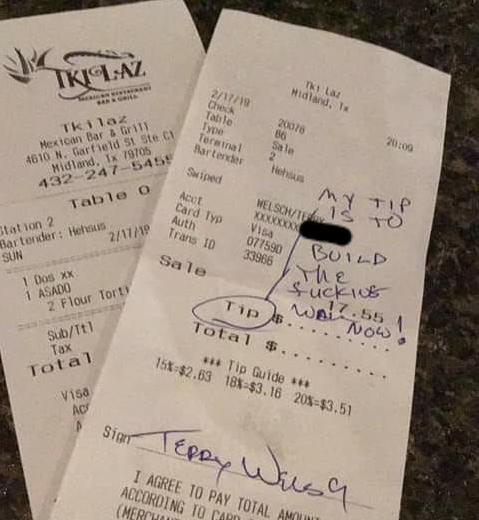 A customer at a Mexican restaurant allegedly left a rude “gratuity” on a bill, writing, “My tip is to build the f***ing wall now!”
Hehsus Baeza, a bartender at Tkilaz Mexican Restaurant Bar and Grill in Midland, Texas, posted an image of the $17.55 bill on his personal Facebook page on Feb. 18. “F*** you, Terry Welsch!” wrote Baeza. “How are you going to come eat a plate of asado and drink a dosxx and write this! #hypocrite.”
The customer’s message spoke to President Trump‘s controversial plan to build a wall along the U.S.-Mexico border; on Friday, Trump declared a national emergency to get funding for the wall. This week, 16 states filed a lawsuit against the president, reports the Associated Press, calling the declaration unconstitutional.
Baeza told the Midland Reporter-Telegram, “I’m still taken aback by all this. I didn’t expect this kind of reaction [from a customer].” Baeza did not reply to Yahoo Lifestyle when contacted for comment.
Some Facebookers commented that they didn’t believe Baeza, recalling a news story from July about a Texas waiter named Khalil Cavil of Saltgrass Steak House in Odessa, who confessed to fabricating the message, “We don’t tip terrorist” on a bill. “I did write it,” Cavil told the Odessa American. “I don’t have an explanation. I made a mistake. There is no excuse for what I did.”
A man wrote to Baeza, “Hey bro, I can assure you, most of us Trump supporters are not like this guy. We love Hispanics. We also want secure borders. I apologize for this man and his conduct. It is not acceptable.”
Baeza wrote that he had searched for the customer’s Facebook page but couldn’t find it. “He’s racist,” he commented subsequently.
Another restaurant worker commented on the post that she had once received a bill with a $6 tip and the mantra, “Build the wall!” written on the receipt. Baeza responded, “Lol, at least you got a tip boo.”