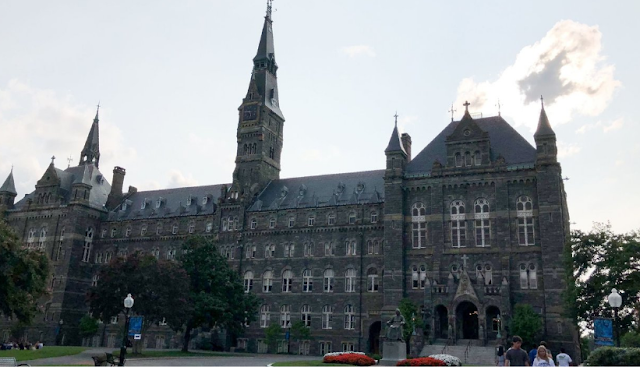 Students at Georgetown University in Washington, D.C., may find themselves paying reparations for the slaves that were sold by the Catholic institution in the 1830s, the College Fix reported.

The student Senate recently authorized a campuswide referendum to vote on whether or not to create a fund that would benefit the descendants of the 272 men, women, and children who were sold in 1838 to pay off the school's debts. The vote was approved 20-4.

"The proceeds of the GU272 Reconciliation Contributions will be allocated for charitable purposes directly benefiting the descendants of the GU272 and other persons once enslaved by the Maryland Jesuits — with special consideration given to causes and proposals directly benefiting those descendants still residing in proud and underprivileged communities," the resolution states, according to the College Fix.
Students will vote on the proposal in April. If approved, a semester fee of $27.20 would be collected from students beginning in the fall 2020. The fee would not apply to students who receive financial aid, according to The Hoya.

Why did opponents say?

Some students who oppose the referendum don't believe it's the students' responsibility to reconcile the past actions of the university.

"It's manifestly Georgetown University's obligation to make financial commitments regarding its legacy with slavery, not students'," Senator Evan Farrara said during the meeting, according to the Hoya. "Additionally, student money should only be used towards students' purposes, even if non-student purposes are meaningful, as in today's referendum."

What did the university say?

The university also plans to create a memorial as part of its reconciliation process, university spokesman Matt Hill said in a statement to the College Fix:

The Descendant Community, the Society of Jesus, and Georgetown are engaged in a facilitated dialogue with the goal of reconciliation and transformation regarding the legacy of slavery. The process is anchored in the practice of trust-building, truth-telling, racial healing, and transformation. This dialogue will guide our long term work together, which will include creating a memorial and implementing other recommendations from the Working Group as well as new ideas emanating from the dialogue in collaboration with Descendants.

We appreciate the engagement and support of students and GUSA and will continue to consult with students and other members of the university community as we work in partnership with Descendants on a process that recognizes the terrible legacy of slavery and promotes racial justice in southern Louisiana, southern Maryland and throughout the nation.

In recent years, the school has worked to make amends for its legacy of slavery. It offered an official apology for the school's actions in April 2017.
The university also renamed two of the school's buildings, which were named after the Jesuits involved in the sale of the slaves.

One of the buildings is named for Isaac Hawkins, the first enslaved person listed on the document.

The other one was named after Anne Marie Becraft, "a free woman of color who established a school in the town of Georgetown for black girls," according to the school's website.