'Hand Jobs' salon is causing controversy for its suggestive name 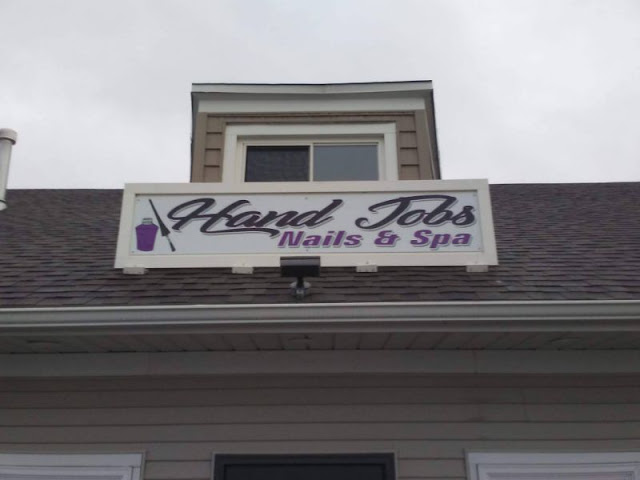 Dawn Moon has spent the last decade dreaming of opening her own salon after getting licensed as a nail technician. But just as her dream is starting to come true, Moon’s storefront in Sandusky, Ohio is causing some controversy because of its suggestive name — Hand Jobs Nails & Spa.
“This is an idea I’ve had for 10 years!” Moon tells Yahoo Lifestyle of the name of her salon. “It’s a play on words, but really is exactly what we do as nail techs…HANDS!”
Although Moon believes that the name of the salon is rather logical, others have had mixed opinions, which they’ve shared on social media.
“What the hell are people thinking,” one person wrote, while another said, “Take it down I cannot believe Perkins allowed you to use that name. Offensive!”
All of the attention, however, is simply being viewed as free advertising by the owner and the many people who support her.
“The talk about the sign started almost immediately! Within 24 hours we had massive social media attention,” she says. “Honestly, we have had way more positive feedback and a ton of support, and very few who don’t love it.”
The reaction from those who are fans of the idea include a number of other local businesses who have openly shared their support for Moon in response to a Facebook post asking if people are offended. Still, the town has yet to approve the salon’s signage because of Moon’s failure to submit a request for a sign permit. Until she does, the town can’t review or comment on the proposed name.
When asked if Moon has a plan B if it’s rejected, she says, “Of course, although we aren’t speaking on that at the moment.”
In the meantime, Moon is still fulfilling requests for merchandise, after a few people have suggested making shirts with the salon’s name on them.
“We are in the process of making the design now,” she says.