Major college to create process for changing names of buildings, monuments that 'may cause pain' 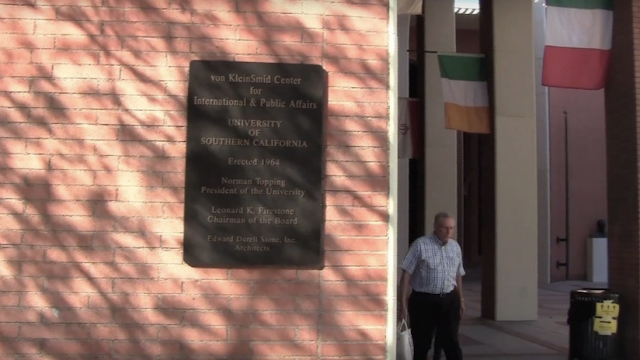 The University of Southern California is creating a Task Force on University Nomenclature that will define principles and processes for faculty, staff, and students who want to change the names of campus buildings, monuments, and symbols that "may cause pain," the Daily Trojan reported.

Provost Michael Quick sent a memo Monday to the USC community noting that "we are having important conversations about the names of certain buildings, monuments, and symbols" and that "many of these from our past may evoke views and practices that we no longer support and may cause pain for members of our community."
"As we strive to be a national leader in equity and inclusion," Quick added, "we must ensure that we uphold our own values and create a safe, welcoming, and supportive campus."

With that, Quick announced the creation of the Task Force on University Nomenclature, which will be chaired by Paula Cannon, professor of molecular microbiology and former president of the Academic Senate, and Ainsley Carry, vice president of Student Affairs, the paper said.

'This has been part of a national movement'

Carry told the Daily Trojan that USC is following a larger nationwide push.
"This has been part of a national movement … for a number of institutions like ourselves, including Michigan, Yale, Princeton, Harvard and Stanford," Carry told the paper. "They have done exactly what we are getting ready to do … through whatever [ways] it came to their attention … so university's [sic] had to create a process to interrogate this."

More from the Daily Trojan:

Many students and organizations have called on the University to change the name of Von KleinSmid Center — a building named after USC's fifth president, Rufus B. Von KleinSmid, an active member of the eugenics movement who advocated for forced sterilization practices.

"Let me emphasize, this task force will not end in a result," Carry added to the paper. "There will not be any specific name changes as a result of this task force, but what will be crystal clear is a step by step sequence of how members in our community … can submit a request for that level of interrogation."

'Tough conversations must be had'

"Tough conversations must be had on the impact of the various monuments and symbols that we administer across campus, but the work cannot stop at mere conversations," Ebadi wrote in an email to the paper. "A mission statement praising equity and diversity ultimately loses its value if an administration cannot effectively implement action to change its own harmful practices."

Ebadi added to the Daily Trojan that she hopes the task force also will discuss USC's historical injustices.

"This task force must embody a progressive mission to shed light on USC's … cultural hegemony that continue to harm our marginalized student communities," Ebadi told the paper. "New naming policies must be developed to address these inequities alongside formative solutions and help guide the University into an age of true commitment to diversity and inclusion."