'My parents taught me to work': Enterprising teen rakes in $35k in just FOUR DAYS plowing driveways in Seattle's heaviest snowfall in 70 years - and he'll donate 20 per cent to church

An Idaho teenager has been hailed a 'smart kid' who has a 'bright future' after raking in a whopping $35,000 in just four days for plowing driveways in Seattle.
And kindhearted David Holsten now plans to donate 20 per cent of his earning to charity.
The 18-year-old was in Washington state visiting his mother in hospital after surgery when a friend advised him to put and advert out on Craigslist for his landscaping services.
During February the city had received its heaviest snowfall in 70 years with up to 10 inches in some places.
CNN Privacy Policy
When he received a flurry of interest from people online willing to give as much as $1,000, the Holston returned home and lugged his equipment with him in his Dodge Ram from Coeur d'Alene in northern Idaho.
It was timed perfectly for his mother who was set to celebrate her birthday from the UW Medical Center. After seeing her again he took the opportunity to earn tens of thousands of dollars.
'I hit the road with jobs lined up until midnight. All during that time, I was answering my phone and adding new customers to my snow route for Monday,' Holston told CNN.
He worked across 15 sites to clear the way for people's cars last week. Some of the businesses who required his services were Amazon, Walgreens, a motel, Honda dealership, and a daycare. 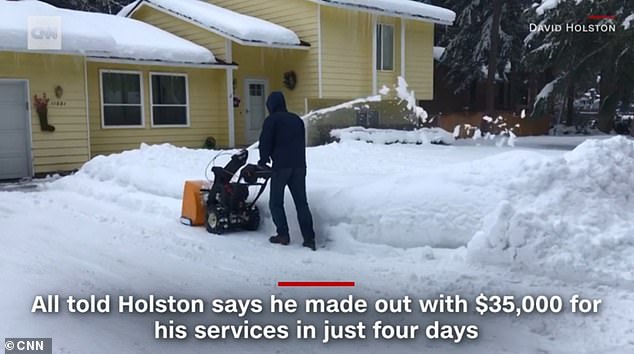 +2
David Holsten, 18, put an ad on Craigslist for his Seattle snow plowing services last week, charged between $500 and $750 per hour, and earned $35,000 in total
Shifting snow can cost $110 per hour and in times of high demand some plowers charge $400.
Holston – who mows lawns during the summer and earns a yearly salary of about $30,000 - said he was accepting jobs for $500 and $750 an hour in places.
The business owner was working 12-hour days from last Saturday to Wednesday and took Sunday off. He worked a whopping 24 hours straight from Monday to Tuesday, resulting in an astonishing amount take home.
But Holston – who quotes Proverbs 9 when explaining 'the lord doesn't want you to be a slugger' - he could have taken more. Holston said he had to turn down offers because he didn't have the manpower. 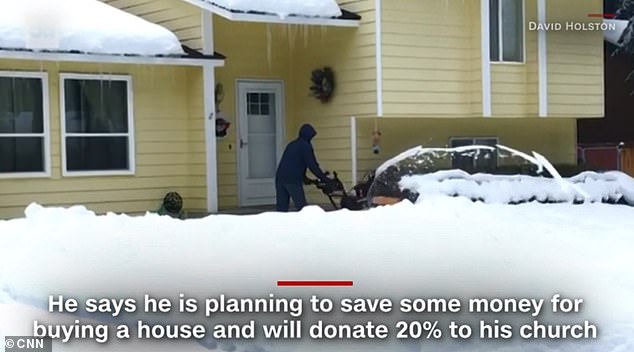 
'I could have employed five plow trucks,' Holston told KIRO Radio 97.3FM. 'If I had a whole crew, I would have sent them all over to Seattle.
'My parents taught me to work … you need to get out there and plow your field, make your living.'
That's exactly what he plans to do as part of his 10-year plan of expanding his business before selling it.
But the grateful teen – who aims to make $100,000 this year - is planning on giving 20 percent of his recent earning to his church. After the $7,000 donation, he'll buy lawn equipment and use the remainder as part of a fund for buying his first house.
Speaking about how the Luke 12:31 Bible verse – 'But seek his kingdom, and these things will be given to you as well' - proved inspiring during his hard work, he added that he was given the opportunities for a reason.
'The Lord blessed me with the money for the sole purpose of advancing his kingdom. All of the glory goes to God!' he exclaimed.