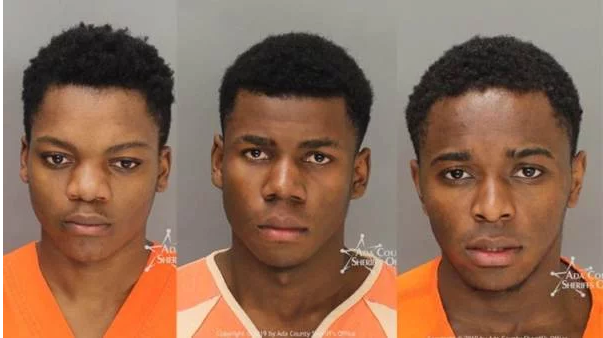 
Three men and a teenage boy were arrested for a gang rape in Kuna, Idaho.
The men face life in prison if convicted.

Iyombelo, Rashidi and Lupango are each refugees from Tanzania.
KTVB reported:

Three men and a teenage boy are in custody after police say they sexually assaulted an 18-year-old woman earlier this month.
Elias Lupango, 19, Rashidi Mulanga, 18 and Swedi Iyombelo, 18, all of Boise, were arrested on felony rape charges and booked into the Ada County Jail Thursday. The juvenile suspect, a 16-year-old boy whose name has not been released, was arrested Friday morning, and is held in Ada County’s Juvenile Detention facility.
Kuna Police began investigating the case Feb. 8. The victim told investigators that she had been with Iyolmbelo, who she had met recently, in a car in a Kuna neighborhood when he began to sexually assault her.
A short time later, she said, the other three suspects showed up, and also sexually assaulted her in the car.
Detectives investigated the case and conducted interviews, ultimately developing enough evidence to get arrest warrants for Lupango, Mulanga, Iyombelo, and the 16-year-old.