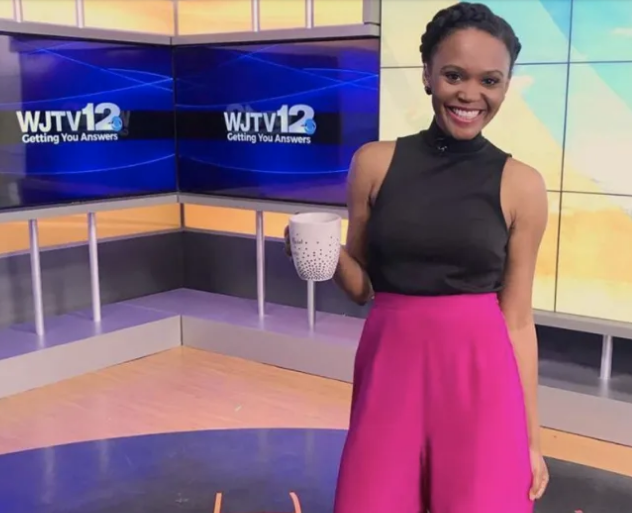 A TV news reporter is speaking out after she says her boss told her she shouldn't wear her natural hair on air because it was unprofessional, likening it to him going to work in a baseball cap.
Brittany Noble-Jones began working as a morning news anchor for WJTV in Jackson, Mississippi, in 2015, the same year she won the NABJ's Emerging Journalist of the Year award.
She told BuzzFeed News' AM2DM that she always straightened her hair before anchoring the show. However, after giving birth to her son in October 2016, Noble-Jones decided to do her hair a different way, for both practical and personal reasons.
For one, it took a lot of time to straighten her hair every day, and she was a new mom. But she also wanted to be an example for her child.
"While I was pregnant I kept wondering, 'How am I going to teach my child to love their own hair if I don't even love my own hair?'" she said.
She said her boss at the station said it was fine if she wore her hair natural. But about a month later, she said he changed his mind.
According to Noble-Jones, her boss said it was the equivalent of "wearing a baseball hat to the grocery store."
"Viewers needed to see a beauty queen," she said her boss said.
Noble-Jones said she internalized the criticism at first, thinking she "didn't look like a beauty queen with my hair." But then, she decided to fight back. She recorded some of her interactions with her boss, who eventually left the station.
However, Noble-Jones said the issues with her hair didn't stop. She filed a complaint with the Equal Employment Opportunity Commission. Shortly after, Noble-Jones said she took some sick leave to care for her dying grandfather.
After that, Noble-Jones was terminated from the station. In a statement, WJTV-TV and its parent company, Nexstar, said the absences were the reason for Noble-Jones' termination, not her hair.
"WJTV-TV and Nexstar Broadcasting, Inc., maintain a strict zero-tolerance policy which prohibits harassment, discrimination or retaliation of any type. Allegations that Ms. Jones’ employment was terminated for her choice of hairstyles have no basis in fact and are vigorously denied," the company said in a statement. "Ms. Jones’ employment was in fact terminated for excessive absenteeism and for her failure to return to work and fulfill her contractual responsibilities after exhausting all available leave time.
"We stand by our decision to terminate Ms. Jones’ employment and vehemently deny her latest publicly-stated version of reasons for her dismissal."
In January, Noble-Jones shared her story on Medium. She said she has received a lot of support, both publicly and privately, from others since speaking out.
Noble-Jones said she also hopes to shed light on the fact that stories about people of color are often overlooked by news stations across the country.
"I hope that by talking about my hair it shines a light on some of the problems we as journalists face in sharing stories about people of color," she said.