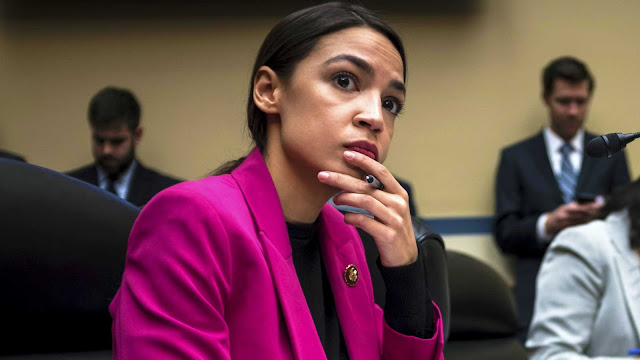 
During an Instagram live video on Friday, the freshman congresswoman said that she thought the wall was a "moral abomination. I think it's like the Berlin Wall."
That Ocasio-Cortez thinks the border wall is "like the Berlin Wall" suggests she knows very little about history and concepts of border security. Former senior official at the U.S. Department of Homeland Security Matt Mayer explains why comparisons between Trump's wall and the Berlin Wall are nonsensical and insulting for those oppressed in East Germany:

The goal of the Berlin Wall: stop East Germans from escaping to West Germany, as roughly three million did from the end of World War II until the wall was built. It divided Berlin for twenty-eight years. In many ways, the Berlin Wall served as a prison wall for East Germans. At least 139 people died at the Berlin Wall. It is hard to believe it has been gone for nearly as long as it was up.
Too often, Americans use the Berlin Wall in the debate over expanding the wall on our border with Mexico. Not only does this usage cheapen the history of the Berlin Wall, it is a terrible analogy. The goal of America's border wall is to keep people and contraband from illegally coming in to the United States, not to prevent Americans from escaping. Unlike with the Berlin Wall, the use of force on the border is significantly restricted by law, including when engaging with violent and well-armed Mexican drug cartels.

"Let's say you love the wall, let's say you want it, point is, it's wrong to hold people's paychecks hostage for it and if you want your wall so bad, go out and convince the American people because 70% of America thinks this is the dumbest idea ever and it's not my problem that the majority of the American public thinks it's a scam, a sham, a monument to white supremacy," Ocasio-Cortez continued. "It's not my fault, not my fault."
Ocasio-Cortez's assertion that 70% of America thinks that a border wall is "the dumbest idea ever," is factually false. Ocasio-Cortez is most likely referring to a January 2019 report from PEW Research that stated that 70% of Democrats say that a wall "would not have much impact on illegal immigration into the U.S."
WATCH:

During a Sunday interview on Fox News, Senior White House official Stephen Miller debunked the notion that a border wall will do little in terms of stopping drugs that come from Mexico.
"I understand that, but 80 to 90 percent of those drugs, don't come across in unfenced areas, they come from ports of entry," Fox News host Chris Wallace said. "Those are your own Customs and Border Patrol numbers."
"But, Chris, the problem with the statement that you're apprehending 80 to 90 percent of the drugs at the ports of entry, that's like saying, you apprehend most contraband at TSA checkpoints at airports," Miller responded. "You apprehend the contraband there because that's where you have the people. That's where you have the screeners."
"I assure you, if we had people at that same density and screeners at that same density across every single inch and mile of the southern border, you'd have more drugs interdicted in those areas," Miller continued. "You don't know what you don't know and you don't catch what you don't catch. But as a matter of national security, you cannot have uncontrolled, unsecured areas of the border where people can pour in undetected."
Partial transcript of Ocasio-Cortez's Instagram live video:

But this wall man, I can't fund it. I cannot, I cannot, vote for a wall. I can't, I can't do it. I can't do it. And especially for my community back at home it's, it's 50% immigrant and most of us if we're not immigrant we're first-generation. And, and, you know it's not to slight those that that voted YES on the wall because it's actually, sorry — it's not they were not voting for the wall, let me make that very clear, they were not voting for the wall — but what's happening is that the Republicans are creating a hostage situation where they're holding everyone's paychecks unless they get more money for, for, a wall.
These two things should not be tied at all, like no matter how you feel about the wall, you know I think it's a moral abomination. I think it's like the Berlin wall. I think it's like any other wall that is designed to separate human beings and block out people who are running away from humanitarian disaster. It's like one of the I just think it's wrong. But you know what? Let's say you love the wall, let's say you want it, point is, it's wrong to hold people's paychecks hostage for it and if you want your wall so bad, go out and convince the American people because 70% of America thinks this is the dumbest idea ever and it's not my problem that the majority of the American public thinks it's a scam, a sham, a monument to white supremacy. It's not my fault, not my fault. So, if you want a wall, go out and campaign on it, go out try to convince your neighbors of it.