At 2:59 PM Guns Were Legal in NZ. At 3:00 PM a Massive Gun Ban Began with Promise of Prison or Fines for Anyone Who Wouldn’t Comply

Terrorism is defined as the use of violence to push political change — and sadly, a terrorist in New Zealand has been able to do just that, rapidly changing the country’s laws in less than a week and possibly getting exactly what he wanted.
Last Friday, a man walked into two mosques in Christchurch, New Zealand, and killed dozens of people. The tragic crime was carried out with what that nation’s government is now calling “military-style semi-automatic weapons,” which are, in fact, some of the most common types of rifles owned by civilians today.
But with almost zero debate and not even an official vote by its House of Representatives, the country’s government has pushed through sweeping gun bans in record time. That executive action essentially turns previously law-abiding citizens into criminals in an afternoon unless they comply and turn in their firearms to the police.
“Cabinet agreed to overhaul the law when it met on Monday, 72 hours after the horrific terrorism act in Christchurch,” the government’s official website reported in a news releaseon Thursday. “Now, six days after this attack, we are announcing a ban on all military-style semi-automatics (MSSA) and assault rifles in New Zealand.” 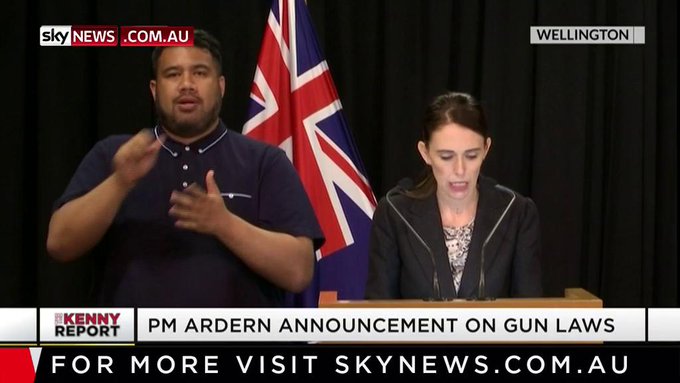 It must be stressed that the governmental body that supposedly represents citizens, New Zealand’s House of Representatives, hasn’t even voted on the measure. The massive ban was done with a  signature at the capital, with officials promising that actual legislation would be passed at a later time.
“Earlier this afternoon, an Order in Council under section 74A(c) of the Arms Act was signed by the Governor-General to reclassify a wider range of semi-automatic weapons under the Act,” the government news site reported. “It came into effect at 3pm today.”
And what exactly are those “military style semi-automatics” that were made instantly illegal? It turns out that the term is pretty deceptive: A huge swath of firearms are now being called MSSAs, even though many have absolutely nothing to do with the military.
Any “semi-automatic firearm capable of being used with a detachable magazine which holds more than five cartridges” is now being called a military-style gun and is essentially illegal, although small .22 caliber rifles are exempt.
That means that your grandfather’s vintage M1 Garand with its eight-round clip would likely be illegal under the new ban, as would any number of common sporting rifles. 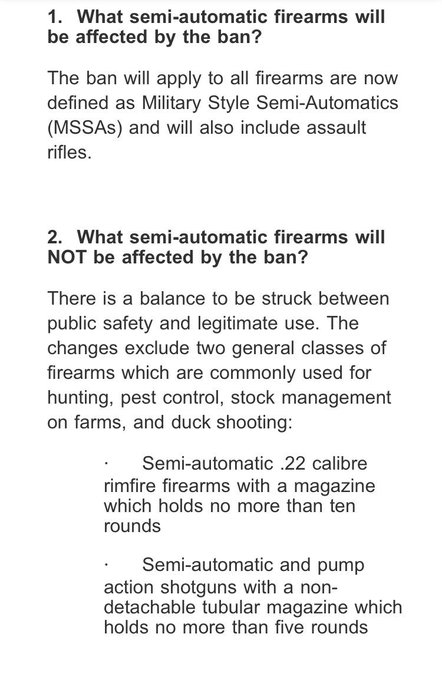 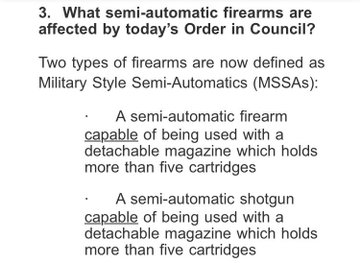 Calla Wahlquist ✔@callapilla
Replying to @callapilla
Ardern’s office sent out this Q&A on the Gun Law changes in NZ. It’s long, will post in stages. These three Q’s address which types of firearms are covered.

Twitter Ads info and privacy
Residents are being told to surrender their previously legal firearms to the police as part of an involuntary buyback program. If they decline or try to safeguard their arms from government officials, they’ll be treated as criminals.
Prime Minister Jacinda Ardern, according to NPR, said “ownership of firearms is a privilege in New Zealand and not a right.” That is exactly why the government was able to move so fast to begin rounding up guns and threatening citizens with criminal penalties if they don’t comply.

There are a few key points here. First, of course, is just how fortunate Americans are to have the Second Amendment, which embeds the right to bear arms in the Constitution itself.
Even so, this should be a wake-up call to the United States: Bureaucrats will do everything they can to end civilian gun ownership for almost any reason. History has shown the dark path where that leads.
Second, it seems almost laughable that this massive gun seizure will have any impact on real criminals. If right now a terrorist is planning a copycat attack in New Zealand, will he shrug and turn over his semi-automatic firearms to the police? Only the naive would think so.
Meanwhile, it’s the law-abiding citizens — such as the victims who were targeted during their worship — who are left defenseless. Police took over half an hour to actually engage and stop the terrorist’s rampage in Christchurch.
Meanwhile, victims who were attacked in their place of worship were forced to defend themselves with makeshift objects including a credit card machine. Yet the government thinks disarming citizens even further will somehow help them.
“To owners who have legitimate uses for their guns, I want to reiterate that the actions being announced today are not because of you, and are not directed at you,” Prime Minster Ardern said, according to the government news release.
But that statement is both hollow and ridiculous. The new bans are directed at law-abiding citizens, without question. It is they, not determined criminals, who will be disarmed.
Finally, the elephant in the room is that the attacker who carried out these acts of terrorism most likely wanted to impact New Zealand’s politics. That is, again, the very definition of terrorism.
A rambling manifesto attributed to the mass shooter made it clear that he definitely had an agenda, bizarre and twisted as it may be. The document he allegedly emailed to many before the attacks openly admits that he wanted to affect public policy and stir up division, sometimes with misdirection.
“Significant portions of the manifesto appear to be an elaborate troll, written to prey on the mainstream media’s worst tendencies,” The Atlantic reported.
Is not one of those worst tendencies to jump to conclusions based on hot takes — the very thing that New Zealand just did?


“This manifesto is a trap,” warned journalist Robert Evans, noting that at “multiple points in the manifesto the author expresses the hope that his massacre will spark further attempts at gun control in the United States which he believes will lead to gun confiscation and a civil war.”