Married teacher, 25, arrested for having sex with her 17-year-old student multiple times while she was supposed to be tutoring him

A former Georgia high school teacher was detained after she was accused of having a sexual relationship with one of her students. 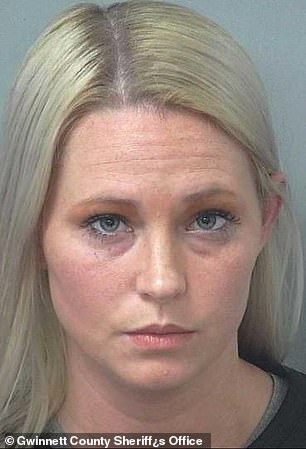 Sarah Katherine Brooks, 25, was charged with a felony count of sexual assault by persons with supervisory or disciplinary authority on Friday, according to jail records from Gwinnett County Jail.
Brooks is said to have had sex during off-campus tutoring with one of her 17-year-old students from Archer High School. The woman was the teen's physical education teacher, at the time.
The boy's mother said that the two had sex on at least three occasions, since October. One of those moments was said to have occurred at their family home while the mom was away at work, AJC reports.
On Tuesday, Archer High School principal Ken Johnson sent a letter to parents explaining that the police were alerted after school officials learned of the alleged affair.
Brooks resigned from the school, soon after.

'On Monday we received a report about this situation and our school immediately contacted the police and the school district's Division of Human Resources,' Johnson said.
'As this has been and continues to be an active police investigation there are not many details I can share. However, I can tell you that the teacher has resigned from Gwinnett County Public Schools and the school system will be forwarding information about these allegations to the Professional Standards Commission.'
'While this is not a situation we have experienced at our school previously, one time is too many. Ethics matter, and the trust our community places in its educators matters to Archer and to Gwinnett County Public Schools. This is not something we take for granted.'
Brooks has been released on $11,200 bond.