A staffing firm has apologized after it posted a job listing that described the ideal candidate as "preferably Caucasian."
Cynet Systems posted the listing for an account manager position on Saturday across multiple websites, including LinkedIn.
"First, we would like to say simply that we truly regret the fact that individuals formerly employed by Cynet Systems went outside of company policy and included an inappropriate requirement in a job listing," Cynet Systems Co-CEO Ashwani Mayur wrote in a statement on Monday. "We understand why some may have been upset seeing this listing, because we were too."
In an earlier post, the company said it had fired the people responsible for the "offensive job post," adding that the listing "does not reflect our core values of inclusivity & equality."

The Washington, D.C.-based firm describes itself as "a top talent supplier for companies across North America."

What exactly did the job listing say?

The listing said it was seeking someone to fill a mid-to-senior level management position with an undisclosed pharmaceutical company, according to USA Today.
The first bullet under the listing's job description read: "Preferably Caucasian who has a good technical background including knowledge of RPA." 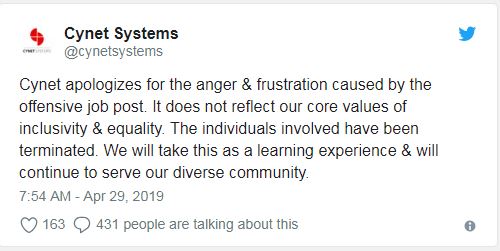 What else did Cynet say?

More than 60 percent of the firm's employees are minorities, according to the company.
"Further, Cynet Systems itself is proud to be an immensely diverse company," Mayur wrote. "Both of our owners are Indian-Americans, our workforce is over 60% minority, and we are certified as a diversity supplier by the National Minority Supplier and Development Council."
Mayur said that the firm was reviewing all ads – "existing and upcoming" – to make sure there were no similar issues, adding that it would be looking at measures that could help us catch offensive or outside of policy ads before they ever go live to ensure this can't happen again." 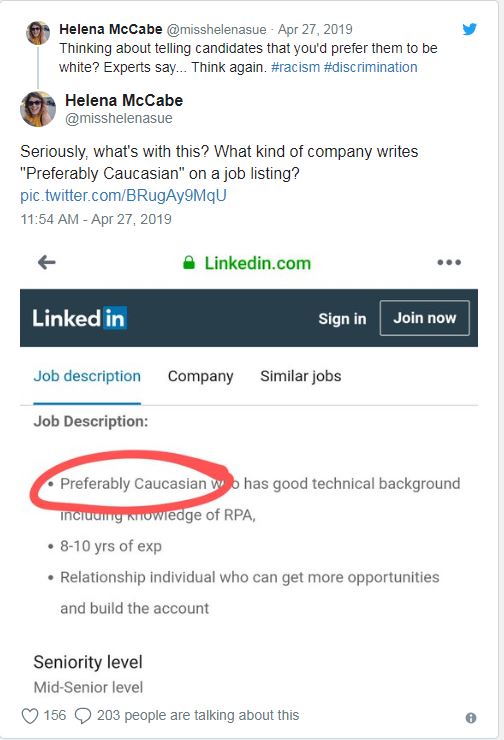 Screenshots shared online showed Cynet had posted another listing for an account management position in Virginia that called for a "female candidate only."
"In another job posting the same company: 'Female Candidates Only.' Sales. Wonder if they are required to wear pantyhose," one Twitter user wrote. 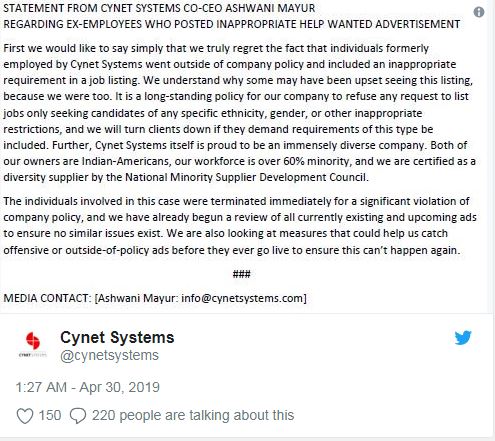 The listing is no longer active or has been modified.
Title VII of the Civil Rights Act of 1964 prohibits employment discrimination based on "race, color, religion, sex and national origin."