Alabama high school football coach at public school performs a mass baptism of his players on the football field. FFRF has filed a complaint. These same Christians would RIOT if a Muslim coach tried to convert his team.... goddamn hypocrites.

It’s bad enough when a public school promotes religion. It’s downright stupid when they publicize how they’re promoting religion for the world to see.
But that’s great news when you’re building a case for a potential lawsuit against them.
In Alabama, a football coach for the Washington County Schools was baptizing players on the field. The whole thing was videotaped and celebrated and broadcast to the public. (You can even hear a man introducing Coach Devon Roberts as the person who made this happen since “none of this would be going on without” him. Roberts is not the man in the image below.) 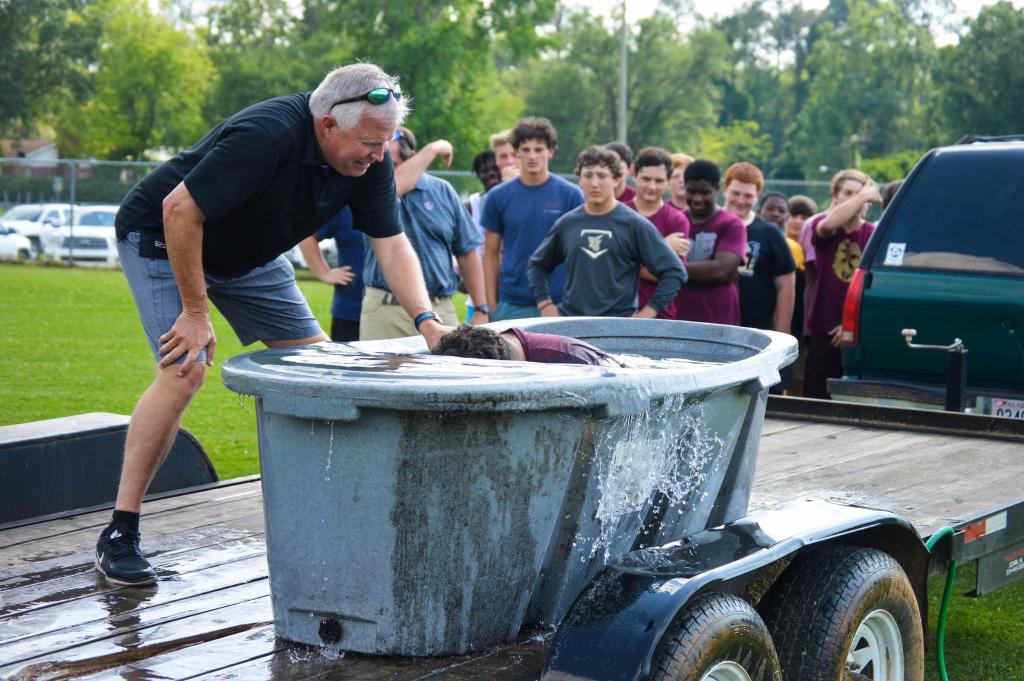 Even the team’s Facebook page shows the baptisms as their banner photo.
Now the Freedom From Religion Foundation wants further explanation from the District and a promise that this will never happen again.

We write to ensure that WCS is no longer including religious rituals during school-sponsored activities. It is inappropriate for a public school district to proselytize students by organizing a team baptism. It is equally inappropriate and unconstitutional for coaches to have participated even if students or the [Fellowship of Christian Athletes] organized the baptism.


Even if it wasn’t illegal — which it absolutely is — there’s another component to this that’s also disturbing:

The conduct at Washington City Schools is especially problematic in the context of athletics, given the pressure players feel to conform to coaches’ expectations, FFRF points out. Student athletes are inclined to mirror the actions of team leaders to garner their favor. Students should not be expected to pray to play, much less to be baptized at a school event. By leading and participating in such events, coaches send a clear message that the athletic staff approves of these activities.
…
“The involvement of a public school coach in baptisms is so over the top as to be ludicrous,” says FFRF Co-President Annie Laurie Gaylor. “You’d be hard-pressed to cite a display of sectarian religiosity more blatant than this.”

Incidentally, Coach Roberts only became the team’s football coach after the previous one took a position with the Fellowship of Christian Athletes. Roberts was bragging about the proselytizing on social media, too.
If any public school coach was helping students become Muslim, you know what the backlash would look like. It shouldn’t be any different when they’re pressured into joining Christianity.