Nobody ever accused Joe Biden of being smart. Or respectful of women. Or non-creepy to children.
But for all his gaffes and screwups, the former vice president has at least stuck with the same underlying principles.
Until now.
Biden, the front-runner by a mile in 2020 Democratic presidential polling, has been a supporter of the Hyde Amendment for as long he has had any position on it. The almost-half-century-old law prohibits taxpayer dollars from funding abortions.
Specifically, health care programs or organizations that provide abortions are not allowed to use federal funds for that service except in cases of rape, incest or risk to the life of the mother.
Historically, Biden has treaded water in the just-left-of-center lane of politics.
But recent changes in the philosophy of the Democratic Party have made such left-centrism out of vogue.
The new Democrats, a team with stars like Alexandria Ocasio-Cortez, Andrew Yang, Beto O’Rourke and Cory Booker, have pushed the party so far to the left that its policies are almost unrecognizable to non-Venezuelans.
It is these new Democrat clowns who placed so much pressure on Biden that he decided to flip-flop on the Hyde Amendment, which he had backed since his time as a senator in the 1970s.
After supporting Hyde just this week, he buckled Thursday night and reversed a position he had held for 40 years.
Biden said he “can no longer support” Hyde because of the Republicans’ assault on “health care” (i.e., abortion) in GOP-led states.
“I can’t justify leaving millions of women without access to the care they need and the ability … to exercise their constitutional protected right,” he said at a fundraiser in Atlanta.

Ryan Saavedra ✔@RealSaavedra
BREAKING: Democrat Joe Biden announces he can no longer support the Hyde Amendment after getting attacked by Democrats over the last 24 hours for supporting it 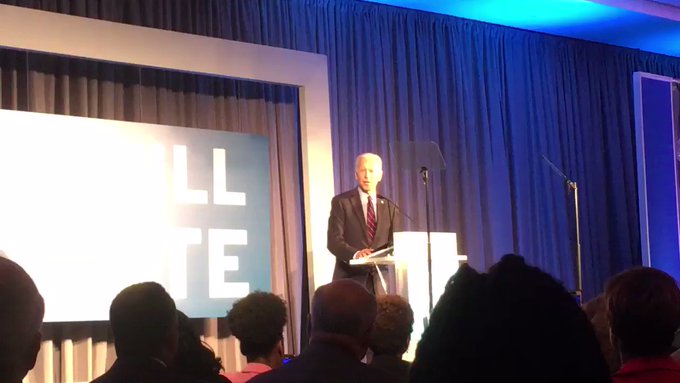 2,772 people are talking about this
See Biden’s logic? Me either.
Apparently he can support a law that stops federal funding of abortions up and until people actually try to stop abortions.
That, apparently, is the final straw for the hair sniffer from Delaware.
For moderate Democrats who found solace in the fact that Biden, while a complete doofus, might not be a socialism-loving reincarnation of Che Guevara, his recent flip should be concerning.
If he abandons his moderate sensibilities, his presidential appeal in the general election is likely to dwindle.
Unlike some of the other Democratic candidates, he has a long history of verbal blunders, shoulder grabs, creepy hugs and kisses, and outright lies, but at least his platform was more toward the center than the other 2020 hopefuls.
Keep an eye on Biden. Not just to protect your daughters and wives, but also to see if his trend leftward continues.
It could be a bad omen for his presidential hopes.