As usual, CNN had this story backward.
When CNN’s Chris Cuomo of “Cuomo Prime Time” brought in his BFF, Don Lemon, to yuk it up this week over the unfortunate fate of an oak tree given the White House by French President Emmanuel Macron last year, both men thought it was a sign of poor relations between the United States and its French ally.
But as the statement Macron gave when he made the gift showed, the tree itself — called the “Friendship Tree” — was a symbol of a tie between the United States and France is far deeper than any two presidential administrations.
And as Macron’s statement on Tuesday showed, symbols can always be replaced.
Together these two are almost guaranteed to embarrass CNN, and Monday was no different when Cuomo hosted an appearance by Lemon and the two could turn their oh-so-sophisticated wit on the death of an oak sapling that was planted on the lawn of the White House.
“Fate is not without a sense of irony,” said Cuomo, sounding like he was cribbing from one of his own five-paragraph essays in 10th grade about “The Scarlet Letter” maybe, or “The Catcher in the Rye.”
“The Friendship Tree has apparently died while in quarantine.”
Lemon, known for his idiotic comments, chimed right in, like a flunky at the cafeteria table for the cool kids.
“Look, I don’t know what happened to the tree,” he said.
“But it is a metaphor for what happened with their bromance, and what’s happening in the country and in the world right now, isn’t it, don’t ya think?”
Don’t ya?
Check out the video here:
Here’s the thing, though. It might be too much to ask of smarmy teenagers, but grown men such as Cuomo and Lemon should realize that tree wasn’t just a symbol of a “bromance” between Macron and President Donald Trump.
It was a symbol of the American blood that was shed heroically on French soil a century ago to save the country during World War I and repay, in part at least, the help France rendered to the American Revolution more than a century before that.
In a Twitter post marking the planting of the tree on the White House lawn in April 2018, Macron wrote: “100 years ago, American soldiers fought in France, in Belleau to defend our freedom. This oak tree (my gift to [Donald Trump]) will be a reminder at the White House of these ties that bind us.” 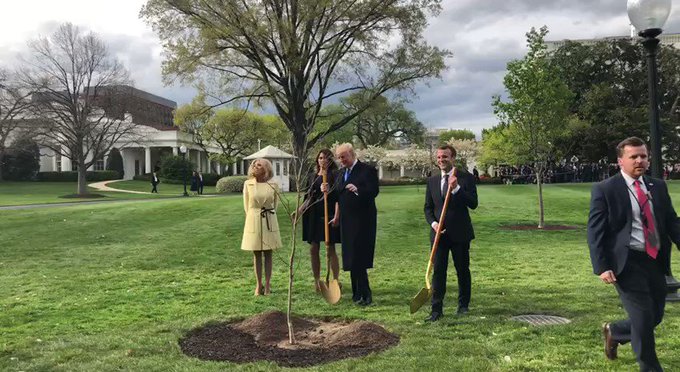 Emmanuel Macron ✔@EmmanuelMacron
100 years ago, American soldiers fought in France, in Belleau to defend our freedom. This oak tree (my gift to @realDonaldTrump) will be a reminder at the White House of these ties that bind us.
8,640
4:34 PM - Apr 24, 2018

3,008 people are talking about this
Twitter Ads info and privacy
Macron was talking about the Battle of Belleau Wood, the first large-scale fighting by Americans in World War I. The Marines stemmed a German advance in fighting that left a butcher’s bill of almost 2,000 Americans dead and about 8,000 wounded or missing.
But hey, Cuomo and Lemon might have been too cool to learn stuff like that in high school.

That alone should be humiliating.
Even more humiliating for these two (it’s hard to believe that this kind of stuff actually needs to be said), but Macron has made it clear that he has no intention of allowing the death of the tree to be the end of the matter.
“We will send him another, it is not a tragedy. It turns out that this oak was put in quarantine for American sanitary reasons and the poor thing did not survive,” Macron told a Swiss broadcaster Tuesday, according to the BBC.
“I’ll send another oak because I think the U.S. Marines and the friendship for freedom between our peoples is well worth it.”
Macron is a young man for a head of state. At 41, he’s younger than both Cuomo, 48, and Lemon, 53, but he appears to have learned at least a sense of history and maturity in his time upon the earth (maybe in his years since high school).
Neither Cuomo nor Lemon seem possessed of either.
Every conservative knows that the United States and France don’t always see eye to eye and probably never will.
There are too many areas where we diverge culturally and politically for that ever to happen (U.S. support for Israel is one example). And sometimes the friction is going to get hot.
But the underlying connection isn’t broken.
In making a joke about a tree as a metaphor for occasional, understandable, strains between the United States and its allies, Cuomo and Lemon were missing the reality that Macron’s statement Tuesday demonstrated.


And getting the story backward – as usual.