Aside from dominating the entire field of 2020 Democratic presidential candidates in all major polls, former Vice President Joe Biden can’t seem to catch a break.
Defending what seems to be a constant stream of criticism from all sides — including accusations of plagiarism surrounding his climate change policy — Biden is facing yet another accusation that he borrowed someone else’s words. This one comes from an unlikely source — disgraced former porn star lawyer Michael Avenatti.
On Thursday during a campaign speech where he railed President Donald Trump, Biden told a crowd that he was going to “make America America again.” While that line brought many cheers from the audience, Avenatti told The Daily Caller in a text message that the slogan was his original creation.
“I used it throughout the US when I was exploring a run. Including in Iowa and at the Wing Ding last year. A supporter of mine even made a video centered on the message. It was my slogan and theme,” Avenatti said.
Surprisingly, he wasn’t lying. The Daily Caller said Avenatti used the line in 2018 in closing at the annual Iowa Wing Ding — an event attended by many presidential hopefuls.
He used the line again in a tweet a month later, when he announced an anti-Trump “resistance” rally in Texas, telling his audience that he was ready to “fight fire with fire.”
Before being slammed with a long list of criminal charges, Avenatti — at the height of his media popularity — announced his intention to run for the presidency.
You can see Biden using the slogan at the rally in the tweet below: 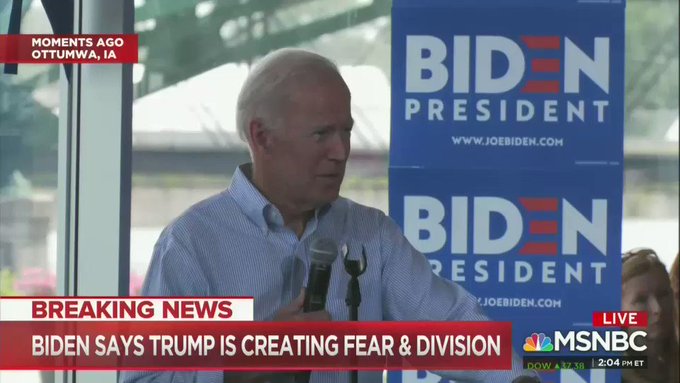 23 people are talking about this
Twitter Ads info and privacy
Luckily for Biden, not much controversy should bubble up around his seemingly borrowed slogan, as Avenatti also told The Daily Caller that Biden’s use of the slogan was acceptable.
“Since I won’t be using it, I guess somebody should because it’s a damn good slogan and message,” Avenatti said.
Biden came under heavy fire earlier this month after he was accused of plagiarizing parts of his announced proposal to fight climate change.
Josh Nelson, co-director of environmentalist group CREDO Action, tweeted an example of at least two instances where Biden lifted the language in his proposal from another source.

Josh Nelson@josh_nelson
· Jun 4, 2019
The paragraph in Joe Biden’s climate plan about carbon capture and sequestration includes language that is remarkably similar to items published previously by the Blue Green Alliance and the Carbon Capture Coalition.

117 people are talking about this

But Biden’s campaign defended the policy, claiming that appropriate citations were “inadvertently” left out of their version.
Plagiarism allegations are nothing new for the former vice president. He withdrew from the 1988 presidential race after being caught plagiarizing and exaggerating his academic record.
Biden has also taken heat over his affinity for what many see as “creepy” interactions with women and young children during televised events. According to CNBC, several women accused Biden of “inappropriate touching.” Biden responded to the accusations by promising to be “more mindful and respectful” of people’s personal space.
Not long after that promise, he joked about the situation at a Washington conference.
The bottom line is that the field of Democratic candidates seems to be a mess.
While Biden has an early and commanding lead on the pack of over 20 candidates, he’s also going to be the primary target of that group. Everything he says and does will be scrutinized and used against him, if at all possible.
And with liberals always saying they’re sick of “old, white men” running for the top office, it’ll be interesting to see just how far his support will take him before the party turns to someone else.


At the very least, Biden will undoubtedly make the 2020 presidential race an unforgettable experience.