In January 2018, 21-year-old Winston-Salem State University football player Najee Ali Baker was gunned while walking toward the parking lot for The Barn, a social space at Wake Forest University where he and his peers had been partying.
More than a year later, Baker’s mother, Jemel Dixon, filed a wrongful-death lawsuit last month against Wake Forest University, the private security personnel that worked the party and others that participated in hosting the event.
Dixon claims school officials acted irresponsibly, allowing an inadequate level of law enforcement at the party.
According to a June 2015 Wake Forest University Police accountability report, events like the one where she lost her son used to require about nine law enforcement officers.
But at the January 2018 party her son attended before being killed, there was only one official policeman present — an officer with the Wake Forest University Police Department, the suit said.
The reduction from roughly nine cops to one was something that happened in part because WFU students complained of racial bias after officers shut down a 2014 gathering run by Kappa Alpha Psi, a predominately black fraternity.
“In response, Wake Forest students organized a town hall meeting in February 2014 to express and discuss their frustrations about alleged racial bias in campus policing,” the suit reads.
The students got their way — sort of.
The 2015 report commissioned by university police recommended equal security measuresfor student events, and said event management should be left up to administrators and law enforcement rather than students.
The school followed neither of those recommendations, and instead allegedly reduced the number of police officers who would have been present to protect party-goers, the Winston-Salem Journal reported.
According to Dixon’s lawsuit, the decision to cut back on law enforcement was detrimental, especially given the rowdy history of The Barn.
The suit claimed it was not uncommon for conflicts at the venue to escalate to the point where they required the intervention of campus police.
“WFU’s decision to replace trained law enforcement personnel with students and third-party event staff had particularly dramatic consequences for the safety and security of student-sponsored events at The Barn, which WFU knew had been the site of prior incidents requiring high levels of law enforcement intervention, including altercations among attendees, and presented unique circumstances and challenges requiring a certain level of police presence and security,” the lawsuit said.
In the end, fewer cops and security checkpoints — where identification was validated — paved the way for bad actors to infiltrate the event, according to the suit.
One of those alleged bad actors, 22-year-old Jakier Shanique Austin, got into an altercation with Baker at the party. Austin is accused of fatally shooting Baker while he was walking toward the parking lot.
Austin was arrested and charged with murder, along with carrying a concealed weapon and possession of a firearm on school property.
His alleged accomplice, 17-year-old Malik Patience Smith — who was allegedly involved in that fateful final confrontation — was charged with multiple firearm-related felonies after his arrest.
Baker’s mother is seeking a minimum of $75,000 in compensatory damages.
The lawsuit also pointed out the school-run program to train students in event management was not adequate.
WFU spokeswoman Katie Neal released a statement regarding Dixon’s lawsuit, saying the school couldn’t comment on pending litigation, but also defending the level of security at the event.
“While we cannot speak to the specific details of the criminal act that occurred on campus, the tragic shooting of Najee Ali Baker was not related to the level of security at the event,” Neal told the Winston Salem Journal.
View image on Twitter 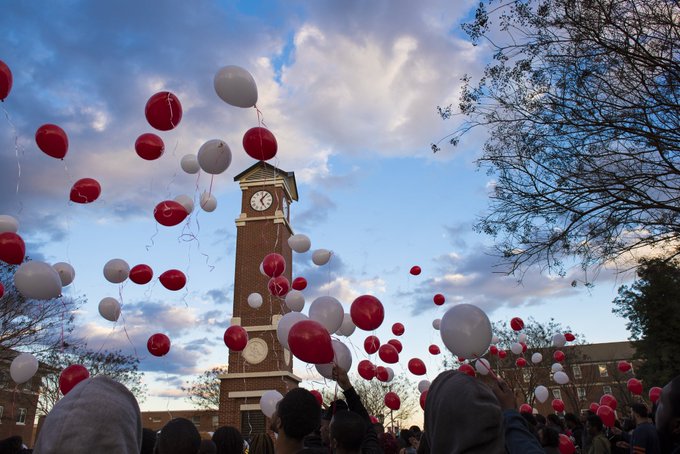 WSSU News@WSSUNews
As we close out 2018, we're taking a look at some of our favorite moments. To get started, we look back at January. The month was a somber one, as Rams remembered one of their own, student Najee Baker, with a balloon release. #YearInReview #WSSUNews #WSSU https://bit.ly/2RamjWz
1
2:53 AM - Dec 27, 2018

See WSSU News's other Tweets
Twitter Ads info and privacy
It’s worth keeping in mind that a police officer’s job is not to ruin fun, but to protect civilians from bodily harm and death.


Had the event at The Barn been properly staffed by law enforcement officers, Baker might still be alive today.