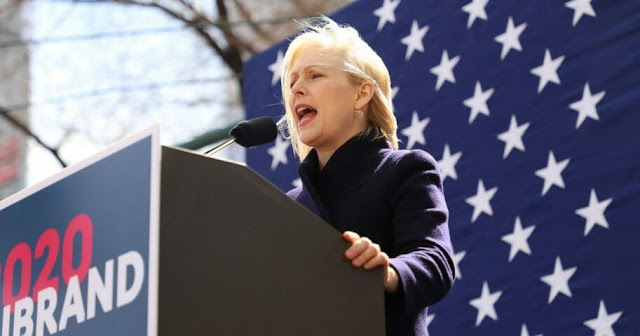 Sen. Kirsten Gillibrand, a struggling 2020 Democratic presidential hopeful, loves to use the story of the tragic 2009 shooting death of a young, Brooklyn girl to explain why she changed her stance on firearms over the years.
But the deceased girl’s mother paints a different picture, one that suggests Gillbrand used her daughter’s death for political expediency instead of genuinely caring about what happened to her and why.
Gillibrand’s 2014 memoir “Off The Sidelines” tells the story of 17-year-old Nyasia Pryear-Yard, who was struck by a stray bullet while attending a teen dance club. The death of the teen was horrific and stunning for her community.
According to the Washington Post, Gillibrand visited the deceased teen’s high school two weeks after taking over Hillary Clinton’s vacated senate seat to meet and speak with her mother, Jennifer Pryear. At the meeting, the grieving mother begged Gillibrand to do something about her daughter’s shooting death.
Though Gillibrand once held an impressive “A” rating from the National Rifle Association, after meeting Pryear at the high school she claimed everything changed and that she “couldn’t have been more wrong” about firearms. She promised Pryear that her daughter’s death “won’t be in vain.”
But, fast-forward 10 years down the road and you will find it pretty obvious that Gillibrand played the family like a golden political token.
“And after standing behind Gillibrand at a news conference about gun control a few months later, Pryear never heard from Gillibrand again,” the Washington Post reporter wrote.
“She had no clue that the senator still spoke about her daughter until a Washington Post reporter told her.”
Rubbing salt into the wound, Gillibrand’s office said that the reason they didn’t reach out to Pryear over the course of a decade is because they didn’t have her phone number or any way to contact her. As the Post piece points out, she still lives in the same house and has the same phone number as she did when her daughter was taken from her.
Pryear is apparently not very impressed with the senator, either.
“I think I did help to change her mind, but I’m not sure she really felt it,” Pryear said. “You would think she would give a phone call or send a card. If you really care, you follow up … Meanwhile, I am still coming home to an empty home and kids are still getting shot in Brooklyn.”
In her book, Gillibrand wrote, “I committed myself to doing whatever I could to end gun violence in this country. My decision wasn’t a calculated evolution, as some speculated, and it wasn’t a political consideration. It was my clear answer to the intensity of Nyasia’s parents’ pain and the collective misery of her community. There was no other possible course.”
Nice try on that one, senator. But it’s so clear that you used the situation to display your flip-flop on gun rights after taking a new political seat that even the Washington Post even called you out. That’s saying something.
Democrats use tragedies like Pryear-Yard’s to inject extreme emotion into an issue like gun rights because anyone in Washington knows that emotion equals votes.
Even though using Pryear-Yard’s death to push gun control is silly on its own, the least Gillibrand could have done was take full ownership and carve out a little time to keep in touch with the mother.
Be warned, liberal voters. Democrats will continue to use you until you’re no longer politically convenient. Pryear’s story was a perfect example of that.