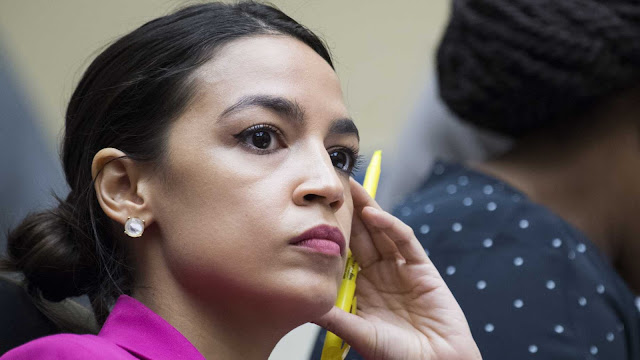 Socialist Rep. Alexandria Ocasio-Cortez (D-NY) was shut down earlier this week during a House Oversight Committee hearing on white supremacy after she tried to grandstand a top FBI official.

During the hearing, Ocasio-Cortez asked Michael McGarrity, the assistant director of the Counterterrorism Division at the FBI, why the FBI did not classify the church shooting in Charleston and the Tree of Life synagogue shooting in Pittsburgh as domestic terrorist attacks.
"That's not correct," McGarrity responded. "I don't know who told you that we didn't but we certainly had cases open on them in both those cases and I wasn't here for the [Charleston] case but it's certainly in our own Department of Justice civil rights about 3-4 weeks ago in their testimony actually stated that it was a domestic terrorism event, charged through the Civil Rights Division of the Department of Justice for a hate crime. I was here for the tree of life, I will tell you I remember that days distinctly it was worked as both a domestic terrorism case and a hate crimes case and it still worked that way."
Ocasio-Cortez then asked if the attacker in the Charleston church shooting was charged with domestic terrorism, to which McGarrity responded: "So you're using the word charge, as I said before there's no domestic terrorism charge like 18 USC § 2339 ABCD for a foreign terrorist organization. So what we do both on the international terrorism side with the homegrown of on extremist and domestic terrorism, we'll use any tool in the toolkit to arrest them hopefully left of attack."
After several moments of back and forth, Ocasio-Cortez again asked McGarrity, "But the actual charge, was it, was the actual charge domestic terrorism?"
"You're not going to find an actual charge of domestic terrorism out there if you look at Title 18--" McGarrity said before being cut off by Ocasio-Cortez.
"It says here that, but, at the San Bernardino shooting or the Orlando pulse nightclub shooting they were designated and charged as domestic terrorist incidents," Ocasio-Cortez said.
"They were, they were charged, I'd have to go back and look, they were charged likely with if there was a connection to a foreign terrorist organization, it would likely fall under 18 USC § 23 A or B," McGarrity responded.
Ocasio-Cortez then suggested that those perpetrators were unfairly charged with terrorism because they were Muslim.
WATCH:


Later, Rep. Chip Roy (R-TX) used his time to give Ocasio-Cortez an education on the subject.
"Is it safe to say there's a distinction when we're talking about foreign terrorist organizations and if you're talking about the concept of a domestic terrorist organization or entity that there are some constitutional questions that arise right that are distinct between our focusing on our intelligence gathering and our efforts and criminal activities more focusing on foreign terrorist organizations -- communications they have with American citizens, how we surveilled that information, what we do with that information -- versus targeting domestic only American citizens or at least those are permanent legal status, right?" Roy said. "There's a distinction there that complicates a bit how we would set up a criminal structure to target 'domestic terrorism,' is that a fair statement?"
"Yes," McGarrity responded.
WATCH:


Ocasio-Cortez, apparently embarrassed by the hearing, took to Twitter to make misleading and false statements, tweeting: "This hearing was wild. First the FBI witness tried to say I was wrong. I tried to be generous + give benefit of doubt, but then we checked. I wasn’t. Violence by Muslims is routinely treated as 'terrorism,' White Supremacist violence isn’t. Neo-Nazis are getting off the hook."
Ocasio-Cortez made her remarks in a quote tweet of a deceptively edited video from the far-left propaganda group NowThis.
In March, The Intercept reported that the fact that domestic terrorists are not officially charged with domestic terrorism drives "a false narrative that domestic terrorism is not punishable under existing anti-terrorism laws."
"In fact, the government has ample room to go after domestic terrorism under existing laws," The Intercept added. "The material support law has two parts. The first can be applied to anyone who commits or assists with a terrorist attack, including one rooted in a domestic ideology, so long as the crime involves one of about 50 proscribed offenses, including bombing government buildings, murdering government employees, using weapons of mass destruction, and hostage taking. The second and more controversial allows the Justice Department to prosecute anyone supporting or working with a State Department-designated foreign terrorist organization, however minor their role in an attack or plot, including even unwitting targets of FBI undercover stings who never were in contact with actual terrorists. Civil libertarians have for two decades criticized the material support law, but primarily for the abuses possible in the more expansive provision for international terrorists. The more limited provision for domestic terrorism is harder for prosecutors to abuse."