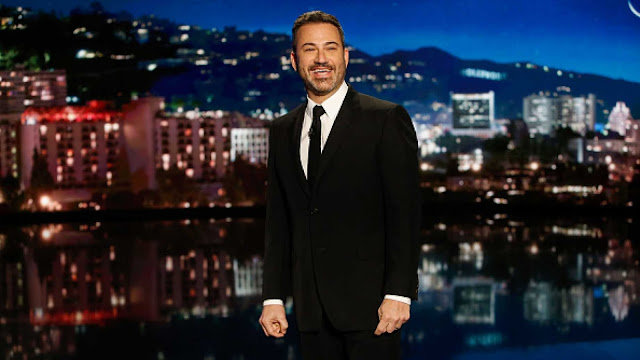 Jimmy Kimmel used his opening monologue on Thursday night to attack pro-life states for passing what he described as "strict anti-choice laws."


"Several southern states are doing what they can to overturn Roe v. Wade," Kimmel said. "Conservatives in Mississippi, Georgia, and Alabama have enacted new anti-abortion laws, with the hope they can get the Supreme Court to reverse its decision on the landmark case. Alabama has enacted a near total abortion ban, which is very scary. No woman should ever be forced to raise a child in Alabama. It just shouldn’t happen."
The audience cheered on Kimmel's denunciation of Alabama as a state so terrible that children should not even be raised there after being born.
"Pro-lifers insist they’re not anti-choice, they say women are still free to pick the name of the baby with the husband’s permission of course, but these strict anti-choice laws put women’s reproductive rights at risk and thanks to these laws, not only is the right to get an abortion being threatened, even birth control is becoming more difficult to get," Kimmel continued.
The segment then segued into a mean-spirited mock PSA starring actress Rachel Bloom ("Crazy Ex-Girlfriend") as a woman pondering several different "choices" upon learning that her state banned abortion and abortifacient contraceptives like Plan B.
"Now that you’re actually pregnant, it’s time to consider other options. Plan D. D is for doctor. Just find someone who claims to be one on Craigslist. Meet them behind a Popeye’s Fried Chicken and voila. Who says women don’t have the right to choose?" the announcer says in the video as a pregnant woman prepares to undergo a creepy back-alley abortion.
The mock PSA ends with the woman holding two babies in her arms and the announcer essentially declaring her to be "f***ed."
Kimmel is not the only late-night comedian to denounce the pro-life laws in states like Alabama, Georgia, and Missouri. Stephen Colbert recently issued a nastymonologue where he not only mocked the lawmakers of Alabama for enacting a strict anti-abortion law but also mocked the very idea that unborn babies are human beings.
"That is either an overreach by the Alabama G.O.P. or some pretty intense viral marketing for the new season of ‘The Handmaid’s Tale,'" Colbert said. "I don’t get it. If a TV show has to become reality, why can’t it be ‘Star Trek’ so they can beam me off of this planet?"
Colbert later played the old "pro-lifers are stuck in the 19th-century" card. "They’re going to throw them right in the Alabama slammer for 99 years," he said. "Let’s see, it’s 2019, so by the time those doctors get out of jail in Alabama, it will be 1895."