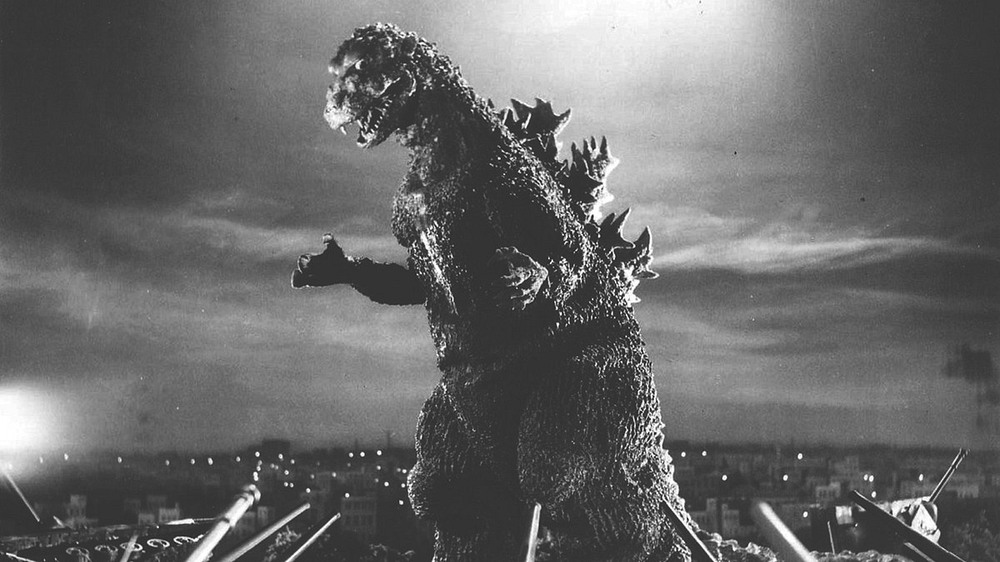 Tucked away in a corner of Yumenoshima Park in Tokyo, a ten-minute-walk away from Shin Kiba Station, is a tall A-frame building. Sitting inside on concrete floors and held aloft by metal supports is a weathered 94-foot long fishing boat. Today the boat is largely-forgotten, but sixty five years ago, this unremarkable 140-ton boat was the symbol of protest against nuclear weapons, and an inspiration for a very enduring pop culture icon.
The boat named Daigo Fukuryu Maru, or Lucky Dragon 5, was built in 1947 in Wakayama Prefecture as a bonito fishing boat, but was later remodeled as a deep-sea tuna fishing vessel. In those days, wooden vessels were allowed to venture out into the deep sea, and the Lucky Dragon No. 5 underwent five ocean voyages, the last of which began on January 22, 1954. That morning, the Lucky Dragon departed its home port of Yaizu, Shizuoka Prefecture, captained by a young and inexperienced 22-year-old named Hisakichi Tsutsui. The boat was small and underpowered, capable of only 5 knots, and had a crew of twenty three.
On February 9, the men were fishing south of Midway Island when their trawl nets got entangled in coral reefs, requiring them to cut loose the lines. Having lost most of their nets to the sea, the captain made the decision to head south to try their luck on the richer fishing grounds around the Marshall Islands.
Nearly 18 months earlier, the US State Department had notified the Japanese Maritime Safety Agency to stay clear of Enewetak Atoll because of planned nuclear tests. A year later, and five months prior to the test, the US issued another notice where they announced that the danger zone had been expanded eastwards incorporating waters around Bikini Atoll. Nobody on board Lucky Dragon was aware of the expanded exclusion zone. Captain Hisakichi thought as long as they stayed away from Enewetak his crew was safe. 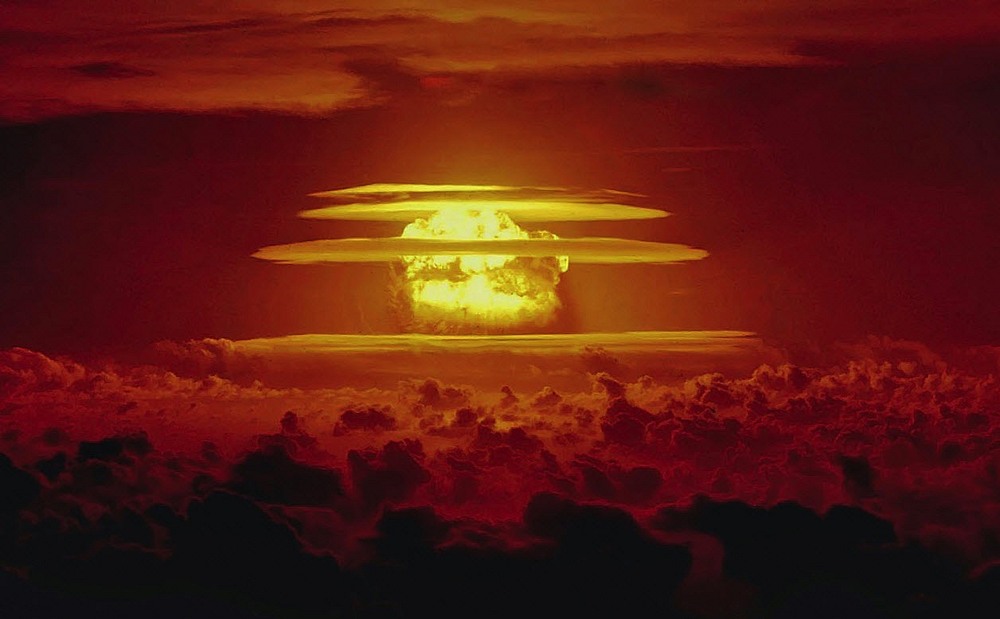 The Castle Bravo nuclear test.
At 6.45 AM on March 1, 1954, on what was to be the Lucky Dragon’s last day of fishing before returning to Yaizu, the crew were still getting out of their bunks when the western sky lit up by the flash of a 7-kilometer-wide fireball. Castle Bravo was the US’s first hydrogen bomb and the most powerful nuclear device detonated. It was too powerful, in fact. Castle Bravo's engineers had erred in calculating the yield of the weapon. What was supposed to be a 6 megaton explosion, erupted over the island with the force of 15 megaton of TNT, or a thousand times more powerful than the one that leveled the city of Hiroshima just nine years earlier.
The crew of Lucky Dragon rushed to the deck to watch in astonishment at the glowing sky. Minutes later, the blast of the detonation gently rocked their boat. The Lucky Dragon was situated about 130 kilometers away from the hypocenter, safe from the immediate effects of the blast, but still perilously close to the fallout. 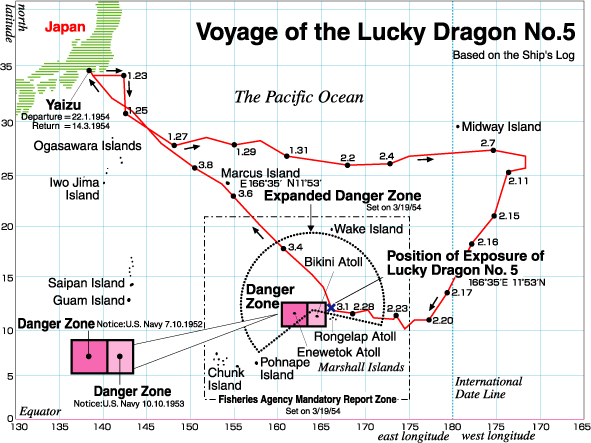 Five hours later, the plume of radioactive cloud that had soared to the edge of the atmosphere, began to rain down upon the vessel in the form of ash and fine dust of pulverized coral, impregnated with a “toxic cocktail of radioactive isotopes, including strontium-90, cesium-137, selenium-141 and uranium-237.” For six hours the crew worked on the deck pulling the lines, inhaling the toxic concoction. The white particles got into their eyes, nose, ears, and mouth. It prickled and stung and inflamed their eyes. The crew had no idea the dust, later nicknamed shi no hai or “death ash”, was dangerous. They scooped the dust off the deck with their bare hands. One fisherman, Matashichi Oishi, even took a lick of the dust, which he described as gritty but with no taste. 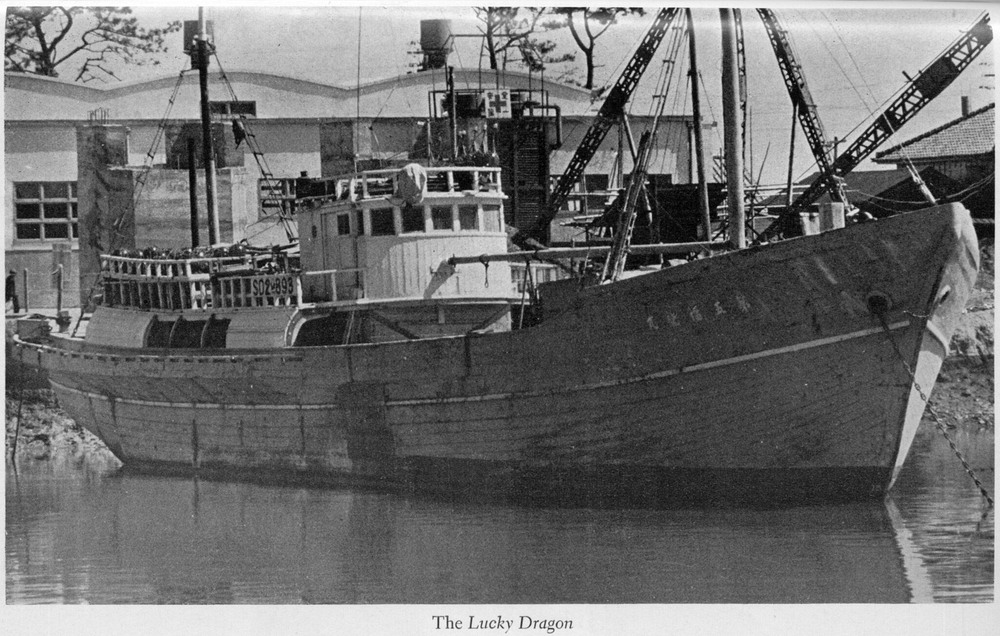 That same evening, crew members started showing symptoms of acute radiation poisoning such as skin burns, nausea, vomiting, and bleeding from the gum, that only worsened during the two-week voyage back home.
On reaching Yaizu, the crew was whisked away to a hospital and put under quarantine. Their heads were shaved and their irradiated clothing and possessions were buried. The ship itself was impounded, but not before the contaminated catch had been distributed across the country and consumed. Six months later, Castle Bravo claimed its first victim—the chief radio operator Aikichi Kuboyama, aged 40.
The US Government initially denied that the crew had been exposed to radioactive fallout. They refused to disclose the fallout's composition because they feared that doing so would give their arch rival, the Soviet Union, key information about the nuclear device’s composition and design. When the US government finally acknowledged that the Castle Bravo test had gone frighteningly wrong affecting a much larger area, it was revealed that in addition to Lucky Dragon more than a hundred other fishing boats were contaminated to some degree by the fallout. The price of tuna plunged due to fears over radiation, and tons of fish caught from March through December were found to be unfit for consumption and were destroyed. The FDA itself imposed rigid restrictions on tuna imports into the United States. 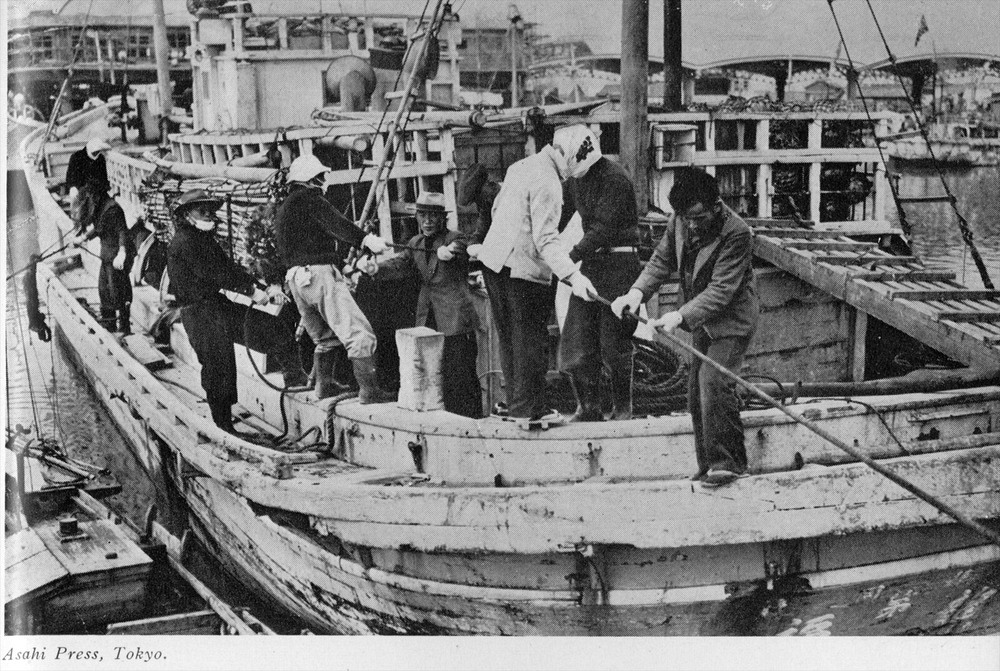 The Lucky Dragon, March 17, 1954. It is in the process of being moved from the main pier to the opposite shore, where it will be isolated. 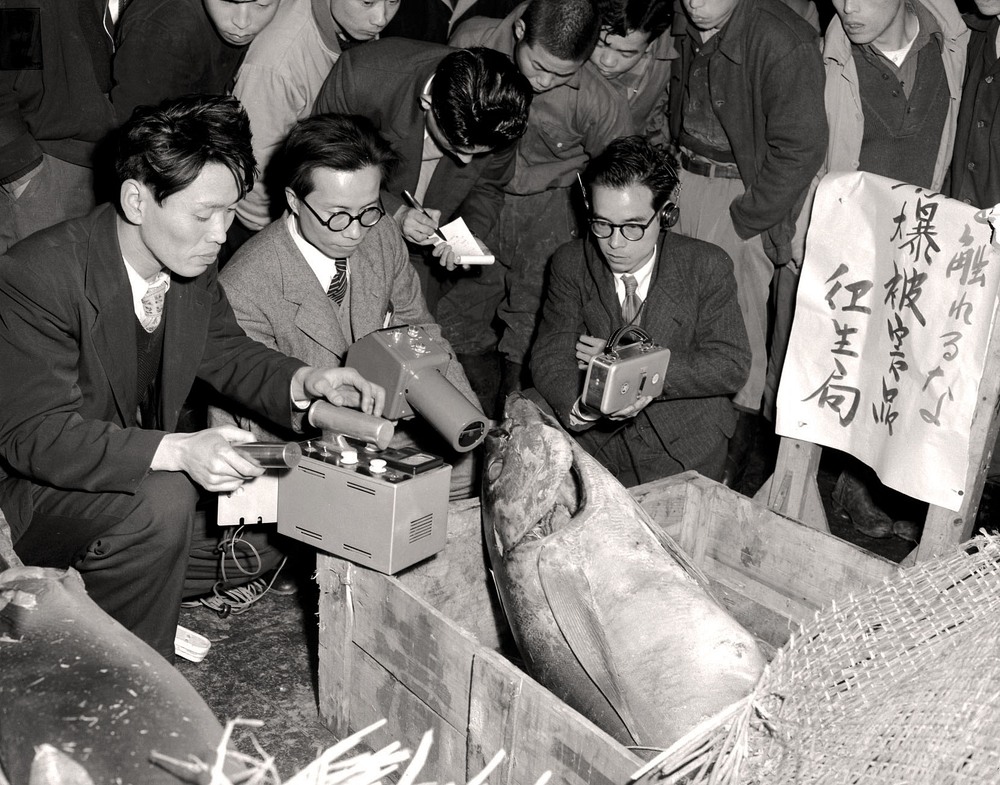 Officials from Tokyo Metropolitan Government measure radiation levels of tuna from the Lucky Dragon's catch at the city's Tsukiji fish market in March 1954. 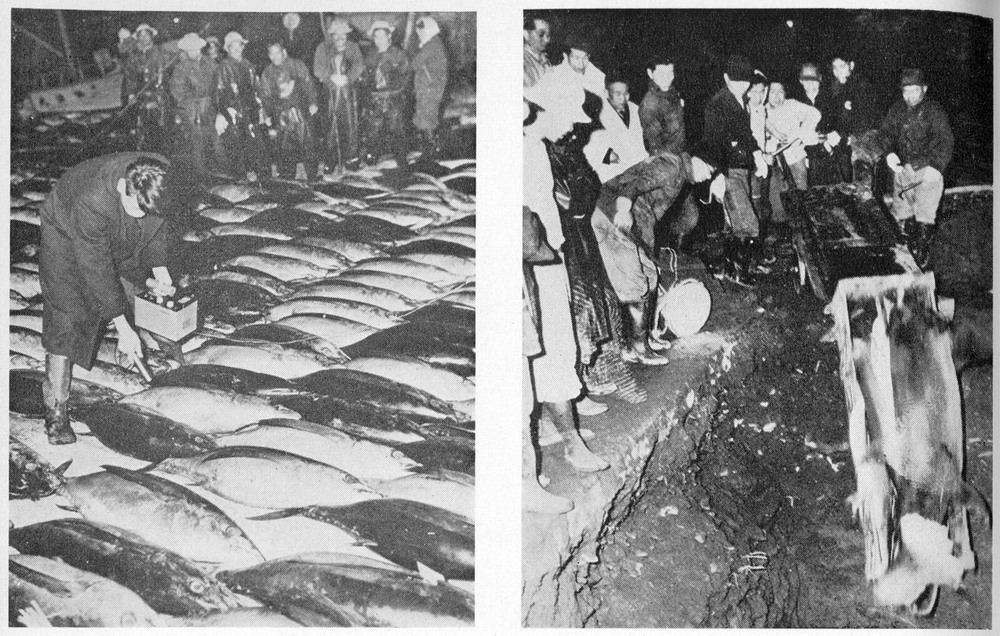 An inspector checks each fish which arrives in port to find out if it can be eaten. If the fish is considered safe to eat, it is stamped to indicate this. Fish that is found too radioactive to eat is disposed by burying them deep in the ground.
The Castle Bravo test and the tragedy of the Lucky Dragon gave rise to a fierce anti-nuclear movement in Japan. A nationwide signature campaign against nuclear testing gathered more than 32 million signatures, or one third of Japan's population. Eventually, the US government agreed to pay compensation to the victims of the Castle Bravo test, transferring some $15 million to the Japanese. The surviving crew of the Lucky Dragon received about ¥ 2 million each ($52,000 in 2019).
Only three months after the incident with the fishing boat, Japanese film director Ishirō Honda released the first ever Godzilla movie Gojira. In the opening scene, a group of fishermen is shown relaxing on a boat, playing checkers and strumming guitars, when a sudden thunderous boom disrupts them, and they run to the railings of the ship to investigate. As they watch the mushroom cloud erupt in the distance, the blast wave hits them overturning their boat. The ship plunges to the bottom with the crew on board.

Theoretical poster for the 1954 movie Gojira, the first Godzilla movie.
Godzilla became an allegory of nuclear weapons—a monster that embodied mankind’s corruption of the natural world through nuclear weapons. Meanwhile, the boat itself was cleaned and purchased by Tokyo University of Fisheries, who put it to use as a training vessel. It retired from service in 1967, and was purchased by the Tokyo Metropolitan Government. The boat was restored and in 1976 the exhibition hall in Yumenoshima Park, in Tokyo’s Koto Ward, opened to the public. In addition to the actual ship, visitors can see a variety of artifacts from the ill-fated voyage, including its log, radio, and items owned by the crew. 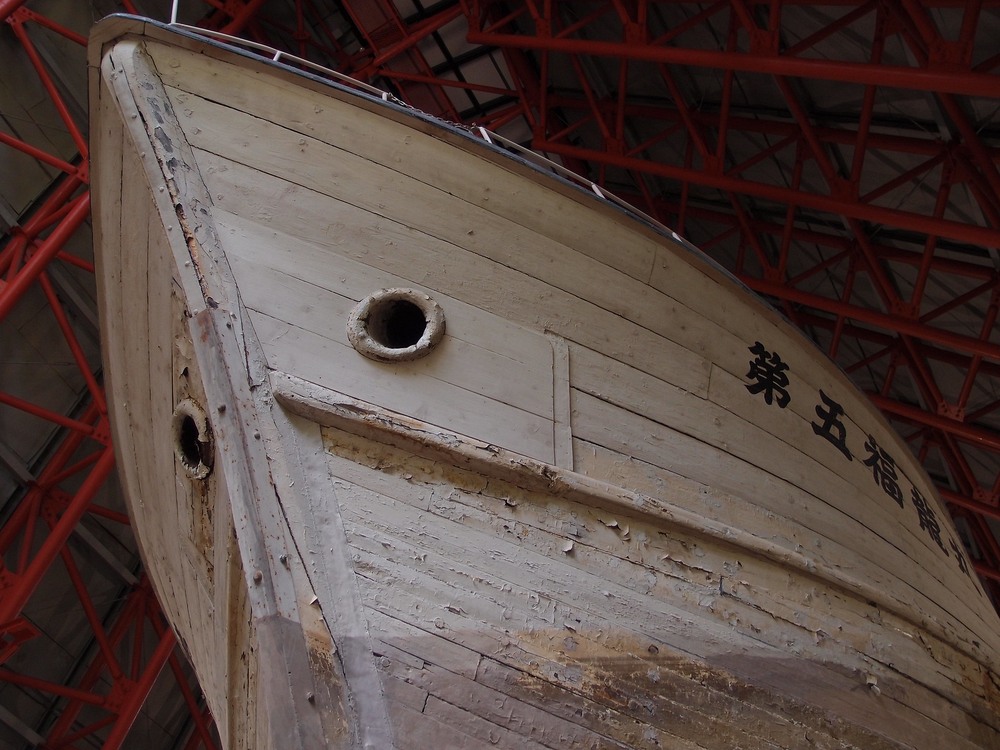 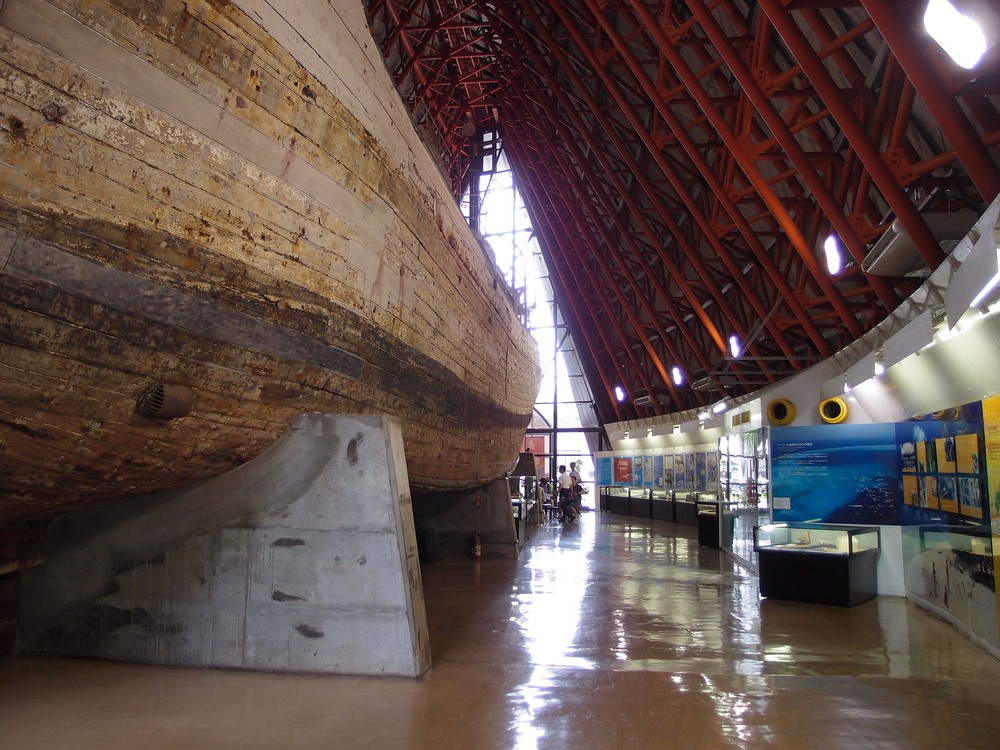 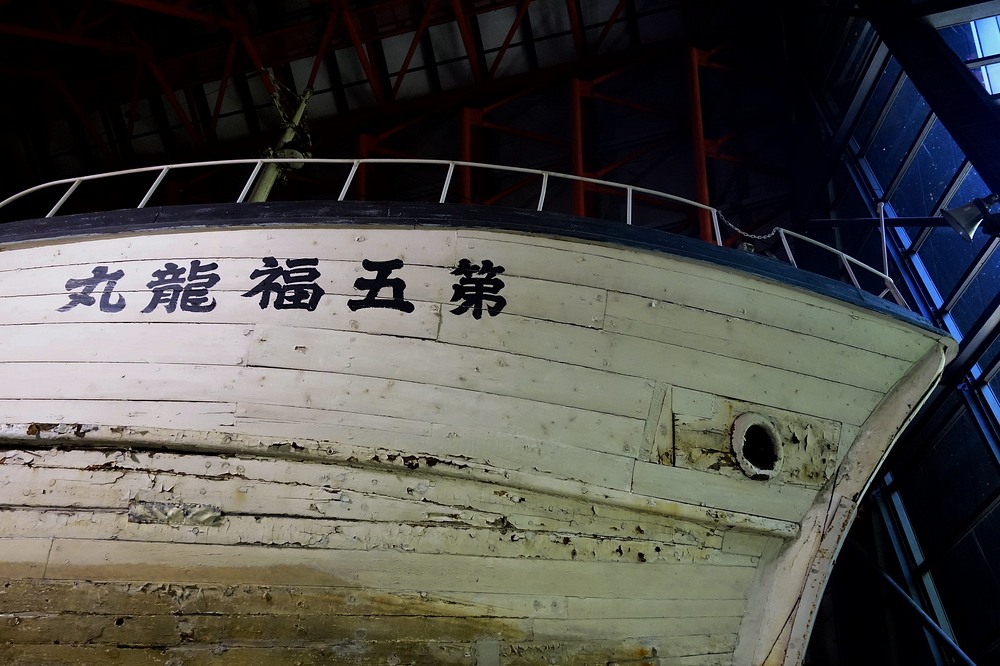