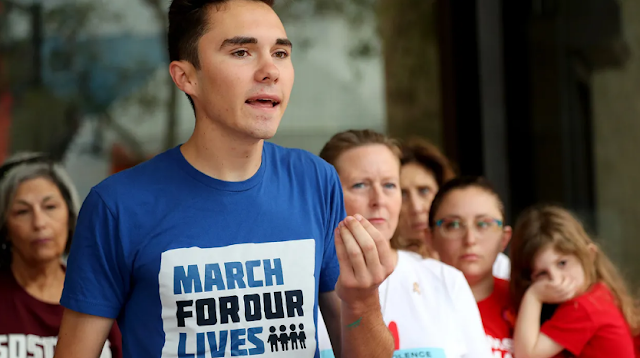 David Hogg, one of the founders of the March For Our Lives gun control advocacy group, said if he is ever shot and killed he wants his dead body to lay outside the front door of the National Rifle Association's headquarters in Fairfax, Virginia, according to The Daily Caller.

Hogg has been a gun control activist since surviving the mass murder at Marjory Stoneman Douglas High School in Parkland, Florida, in February 2018. He said he wants his death to be used to advance the gun control cause.

"If I die from gun violence I want my photo published, there will be those that say you are politicizing tragedy — They are wrong, not doing anything to stop it this (sic) violence is politicizing tragedy. #MyLastShot," Hogg wrote on Twitter. "In the event I am killed, organize, mobilize and get the Peace Plan passed and put my body on the NRA's doorstep in Fairfax, VA."

Hogg called for his followers to use the hashtag #MyLastShot to express their desire to have their photos published if they die from gun violence.
The Peace Plan Hogg references is the recent gun control agenda released by March For Our Lives that is essentially a compilation of the most ambitious gun control initiatives that have been proposed over recent years.

The Peace Plan for a Safer America calls for a national gun ownership registry, an assault weapons ban, a ban on high-capacity magazines "and other weapons of war," red flag laws, and a national gun buyback program.

The plan proposes a minimum gun ownership age of 21 and a limit of one firearm purchase per month.

Another March For Our Lives co-founder, Jaclyn Corin, referred to the plan as a "Green New Deal, but for guns," referencing the unrealistic climate change plan co-written by Rep. Alexandria Ocasio-Cortez (D-N.Y.) and Sen. Ed Markey (D-Mass.) that was so extreme that not a single Democratic senator voted for it.